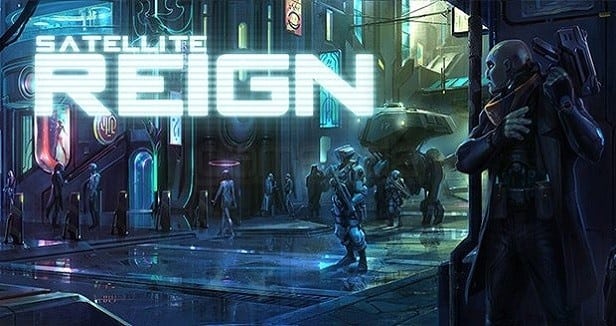 From the get-go, Satellite Reign throws you headfirst into its rich art design and immerses you in a sea of neon lights straight out of your favourite dystopian cyberpunk fiction. In this dark and grimy world, you are a team of four Black Op agents working for a rebel company trying to bring down the tyrannical Dracogenics corporation, who have the technology to let the rich (and only the rich) live forever.

Satellite Reign is actually a spiritual sequel to the Syndicate series, which shared a similar premise and was truly groundbreaking in its day. Like in Syndicate, gameplay in Satellite Reign is a sort of tactical real-time strategy, somewhere between XCOM: Enemy Unknown and the likes of Starcraft 2.

Each member of your squad has a distinct set of abilities to help you complete different types of objectives and each has their own skill tree, allowing you to pick the upgrades that suit your style of play. Just like XCOM, kitting out your soldiers is a big part of the fun, though here you do not have to worry about the awkward inconvenience of death. Your morally grey company conveniently has access to a prototype version of Dracogenics’ tech, meaning that when your guys bite the dust their consciousness can simply be downloaded into a new clone body grown out of parts harvested from the general public.

It is little flavour details like this with the constant rain and dingy streets bathed in unnatural light that help transport you into a world reminiscent of Blade Runner or Ghost in the Shell. But Satellite Reign does not just look cinematic, it feels incredibly cinematic as you watch your meticulous plan fall apart because of the tiniest mistake. This will then snowball into a scenario entirely different from the one you imagined yourself in, just like the very best thrillers and heist films.

This is thanks to the vast open world the game lets you loose in, allowing you to pick and choose the jobs you take on by simply breaking into whichever facility takes your fancy. Within each compound there are multiple paths to each objective reminiscent of the Deus Ex franchise, another brilliant cyberpunk world.

The painting Satellite Reign paints for you is almost perfect, but there are a few niggles I could not help noticing during my play-through. The voice actor for Tag, your comms officer who guides you through the game, felt a bit wooden at times, breaking the illusion momentarily. The movement controls and myriad of keybindings you need to learn can also feel unfamiliar, even to those well-seasoned in RTS gameplay.

However, these issues are well worth living with, both for the rich atmosphere and brilliant emergent gameplay. You can buy Satellite Reign for £22.99 on the Steam Store and, in my opinion, it is worth every penny.