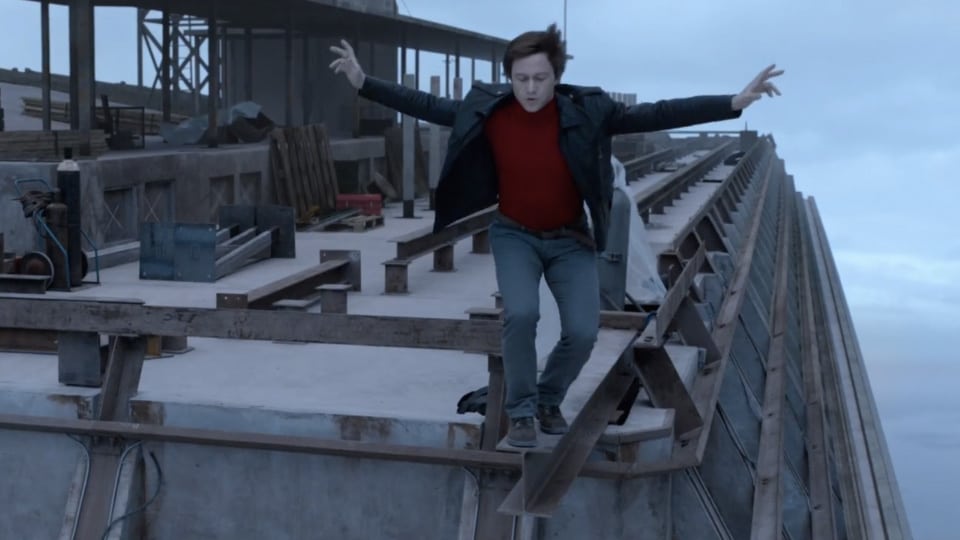 Allow me to begin by saying this—the film’s depiction of Philippe Petit’s high-wire walk between the Twin Towers (from which it gets its rather bland title) is every bit as terrifying and visually stunning as you’ve heard. The brilliant use of 3D and IMAX for the sequence would make even the hardiest of souls feel unbearably vertiginous. And I’m pleased to be able to report this, because it’s just about the only thing I can say in The Walk’s defence.

Many viewers will already be familiar with the story at hand from James Marsh’s 2008 documentary Man on Wire, and this is the film on the subject that I would recommend with a banner raised high.

That film never failed to be engaging at any moment. The Walk, on the other hand, forces us to toil through what many will deem the ‘boring bits’ before we get our £10 worth. A whole half-hour of the film’s two-hour runtime is dedicated to Petit’s backstory, in which he goes through the highs and lows of starting out as a circus performer. He rises, he falls, he brushes himself down and he tries again. This kind of narrative is nothing new and adds little to the story. Even Joseph Gordon-Levitt’s charming narration cannot save the first quarter of the film from feeling like nothing more than flab.

There are many angles from which this story could have been approached. The film’s first few minutes offer us a promising set up when Philippe Petit (Joesph Gordon-Levitt) tells us that he does not fear death, and that risking everything on this high-wire stunt is his idea of life. A character study of such a daredevil could have made for a fascinating picture; unfortunately, director Robert Zemeckis (Back to the Future, Forrest Gump) ends up deciding to backtrack on this and to make artistry the thematic foundation of The Walk.

While this is not an inherently bad idea, the more we hear Petit’s frequent whining about his desire to create a great artistic performance in his moments of crisis of confidence, the more irritating and unsympathetic he becomes.

We are supposed to root for this guy to survive his perilous stunt, but his character is too uninteresting for us to really care. Gordon-Levitt does the best he can with what he has, but even the best of actors can’t save a bad script. His questionable—and frankly jarring—attempt at a French accent doesn’t help.

Speaking of one-dimensional characters, I can barely bother to recall the cast of supporting roles in this movie. Petit’s entire team is made up of single trait characters—we have ‘the one who cares about him’, ‘the crafty one’, ‘the one who is scared of heights’. If I were to talk about them for much longer, I feel they would drag me down to their own catastrophic levels of dullness, so I shall leave this point here.

The visual spectacle of the film’s final act does deliver a long awaited shift-up in gear, but is it even worth the wait? Okay, we are treated to a few suitably tense sequences when Petit’s crew set up the wire against the clock and the law. Yes, as I have already mentioned, the stunt itself is a visual marvel when experienced in 3D. But these scenes, which total to about 40 minutes, are the only worthwhile parts of the film. I dare say that I would have had a better time if The Walk was just a 3D IMAX short film, focusing solely on the event itself. But Zemeckis’s insistence on bloating the narrative in tedious places makes the experience, as a whole, something of a drag.

Much like the high-wire walk itself, this movie feels more like a stunt than anything else. It is a showcase for Zemeckis’s best and worst tendencies. Visual effects: Superb. Storytelling: Somewhat wanting. As they often say, there is a fine line between genius and madness. Philippe Petit walked precariously along this line. The Walk doesn’t even try to emulate his spirit.