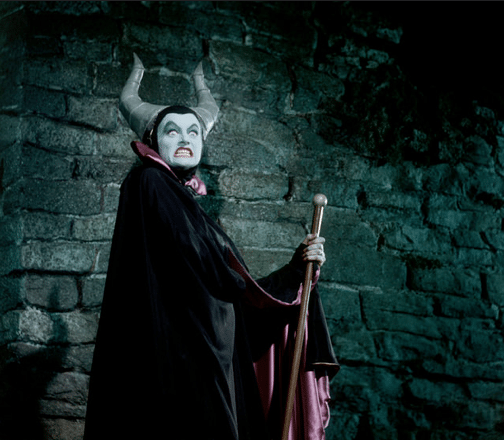 There is no denying it—Angelina Jolie’s cheek bone game was on point throughout the whole of the 2014 film release of Maleficent. With her ghostly pale complexion, her oxblood lips, and her sassy purple cape, nobody could look quite so stylish whilst being a… well… maleficent villain. The most fearsome feature of her entire look is her glistening set of teeth, almost blinding her victims as she cackles her menacing laugh.

Although not the epitome of glamour in his prison uniform, The Joker’s usual attire of an eccentric purple suit and faded green locks definitely has flare. His gruesome make up could easily be recreated for any Hallowe’en villain look—simply grab yourself a paint palette that includes white, red, and black. When drawing on your elongated smile, make sure to fashion yourself a few fake scars. He wouldn’t be The Joker without cracking a funny or two about how he got his creepy smile.

This crazy woman is an absolute style icon for every villain everywhere. I mean, just look at her! Literally wearing her victims in the form of a fur coat, evil resides in her bones. She takes monochrome to another level, travelling all the way up to her hairdo. Although her look is both sleek and fierce, I can’t help but think about how much upkeep her ‘do’ must need…

This is a handy costume idea for Hallowe’en if you were one of the hundreds of students to show up to last month’s Pangaea as Captain Hook. Sporting a dazzling red suit and a pair of knee-length black boots, he certainly fits into the category of ‘best dressed villain’. Appearing to be a proper member of society in old-fashioned formal attire (despite the obvious flaw of his hook-hand), it is his twisted moustache that gives away his evil machinations.

Although not technically a villain, the eerie feeling surrounding all Tim Burton productions feels pretty villainous to me. What better way to spend Hallowe’en than painted blue from head to toe, wearing a torn, dirty wedding dress? It even gives you an excuse to apply your favourite vampy lipstick! Get your boyfriend/best guy friend involved by dressing him as Johnny Depp’s character, Victor Van Dort, and pass by all of the green-eyed monsters wishing they were you—the most stylish couple in the room.