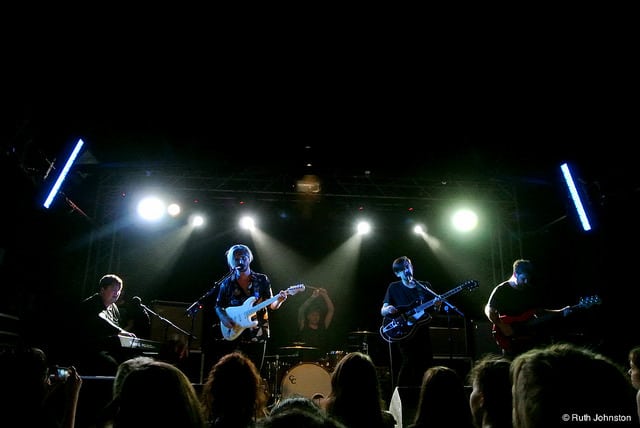 Interview: Eliza And The Bear

“Capturing what we do live in a studio album, whilst getting told ‘you’re so much better live than you are on CD’; that’s been the biggest challenge.” Martin Dukelow, lead guitarist of Eliza and the Bear, reflects on their lack of studio material despite having been together for four years now. “We’re a live band, 100 per cent.”

This is no defeated admission; as I talk to Martin and singer James Kellegher ahead of their Manchester Academy show, it is clear that they’re confident in their abilities and want to get their debut right. This confidence is far from unfounded, with the likes of Imagine Dragons and Paramore inviting them to be support acts on recent tours.

Their sound on previously-released singles sits somewhere between The 1975 and Of Monsters And Men, but new live songs ‘Oxygen’ and ‘Cruel’ showcase a more rebellious edge. “We are kind of going a bit rockier,” James says hesitantly, after having shut down the suggestion of a more electronic direction, given their new single ‘Make It On My Own’, which he calls “a black sheep.” I too was sceptical of this transition before the show, but they pulled it off in a way reminiscent of a soft-core Biffy Clyro, with added brass.

Their chemistry on stage is extremely infectious and it’s clear from the way in which they interact that it carries off-stage too. “We come as friends before band members and that really helps,” says James.

“It always feels like we’ve hit our peak and then we just step up again,” Martin talks of the “lovely” song-writing period they’ve been having, “we got about 15/16 songs down, sort of the opposite of writer’s block, sort of writer’s unblock?” he laughs.

Despite this cohesion, their creative approaches are startlingly different. James describes “a little black book,” for “moments of inspiration.” Martin states simply, “I’m not artistic. I won’t see a painting and be inspired to play a certain chord, for me, it’s about what I’m hearing.”

Contrast is a continuing theme within the band, with Martin replying that he’s “big on Slayer” when asked about musical taste and James chirping in that he’s “into Taylor Swift!” You can hear this disparity in their music, with Martin’s high gain, fiddly guitar riffs and James’s pop vocals conflating to create a unique sound. “It’s a push and a pull,” James admits, “but there’s a communal area where we coexist!”

When asked what the future holds for them, Martin responds with, “although I really love doing what we do best, I’m really looking forward to going back to the studio, finishing off some of the tracks and seeing what comes next.” If they do manage to nail this live sound on record, and infuse it with their grounded, yet exciting, sureness of themselves, it’s hard to imagine things not going their way.