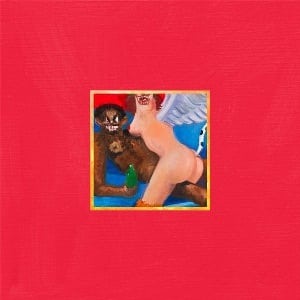 On seeing that last week’s record reappraisal was Radiohead’s Amnesiac, I pressed the head-ed as to why it wasn’t Kid A, as it’s clearly superior. Quite rightly, he responded that such a review would be redundant; countless critics have talked the album into journalistic sludge and there’s simply nothing left to say.

The same could be said of Kanye West’s My Beautiful Dark Twisted Fantasy. Putting aside the fact that it’s only five years old and so a reappraisal seems a little premature, it’s probably the most acclaimed album of the decade so far, garnering top marks from a ridiculous amount of music publications (seriously, look on Metacritic—I don’t think even The Beatles were treated that well).

So what’s left to say? Well this week we’re talking prog and aside from dusting off my old Rush albums, I couldn’t keep my mind off of Kanye. Is My Beautiful Dark… a prog rock album? I think that would be stating the case a little too strongly, but it is his prog rock album.

Let’s address the elephant in the room. ‘Power’ samples King Crimson. It’s a prog classic, but if this were the extent of the comparison, I’d be just as entitled to call To Pimp A Butterfly an indie-folk record because it samples Sufjan Stevens. Even out of prog rock context this fact is talked over to death and I’m not quite sure why. Sure it’s a bold move, but he’d sampled Curtis Mayfield and Daft Punk prior to this; I’d say that’s bolder.

Kanye doesn’t give good taste and respect for musical history the time of day, he’s Kanye fucking West damn it, he’ll do what he wants. This is precisely the reason, contrary to the opinion of many a critic, that I think the sample is so perfect. On this album, Kanye fully embraces the persona of the 21st century schizoid man: Erratic, indulgent of modern pleasures, a force of pure ego.

Prog is an intrinsically egotistical genre. It indulges in lengthy solos, high concepts, and pulls from a variety of styles for the primary purpose of showing off. My Beautiful Dark… is certainly a diverse album; ‘Devil In A New Dress’ is smooth as caramel soul, and ‘Hell Of A Life’ shuffles along with the clip, clop noises of an old western soundtrack.

Many elements of the instrumentation are shared with prog itself, such as the symphonic horns on ‘All Of The Lights’ and with swirling, screaming guitars scattered all over tracks like ‘Power’ and ‘Gorgeous’. In terms of solos, the nine-minute centrepiece ‘Runaway’ ends with what I can only describe as an autotune jam. This thick, distorted drone has become somewhat of a trademark of his, but on first listen it took me totally by surprise. It serves as a brilliant FU to anyone who’s criticised his singing abilities or professes that use of auto tune cannot be artful: an absolute highlight of his career.

It’s impossible to talk about prog without acknowledging the backlash of punk and appropriately, Kanye created his own. Perhaps disillusioned by excess and grand orchestration, Kanye’s followup Yeezus is stripped back, visceral and angry. Compare the “I, I, I” of ‘Runaway’ to the ‘yous’ in spat out in ‘New Slaves’ and you have the punk/prog conflict in a nut shell.

One of the virtues of a re-appraisal is the ability to step back from the hype of the time. Is My Beautiful Dark Twisted Fantasy overrated? Well it’s certainly not perfect. I can never tell if I’m missing something when listening to ‘So Appalled’ or if it really is just as vacuous and self-serving as it seems on the surface. The misogyny smeared over ‘Blame Game’ ruins an otherwise beautiful and fantastically produced song. However, picking flaws is like passing up an enormous cream cake because of the calories: The pure hedonism draws me in every time. It’s the most grand hip-hop record ever made and is unlikely to be matched, because only one man has the perfect balance of talent and ego to pull it off.