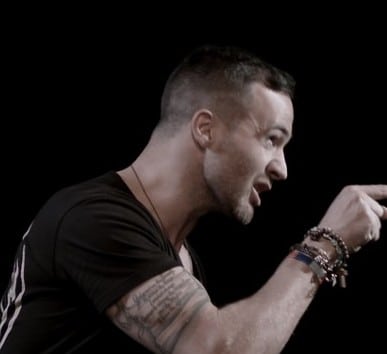 Castlefield Gallery’s latest offering is a multi-video installation by artist Melanie Manchot called Twelve. She worked for six months with recovering addicts and taught them the basics of film-making. They then used these newly-developed skills to write, direct and star in short films about their dark moments. All of the troubled memories are deeply personal, and the artists attempt to purge the past by developing their inner auteur.

The installation was originally commissioned by Mark Prest’s Portraits of Recovery arts charity. It works with recovery centres across the country and uses art to help with the difficult recovery period. Their previous projects include I AM, a two-year partnership with cultural organisations that produced similar film portraiture, for example Cristina Nuñez’s slow-mo series of former drug/alcohol abusers expressing themselves without words, just faces of pain. The most recent one, ADDICT (2015), which resulted in Manchot’s videos, also involved letter writing and performance.

On the first floor, two screens talk over each other as a young scouser describes the temporary abandon of drink. Drink allowed him to dream and gave a brief, realistic cast to his hopes of being the next Steven Gerard. Descending into the lower gallery, the same man then features in a monologue that flicks between two personalities: One guise is a polite man asking for his football back in the park, and the other is a noxious addict who fires back foul-mouthed replies and hoards the ball. One story is a ‘romance’ between a woman and her booze. It begins with a precocious meeting on boxing day 1974. But teen romance ends badly when the ruinous dependency upon drink forces them apart for the better.

Manchot’s work is part of a wider expressionist movement in recovery circles. In 2011, a forthright manifesto, the ‘Recoverist Manifesto,’ was released, and declared—in confessional free verse—the need to move away from silent suffering into speaking out and sharing experiences. This is why Manchot has chosen video as her art form. Auteurish flair and honest storytelling can be broadcast to other recoverists up and down the UK. Especially given the fact that the exhibition is touring and always involves discussion groups about the restorative effects of art-making on former addicts. The quality of the shorts is very good and, apart from anything else, makes a fascinating case for having a full-scale Recoverist Film Festival.