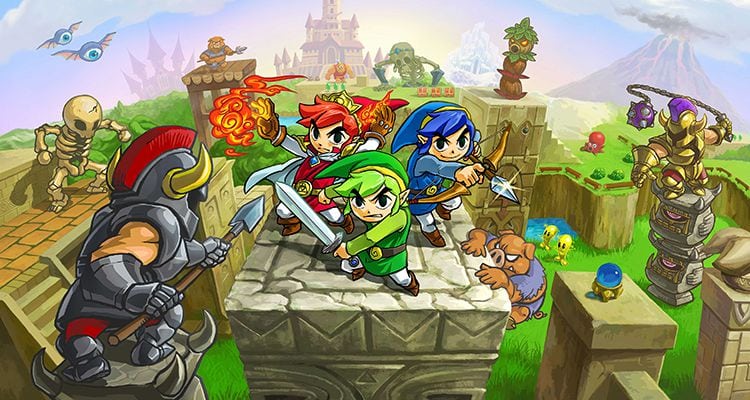 In 2014, the Legend of Zelda for Wii U was revealed to the public. The game looked stunning, and was promised with a 2015 release date. Unfortunately, at the beginning of this year, Mr Aonuma revealed that the game would be delayed until an undetermined date to ensure that it is perfect. This left a large, Zelda-shaped hole in many gamer hearts; however, at E3 2015, Nintendo announced a brand new Zelda game, for the 3DS instead of Wii U, that would be focused on three-player online multiplayer. Instantly, the game looked to reflect the previous multiplayer Zelda games: the Four Swords series for Game Boy Advance and GameCube. While it is no big budget Zelda, it is certainly not a bad title.

The most important part of Triforce Heroes is the multiplayer, and it appears in both online and local format. It even supports download play. Although you cannot mix and match the local and download multiplayer, you can take local friends online if you do not have three players. You have to have three players to use this game on multiplayer. The game does not support just two players, which feels a bit like a step backwards, since the Four Swords games could support one to four players. I do understand why this limitation is here, but I feel like there may have been a way to work around this if you only had two players but did or could not play online.

The local and download multiplayer is really, really fun. Playing this game with 2 other friends and making your way through the 32 puzzles is incredibly amusing. Through the power of co-ordination, you can easily solve the puzzles in your way and guard each other’s backs. This is where the game has all its fun, and I was lucky enough to have at least two friends with whom I could play the game. Like with all online multiplayer games, playing online can sometimes be a blessing or a curse. Depending on the competence of whom you play with, the game can either be a breeze or a frustrating hassle. Thanks to the benefits of being local, you can easily communicate what to do to your friends, but the lack of voice chat in the game limits this. Communication is not outright removed thanks to the inclusions of emotion icons on the bottom screen. This is a very Nintendo way of dealing with voice acting, and I cannot deny how amusing and fun it can be to use these icons. Cheering your friends on, or congratulating them, using the appropriate icons, can easily put a smile on any player’s face.

If you worry about not having friends to play with, as well as not being able to go online, then worry no longer, because Nintendo also included a single-player mode where you take control of Link and two clay ‘doppels’ that you can jump between. Unfortunately, this mode is not that amazing. It is certainly doable for the simpler missions, but the game was clearly not designed with single-player in mind. At times it is fine and at times it can be really frustrating. Controlling all three Links is always tedious. Using the totem ability, where the Links carry each other, can cut down on travel time somewhat; however, the puzzles that require the use of the Links working together are more hassle than they are worth, really. The single player is doable, but I would not recommend it for the whole play-time unless you are a veteran of the Zelda series. Then you might just make it.

The story of Triforce Heroes is nothing to write home about. The princess of Hytopia, Styla, has been cursed to be unfashionable, and so the king asks Link to enter the Drablands and defeat the witch in order to remove the curse. The big theme of Hytopia is fashion. It is a very fashionable kingdom and this is reflected in a new mechanic that allows the player to dress Link in various outfits. You can make these outfits by obtaining materials in the Drablands, although this can get a little tedious. At the end of every stage, you get a choice of three chests. Each chest has a material in it, but you can only take one and have no way of knowing what is in each chest. This means that if you do a whole level for a certain material and you pick the wrong box, then you have to do the whole level again to have another go. This can be very annoying at points, but because it is designed to be fair to all three players, I know why this issue is here. The outfits are a very nice addition to this game and dressing Link in all the outfits helps to make your Link feel unique. The outfits can vary from giving you more lives, improving your ability with certain items, to adding certain stage effects like swimming in lava and not sinking in quicksand. The mechanic works very well and it would be nice to see it come back in a future Zelda title.

Overall, Triforce Heroes was a very fun game to play with my friends and I had a blast online as well.  It is certainly not the best Zelda game ever made but it is not the worst. It tries to take the Zelda series in a slightly different direction and I can appreciate that. I just wish that some of the areas of the game, such as the single player mode, were more fleshed-out than they currently are. The gameplay itself is solid, but outside of the costumes and totem mechanic, it is nothing that we have not seen in previous Zelda titles (especially A Link Between Worlds, on the 3DS, which shares many features with this game). If you are looking for a fun multiplayer title this holiday season, then Triforce Heroes will have you cheering alongside your friends on a fashion-filled adventure.