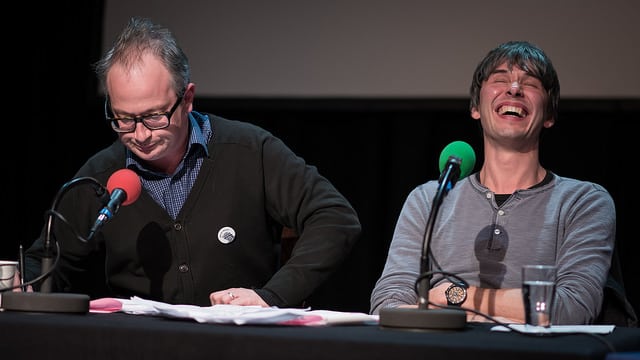 Manchester Science Festival Explores the Funny Side of Dark Matter

An episode of BBC Radio Four’s The Infinite Monkey Cage was recorded at the Manchester Museum of Science and Industry last week as part of the Manchester Science Festival.

In the hour long show, Professor Brian Cox and comedian Robin Ince were joined by University of Manchester Professors Tim O’Brien and Sarah Bridle, along with comedian Jon Culshaw, to tackle the question “what kind of shovel would we need to dig into dark matter?”

“We only know what five per cent of the universe is made of,” O’Brien explains. “The search for the missing 95 per cent—the dark matter and the mysterious dark energy—is definitely one of the most important topics in modern astrophysics.”

O’Brien works alongside Sarah Bridle at the University of Manchester’s Jodrell Bank Observatory in Macclesfield. Researchers at the centre, O’Brien explains, work on a huge range of projects “from understanding the Sun to the origins of the Universe.”

These types of topics are incredibly complex, and the programme tackles them with a unique approach: Humour.

Dark matter is an especially complex topic to grasp as it is both unknown and invisible. If you have a box of dark energy in a box and expand it, Bridle describes to the audience, you will end up with more dark energy then when you began.

Discussing the topic at hand, Ince jokes, “will take about five minutes because it turns out scientists haven’t got very far.

“Some solution would be great,” he continues, “that’s what I think we should put above the door of every laboratory.” This statement was followed by a “Cox off” in which all of the panel members took turns impersonating their fellow panel member.

References to Henry VIII, speculation over the existence of ghosts, and Carl Sagan impressions were all interspersed throughout the one hour show.  Using humour such as this is key to attracting listeners and developing interest in complex scientific questions.

“Science is part of our culture,” O’Brien tells The Mancunion, “just as much as reading a book, going to the cinema or theatre, or listening to a great piece of music—it should be discussed widely.”

“There was a good mix of information and some light-hearted banter,” said Vicky Rosin, the programme director for the European City of Science Open Forum. “I have to confess that I didn’t understand it all!

“Although researchers are well-trained in research methodology and tools, they often do not receive the training to communicate their findings in terms that non specialists can understand. This is why events like these are helpful; they decrease the barriers to science and provide a fun and interactive platform where people can get excited and inform themselves about the day-to-day implications of science.”

The Infinite Monkey Cage will continue recording this autumn in the United States.