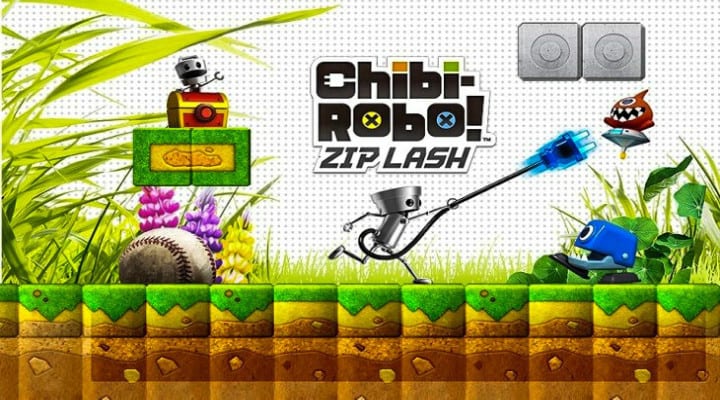 Nintendo’s holiday line-up for 2015 is more than a little lacklustre, to say the least. While Xenoblade Chronicles X and Mario & Luigi Paper Jam appear to be shaping up very well as must have titles for this Christmas, the rest of Nintendo’s November/December line up is a bit sub-par.

You have a Mario Sports title that looks and feels a bit empty in its current state, and a game designed specifically to sell Nintendo’s new money-maker, Amiibo. But among all the big names of Mario and Animal Crossing comes one of Nintendo’s more obscure IP: Chibi-Robo. Chibi-Robo! Zip Lash for Nintendo 3DS is the fifth game in the Chibi-Robo franchise but you would be forgiven for not knowing that. Only three of these games have ever graced our shores and along with this one, only the first title saw a proper retail release at the very end of the GameCube’s life-cycle.

The biggest complaint I heard about Chibi-Robo! Zip Lash was its ‘drastic’ change in genre. The previous titles were 3D adventure/platformers, but for the latest game in the franchise, the genre jumped dimensions into the 2D platformer genre. This was most likely done because Nintendo is all about 2D platformers and they sell, so they were hoping to finally make Chibi-Robo a bestseller.

As a 2D platfomer, Chibi-Robo has all the basic moves you would come to expect. You can run, jump, crouch and roll. Unlike the Super Mario series where jumping is Mario’s major way of attacking, jumping on enemies in Zip Lash only stuns them and allows you to jump higher. Instead, to defeat your opponents you must use Chibi-Robo’s special gimmick: the Zip Lash.

The idea of the Zip Lash is a new idea for Nintendo but not for gaming in general. Fans of Capcom’s Bionic Commando series may notice a lot of similarities between those games and this one. The Zip Lash is used for near enough everything in this game and its versatility is very high. The Zip Lash has the ability to attack enemies, destroy blocks, bounce off walls, tether onto orange surfaces (which Chibi-Robo can then pull himself over to, or use to swing across gaps), control vehicles, pull objects with blue surfaces towards him, open chests to get money and snacks, and grab collectibles like coins that are out of reach. The Zip Lash mechanic is used a lot, so Nintendo needed to make sure that it worked perfectly, and thankfully they did. The Zip Lash is easy to use, and the option of using the d-pad makes aiming even more accurate.

Most platformers represent health either by a bar or just giving the player a set number of hits before they die. Chibi-Robo instead uses a number scroller which represents Chibi-Robo’s power. Chibi-Robo actually runs on batteries and so every so often he needs to use his Chibi-plug in order to connect to a socket and restore all his strength. These sockets can be found through-out the level, often placed around check-points. This unique health bar also doubles over as a timer meaning Chibi-Robo’s health is always going down; however, despite this, I never felt any pressure.

The timer moves down so slowly and the plug sockets are so frequent that health was very rarely an issue. The one exception to this can be found in the vehicle levels which are by far the worst part about the game. Every world has at least one vehicle based level from a bunch of balloons to a skateboard to a submarine, and these range from OK to unbelievably frustrating. The two reasons for this are the constant draining of your power which now changes from a snail’s pace to a cheetahs forcing you to pick up power-orbs, which would be manageable if it was not for the second problem: that some of these vehicles are ridiculous to control. The balloons are the worst offender of this as they are painstakingly slow, not very well explained, and extremely inaccurate.

Another issue with this game is the level select which just feels dumb and unnecessary. Rather than letting players chose their levels, or even just move in chronological order, the game provides you with a carnival spinner filled with numbers from 1 – 3. Whichever number it stops decides how many spaces on the ‘world map’ you move and so this means you could easily skip over a level and have to go all the way back again, possibly repeating levels on the way.

I heard some people try and justify this spinner, saying it is not that hard to stop the spinner on the number you want, and while it is true that I only had issues with it a few times, I think that’s just the problem. I should not be having issues with just choosing the stage. The addition of a spinner feels completely unnecessary, like it was just added to make the game more original without thinking of the consequences, which is just poor game design.

A part of the game that has good game design are the two power-ups: Fire Chibi-Robo and ice Chibi-Robo. These temporary power-ups give Chibi-Robo the ability to melt objects, walk on lava, freeze water and destroy all enemies by touching. They work really well, naturally fitting in with the rest of the gameplay, and do not require the player to learn a new control-scheme like the vehicles do. Unfortunately, the power-ups are hardly used through-out the entire game, often appearing as one-off gimmicks for a stage which is a shame, as I feel the game would have been a lot better if there was more focus on these power-ups rather than the rubbish vehicles.

The plot and music was all fairly simple but also very forgettable. The also goes from the NPCs in the game which are more annoying/terrifying than charming. These NPCs ask Chibi-Robo to collect real world sweets, like Fruitella, in order to unlock costumes. This is fine except it also has problems in its implementation. You can only give 3 snacks to each toy per level, and the toys randomly jump from level to level so you will never know if you have the right snack they want when you meet them. This forces you to replay previous levels and feels more like padding.

Thankfully it is entirely optional. Another optional feature is the amiibo functionality which is surprisingly large for this game. By using nearly any amiibo you can unlock a Smash Bros style trophy of Chibi-Robo posing as the amiibo character, which is a nice feature, but to even unlock these trophies you need to use the Chibi-Robo amiibo to unlock the trophy lottery. It is through this lottery that you can also unlock a whole additional world which means there is some substantial, optional content trapped behind the amiibo.

Despite all these issues, I still enjoyed Chibi-Robo! Zip Lash, for the most part. I was still motivated to play through it but I am not sure if will ever go back in the future. It certainly made me curious to try the other games in the franchise and I hope one day that Nintendo re-releases it on the Nintendo eshop. If you are a big fan of platforming titles then you may get some enjoyment from Chibi-Robo as the game is not bad. However, if your not a huge platforming fanatic then Chibi-Robo! Zip Lash may bore you fairly quickly.