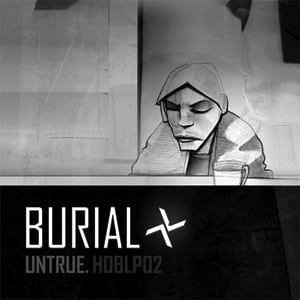 Somewhere on YouTube exists a rather ad hoc interview conducted by esteemed DJ Gilles Peterson—and featuring an uncharacteristically cheerful Thom Yorke—in which Flying Lotus claims that Burial’s Untrue only really made sense when he went on “a road trip” around the UK. That it had been raining on his visit only endeared him more to the album. Truth be told, the only backdrop that feels appropriate for Untrue’s deeply affecting, haunting soundscapes would have to be a cold, grim day in south London, cast in grey skies at the same moment that the heavens have opened.

The beauty of Untrue lies in its undimmed, elegiac melancholy; this is an album that sounds like the wistful memories of an ageing clubber. There are muffled swells of UK garage and deep house flavours; warped vocal samples cribbed from 90s UK hardcore; the rattling thump of 2-step. The result is amorphous and nebulous, though strangely lucid. Stranger still is the warmth that emerges from the album’s ghostly ambient textures. The song titles are stark and unembellished (‘In McDonalds’, ‘Homeless’), visceral tunes told as matter-of-fact. Untrue sounds so authentically like dark winter nights in the SE postcode area that it spawned the short-lived pseudo-genre ‘night-bus’—the musical incarnation of the type of person who elects to sit at the very back of the top deck of any night bus, dressed silently in a hoodie with their headphones on, nodding incessantly.

Untrue’s mood belongs to a specific era of exciting British music: The early-noughties dubstep explosion, an era that evokes images of lo-fi Boiler Room-imitating sessions in someone’s basement listening to bass-heavy music amongst a dense cloud of cannabis smoke. Such a scene may never happen again—dubstep bore inextricable ties to the environments it was produced in, now rendered unrecognisable in the age of austerity and cancerous, homogenous gentrification. As ever, things got lost in translation when dubstep was belatedly embraced across the pond. The woefully unsubtle, commercialised American variant amplified the sub-bass showboating but lost its cutting-edge spirit. And yet, Burial remains thoroughly unique. Untrue wasn’t and isn’t like other dubstep landmarks: Not nearly as deceptively abrasive as Benga’s Diary of an Afro Warrior, less spartan than DMZ’s output. In fact, it still sounds winningly alien, by turns mysterious (‘Ghost Hardware’, the loping stride of ‘Etched Headplate’) and desperately moving (‘Shell of Light’). An astonishing masterpiece.