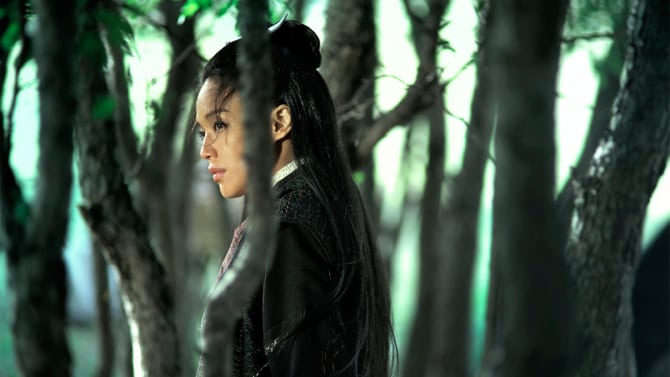 HOME Pick of the Week: The Assassin

The winner of last year’s Best Director award at Cannes, Hou Hsiao-hsien’s The Assassin is unmistakably an art-house lover’s wuxia movie. Fans of the more action-packed variety of Chinese martial arts films such as Ang Lee’s Crouching Tiger, Hidden Dragon, and Zhang Yimou’s Hero might feel let down by Hsiao-hsien’s deliberate and slow-burning approach to the narrative. Nonetheless, what the Taiwanese auteur delivers is, on its own terms, a masterful piece of cinema that stands as one of the finest achievements in visual poetry of the decade so far.

Set in 8th century China, the movie tells the story of the titular warrior (Shu Qi), who has been raised to be a deadly killer. We can see from the beginning that she is a master of the sword, second to none in martial prowess. But after an unwanted display of mercy, she is sent on a mission to kill the military governor of Weibo: A man whom she had been intended to marry, long ago.

No overstatement could possibly be made about the intense beauty of The Assassin. With both the black-and-white and colour cinematography at work in different stages of the film, every viewer is treated to a lavish and masterful exercise in visual storytelling. From the relatively still dialogue scenes to the flurries of violence throughout the picture, Hsiao-hsien delivers an awe-inspiring feat of cinema. Every frame is layered with meaning, drawing us in to a spectacle that is executed with a level of precision and skill to match our Assassin.

Many viewers might be put off the movie by what will undoubtedly be perceived as its agonisingly slow narrative and sparse scattering of action, but it is precisely this deliberate pace that makes The Assassin work so well. Hsiao-hsien hypnotises us with an understated story that finds exactly the right levels of intensity and heightened reality that the narrative demands. The director taps into the mind of our protagonist in her every movement and subtle emotion, and we cannot help but be captives to her tale. Unlike an alarmingly large number of filmmakers today, Hsiao-hsien appreciates the value of subtlety.

Repeated viewing will be essential to fully appreciate a film so nuanced and finely-wrought as The Assassin. The work of a true auteur, Hsiao-hsien succeeds in taking the familiar sights and sounds of the wuxia genre and crafting a martial arts picture worthy of the label of a masterpiece. No true lover of cinema should miss it.