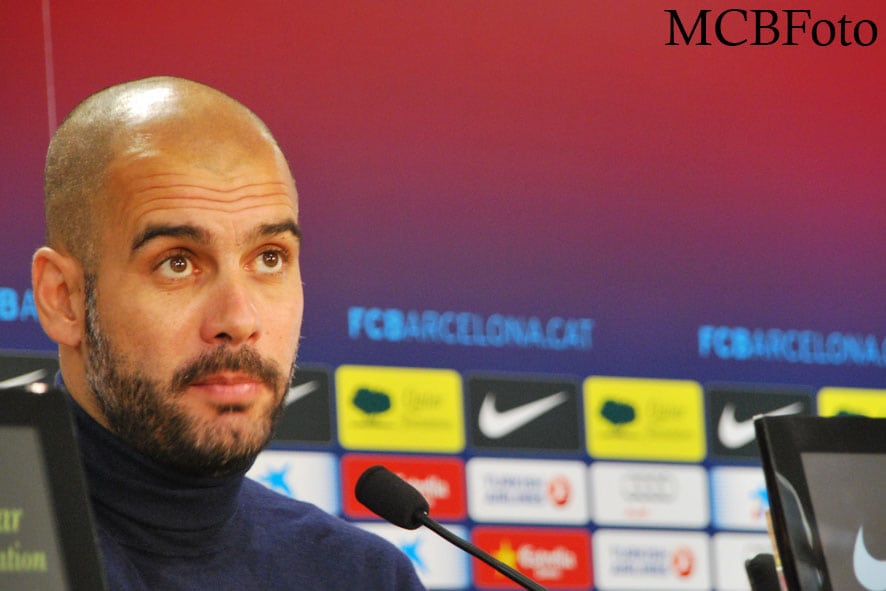 Manchester City’s Deadline Day announcement that Pep Guardiola will take over from Manuel Pellegrini as manager from next season is one that will whet the appetite of all Sky Blues supporters.

The most sought-after coach in world football arrives on the back of trophy-laden spells in charge at FC Barcelona and Bayern Munich, which have swollen the respective reputations of all parties. Both clubs have had a signature style of play that was the key ingredient of their success under the Spaniard.

His Barcelona swept aside all challengers with their tiki-taka system, leading them to become one of the most distinctive and successful teams in football history. They made use of short passing, domination of possession, and a tremendous amount of patience as they probed opposition defences until resistance proved futile and the scoreboard began to tick up higher and higher. The ball was passed around until the other side could simply no longer keep up.

Bayern Munich under Guardiola are a different tactical beast, making use of relentless stamina and pace to bully their way through defences. The possession-based game remains, but Bayern are a side that attacks less patiently than Barcelona, using quicker passing to move up the field and release attackers. While Lionel Messi often played up front as a ‘false nine’ at Barça, Robert Lewandowski has provided a more physical fulcrum for his attack in the Bundesliga.

Guardiola has given both sides distinct tactical identities, suggesting a level of pragmatism in his approach that has allowed the two sides to flourish in their respective leagues.

This leaves question marks as to how his Manchester City team will operate. The differences between his previous stomping grounds and the Premier League make it difficult to directly copy either system, and City have an ageing squad, which could require significant overhaul in order to play in a radically different shape and style.

Sky Sports have had their own attempts at predicting City’s XI under Guardiola for next season, seeking the guidance of footballing soothsayers Tony Cascarino and Steve Howey.

The pair have created the kind of sides you would conjure up with your mates in the playground in year six, discussing your world football XI. Perhaps Cascarino and Howey have completely given up on any notion of sporting realism, and base their football transfer knowhow on FIFA 16 career mode and Match Magazine.

It is left to The Mancunion, therefore, to consider the make-up of The Citizens in 2016/17.

Guardiola’s father Valenti told BBC Sport about the style of play City supporters can expect upon his son’s arrival: “He will look to carry on the football of his Barcelona and Bayern teams. He has this attitude to football; not just to win, but to win in a distinctive way.”

It is a fair assumption, then, that a Barça-Bayern hybrid coming to the Etihad is a distinct possibility. The English game’s speed will restrict the amount of possession a Guardiola side will have in comparison to Spain’s La Liga, and his defence will no doubt have more to worry about than that of his all-conquering Barcelona team. In contrast to Bayern, City will be competing in an extremely competitive division, as well as on domestic cup and European fronts, meaning that the Spaniard will need to create a dynamic side with a few versatile players.

In terms of personnel, with the combination of a new manager, more Premier League TV money, and fresh investment from China, it is a safe assumption that City will spend vast swathes of Sheikh Mansour’s oil cash once again in the summer. Here’s a look at how they might kick things off in August:

His reputation as one of the Premier League’s most reliable goalkeepers means that Joe Hart will remain untroubled. His lack of dandruff will also surely stand him in good stead.

Guardiola’s full-backs traditionally provide width in attacking areas, and are not tasked with too much defensive work. City’s current full-backs, Aleksandar Kolarov and Bacary Sagna are perfectly adequate, but are not of the same quality as the likes of David Alaba and Dani Alves. Sagna’s recent form and experience might save him for the time being, but Kolarov’s inconsistency could see him reach the end of the line. Wolfsburg’s Swiss player Ricardo Rodriguez will be known to Guardiola and could provide a better alternative.

Centre-backs will need to be confident on the ball. Pep’s penchant for picking midfield players at centre-half is a staple that has continued from Barca, where Javier Mascherano transformed and made the position his own, to Bayern, who have sporadically employed both Javi Martínez and Xabi Alonso in central defence. City’s Eliaquim Mangala has the elegance and composure of a man going ice-skating on a first date, and will need to be replaced. Athletic Bilbao’s young French defender Aymeric Laporte has quality and youth on his side, and could be the man to partner captain Vincent Kompany.

In midfield, Guardiola favours a holding player who breaks up play and rarely ventures forward, a position comfortably filled by Fernandinho. David Silva can act as the side’s Iniesta equivalent, orchestrating play from deep. Yaya Touré is likely to make way this summer as his importance to the side continues to diminish, and Sheikh Mansour could break the bank to bring in Juventus’ Paul Pogba as a replacement.

In attack City have one of the world’s great strikers in Sergio Agüero, and two players who cost a combined £100m in 2015 in Raheem Sterling and Kevin de Bruyne. There seems little need to alter such a tremendous triumvirate, unless Guardiola’s arrival could increase the miniscule chances of Lionel Messi leaving behind Barcelona and his troubles with the Spanish taxman in favour of a new challenge.

His detractors argue that Guardiola has only taken charge of clubs with whom it was arguably more difficult to lose the domestic league than win it, but he will come up against a more difficult challenge upon his arrival in England. He will face immense scrutiny from supporters and press alike as they watch him bark tactical instructions to his team (in one of those smart suits with his designer stubble… phwoar). Whatever style he brings to these shores, Manchester City will certainly be an intriguing watch next season.