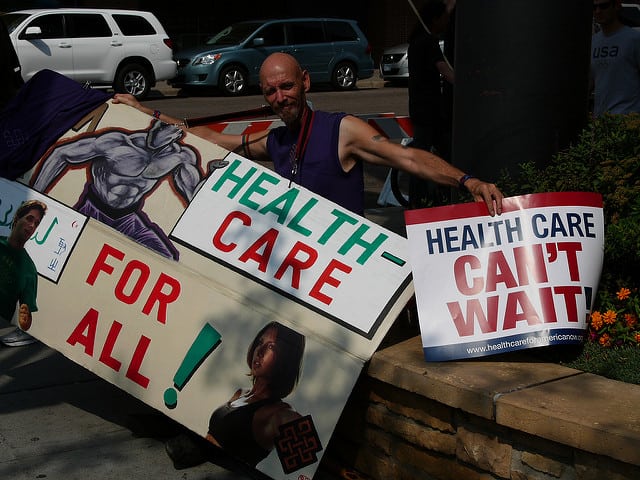 Is single-payer healthcare the answer for America?

The British often taunt Americans for not having free healthcare. And truthfully, many Americans are ashamed of not being part of the club—we hate being excluded. However, frustration at the US not having a single-payer healthcare system should be reconsidered. Instead, these ill-placed sentiments need to be directed at the unequal distribution of mixed benefits.

The percentage of GDP the United States spend on welfare is greater than in most advanced industrial economies. But the country spends less and taxes less on welfare in real terms because the systems of support that social programs rely on are a combination of government spending, tax-based subsidies, and private social spending.

When people criticize the US healthcare system for falling behind other developed countries’ welfare infrastructure, they are speaking of direct public spending. Take into consideration though that when countries deliver benefits to their people, the government taxes them as well, completely reducing the actual value of benefits. What critics should divert their attention to is net social expenditure. Developed by the Organization for Economic Cooperation and Development (OECD), it takes into account direct public spending, tax-based spending, private spending, and the taxes people pay in measuring a country’s social disbursements. Meaning that when Americans do get benefits, they get to keep most of them. In this context, the US ranks fifth in highest social spending, right after Sweden.

Net social expenditure is a better assessment because people are assisted by official means other than direct government aid. Because these means are still regulated by the government, it would fall under the national healthcare system. Though subsidies and tax breaks are not the same thing, economist David Friedman argues that, “they have the same effect on federal budget”, therefore they will be treated as interchangeable. The US government uses methods like tax exemptions for employer contributions to health insurance, and tax reimbursements for child care in order to take care of its people. But as countless news outlets have covered, wealth inequality is a problem in America. The fact that subsidies do the same work as direct spending programs in a country that ranks first in “tax breaks for social purposes” justifies the shift of focus to how private social benefits are presently distributing resources unequally.

Private spending in the United States is like a moderate, partly effective version of David Cameron’s “big society”. The government relies on voluntary employer-provided pensions and requires some employers to pay for sick leave. This covers health insurance, pensions, dependent care, tax exclusions, and other related items. Though it makes up almost 40 per cent of US social spending, coverage is secured for some but not all. According to the US Bureau of Labor Statistics’ National Compensation Survey, the higher the average wage at a firm, the more likely they’ll offer health coverage, retirement, and life insurance. What happens then is that private social benefits are accumulating with the middle and upper income bracket. Because even with the existence of in-kind benefits (like Medicaid) that is provided free or at a reduced price, the disadvantaged are unable to reap indirect benefits; since major US tax breaks are usable only to those with enough resources to contribute to charity or take out a large mortgage.

There are more than (an already understated) $905 billion worth of tax breaks allowed under US tax code. Approximately $530 billion of that goes to corporations and tax codes benefitting the middle upper class. Even federal tax credits for higher education, targeted at lower incomes, mostly benefit middle and upper income households. With the exception of the Earned Income Tax Credit and the Child Tax Credit, tax benefits disproportionately help those who pay hefty income taxes. Because lower income citizens don’t have large liabilities—they are in effect left out of the system. Though about 96 per cent of Americans benefit from some type of government social program, the quality of that gained by the necessitous is significantly lower than the middle and upper echelons.

The Affordable Care Act, or Obamacare, is not a sustainable solution. The penurious are better off under the health reform, with the targeted groups of young, Black, and Hispanic being successfully covered. Unfortunately, numbers suggest that new options may be unappealing or out of reach for the middle class, causing their take up percentages to be lower. It is effectively fighting back inequality, but the results might be temporary. Proponents will cite the lower than expected costs of the program. But the reason that it’s true is because expected enrollments have fallen. So while 9 million Americans gained insurance coverage in 2015, the amount of healthy people (calculated through exchange enrollments) subsidizing the overall risk pool is not enough to keep insurance prices from rising.

Sweeping improvements are difficult to come into fruition, but it does not justify defaulting to a single-payer healthcare system. Bear in mind that additional tax revenue to fund this system would mean putting pressure on the middle class, not just the wealthy. If it were proposed, Americans would vote against it because many already have good coverage through their employers. It is, however, politically feasible to enact equalizing tax breaks that refund, instead of deduct below a certain income. Regulations mandating the private sector to provide a more thorough array of assistance to the population are urgently needed for the lower class, and can be improved on for a more robust middle class. The UK’s success in targeting impecunious households offsets the 14.5 per cent cash benefit of an average British household’s disposable income to the OECD average of 21.9 per cent. Compared to the US, where only 7 per cent of direct public spending goes to income considered programs. Being that there are few US policies that emphasise helping the disadvantaged, increasing social programs can be considered. But the main focus on targeting tax-based subsidies and private social spending should not be lost. It is unquestionable that the United States welfare state needs to be reformed, but there’s no reason for Americans to fall to the international peer pressure of having “free” healthcare.