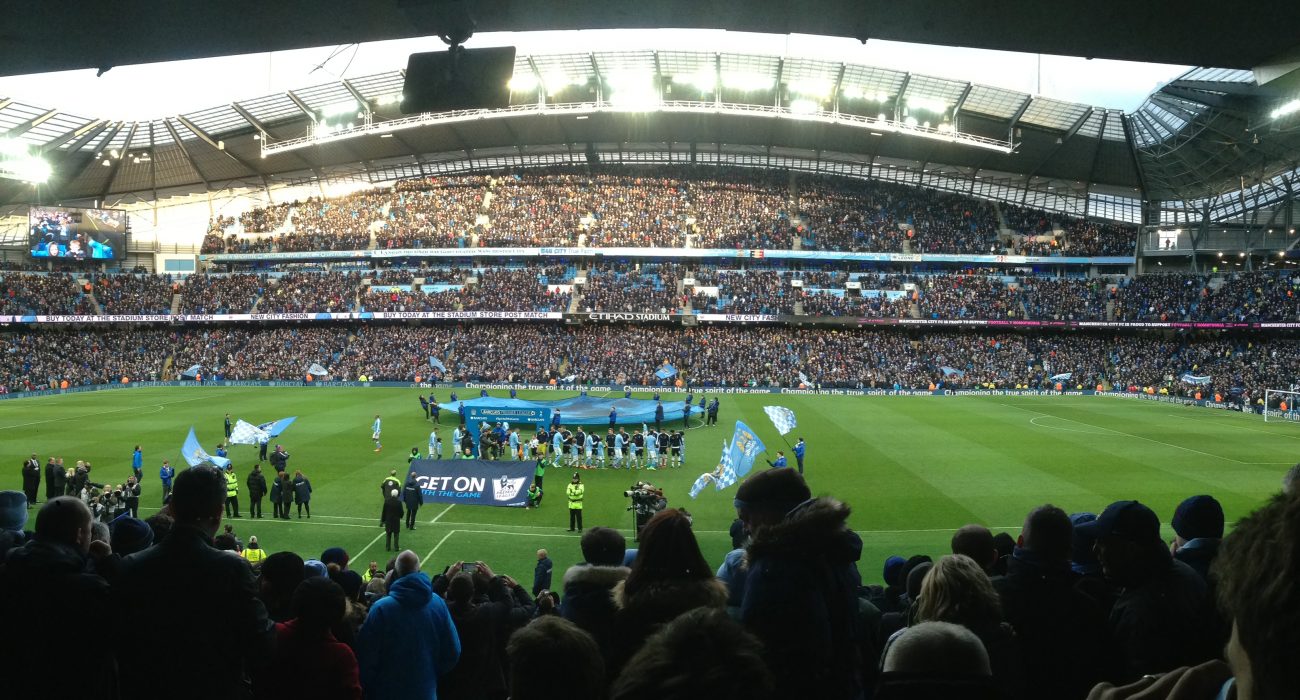 If this game was a song: All You Need is Love – The Beatles

If you’re a City fan sat at home now crying into your hands at a second loss in a row—do not despair. There’s time to resolve this issue at The Etihad, and now there’s a small break for the team to gather and come out fighting again when the Premier League resumes.

This is no day to be upset; Valentine’s Day is the day of love, and love is all you need! So get out of the chair that you are slumped in, and put on a Hugh Grant Film. This is the only day of the year where it is acceptable to watch Hugh Grant.

13th minute: Heung-Min Son has the ball in the back of the net for Spurs, but he was miles offside.

48th minute: the ball loops down into the area after a Yaya Touré shot deflects! It falls to Aguero, who has to take it first time from a great height… even he isn’t that good. The ball is still rising.

52nd minute: PENALTY. Rose crosses the ball at great speed and it hits Raheem Sterling. The ball seems to strike him on his back instead of his arm—and there will be argument as to whether he was in the area or not. Despite many replays, the decision is not 100% conclusive. Harry Kane puts away the penalty.

56th minute: Touré hits the bar from a curving free kick from around 25 yards.

73rd minute: GOAL. Eight minute after coming on, Iheanacho finds the back of the net from a Gaël Clichy cross.

83rd minute: GOAL. Three minutes after coming on, Lamella shows some fancy footwork and plays through Eriksen to put the ball past Hart. Despite cries of offside from the crowd, Eriksen is clearly onside.

90+3rd minute: Pinball in the Tottenham penalty area as City try to find an equaliser. Hugo Lloris flicks the ball off the top of Otamendi’s head to save Spurs, as David Silva’s follow up is high and mighty.

Kelechi Iheanacho, Steven Naismith, Olivier Giroud and Christian Benteke are the most successful substitutes in the Premier League this season with 3 goals each.

Success in the Capital

Although it would be far off the mark to label today as a title decider, it was definitely a day you wanted your team to come out on top! With Spurs and City meeting in Manchester, and Arsenal playing Leicester down in the capital, the top four were going head to head.

Arsenal beat the Midlands team 2-1 due to a last minute Danny Welbeck goal, hence opening up the league for Spurs and City to catch up to Leicester. The two North London sides came out on top in the end today, as Spurs matched Arsenal’s 2-1 score line, denting City’s hopes and the confidence of league-leaders Leicester.

Tottenham haven’t been sitting in this comfortable a position in decades, and this is the closest Arsenal have been to a genuine title surge in quite a while. Considering this, you could say The Smith’s prediction is right—there will be ‘panic on the streets of London’.

Spurs fans would have been overjoyed at the prospect of sitting in the top four at this stage in the season—so just imagine how they must be feeling now, with only Leicester City above them in the league table. Their combination of speed in attack, and discipline in defence is what is keeping them up and amongst the big boys this season. The accuracy on long balls from centre back Toby Alderweireld showcased Spurs’ unpredictable nature, as they switched play often during the match, dragging City from left to right.

City are expected to come back fighting, as they have a team that are so used to the title run-in! Players like Joe Hart, Pablo Zabaleta, Vincent Kompany, Yaya Toure, David Silva and Sergio Aguero have been here many times before and won this league twice already. It is with this that we must turn our attention to Spurs, as they have the youngest side in the league. This shows an awful lot of potential for Spurs’ future and highlights that they may be title contenders for years to come, but will also put a hint of worry in the stomach of fans as they are so inexperienced.

Manuel Pellegrini: “I think that we must continue fighting. We have to play another 36 points.”

Christian Eriksen had a fantastic 24th birthday today. He scored the winner that saw his side move up to second place in the Premier League, and the fans love him for it. The Tottenham fans held aloft a banner for Eriksen wishing him a happy birthday, and he returned the love by jumping in the crowd when he scored the winner to celebrate with them!

Manuel Pellegrini was quick to stress in his post-match interview that Manchester City only have fourteen players available at the moment. This is highlighted by how young the bench was for the game against Tottenham. Bersant Celina, who made his Premier League debut last week against Leicester City, was joined by Kelechi Iheanacho, Aleix Garcia and Manu Garcia on the bench who are all teenagers. This will both excite and worry fans, but have no fear! The spine of the team are all back and now fit. Joe Hart, Vincent Kompany, Yaya Toure, David Silva and Sergio Aguero are all fit at the same time for the first time in what feels like a lifetime, and City always flourish with these five in the team. And, a flourish is exactly what they need right now.

Men of the Match

City fans may not thank me for this, as they spent half the match booing Rose. Midway through the second half, Rose didn’t put the ball out of play after his own player was down injured, despite how the City defenders were under the impression that he would. The fans didn’t take kindly to this, but it must not be forgotten what a good game the Englishman had. It was Rose’s cross that won Tottenham the penalty in the second half, after it hit Raheem Sterling. Despite how replays show that this probably hit Sterling on his back instead of his arm, it was a wicked cross to have to defend against. Rose was a constant threat all game, up against Pablo Zabaleta on the left wing, as he had him twisting and turning all match. A hint of Rose’s desire was displayed when he jumped out to a Sterling cross in the first half, chest first! The ball rocketed at his chest and the referee had to stop the game for a moment.

The sides were very evenly matched today, and no City player had a bad game. Raheem Sterling just edged it though in my opinion. Gaël Clichy and Vincent Kompany also had great games in a much more confident display from a City back four—despite the two goals that went past them. Sterling’s pace going forwards and ability to take on any defender is fantastic to watch, but the part of his game that was so surprising today was his defensive work-rate. Countless times Sterling was back defending and winning the ball back to start a counter-attack. Although this was in vain in the end, as City endured their second loss in a row, Sterling is showing what he’s made of and will definitely be off to the European Championships in the summer to showcase this to the world.

Does anybody want this?

It’s been an awfully long time since four teams have been in the running for the title this late in the season, as each week a different side slips up! This week it was City and Leicester—who knows who it will be next week! Nobody has any intentions of running away with the lead this season, and it will be left wide open for any team to win the coveted trophy. So go ahead and put a tenner on Aston Villa…