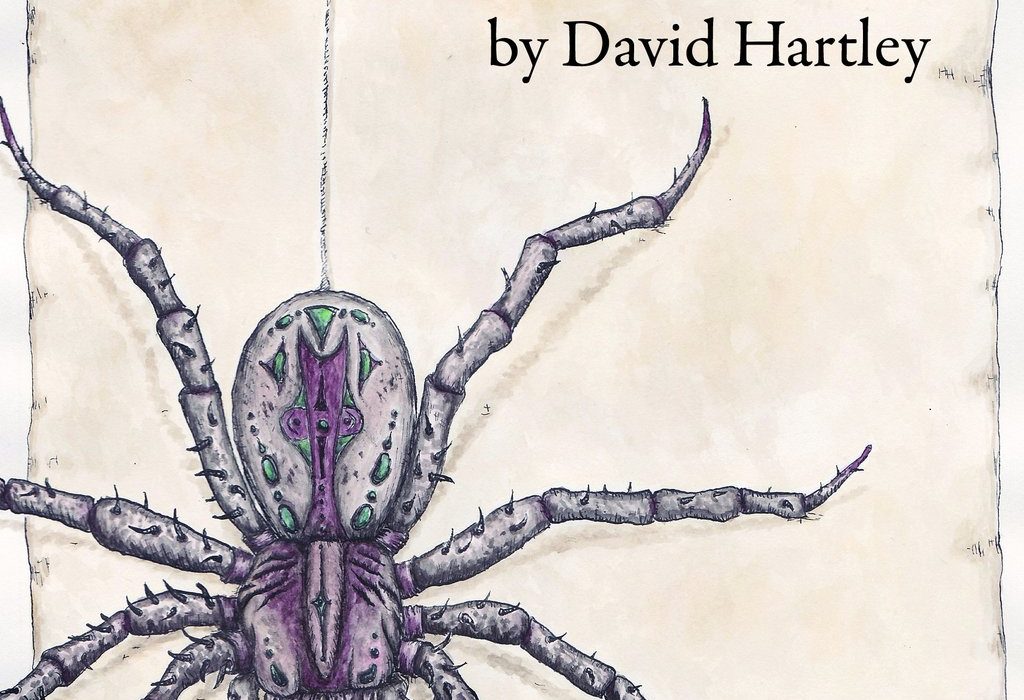 On Monday 1st of February, I interviewed David Hartley about his upcoming book of short stories, Spiderseed. I was familiar with some of his work, from going to some of his performances around Manchester and was excited to get an insight into his new project. According to David, Spiderseed is a collection of flash fiction with a “weird edge”, illustrated beautifully by Emily Ingle and published by Sleepy House Press. Knowing he had previously self-published, I was interested in what Sleepy House Press had added to the process this time. Hartley praised in particular, their additional editorial eye and fresh enthusiasm. He recounted one particularly amusing correction happened when the editors were reading a story about a Manta Ray had actually been about a Mantra Ray until that mistake had been spotted.

Next, I asked David about his decision in choosing to write flash fiction. A style of writing perhaps less often explored, I wondered how he had come across it and what about it attracted him. David Hartley noted that it seemed the best fit, especially in light of his experiment, upon leaving the University of Manchester in 2008, where he attempted to write a short story every week for a year. So being able to write something complete and in short periods of time would work best. Around this time, he also started attending spoken word events around Manchester, where an average of 5 minute sets meant being concise was important.

As someone who tries to perform at spoken word events regularly, I was interested in his opinion on how reading work out loud changes it, and how his work adapted between the spoken and the read. The most important thing to consider, Hartley noted, is that when you’re speaking to a crowd, maybe halfway through a night, maybe tired, maybe not listening, you have to hook them on the first line. I personally remember being hooked by one of his stories about a fox at a Hallowe’en reading. He also noted the importance of judging an audience.

Next, I wanted to know how he writes, maybe an age-old question, but it is one I think tells a great deal about a writer. Myself being a prolific bus stop writer, I wondered if he ever wrote in public. No, was the short answer, he prefers to write in his study surrounded by his books. And when I mentioned inspiration, Hartley described Adam Marek’s analogy of his brain being like a gambit machine, with the first wheel being formative memories, the second being ideas from places, and the third being what you’re looking at. And every time you try to write, the lever is pulled and sometimes the three wheels  line up perfectly to create something. I think this is a wonderful way of describing inspiration, but I was particularly interested in what kinds of images keep spinning on David’s gambit machine. Animals seem to appear frequently in Hartley’s stories—particularly in Spiderseed—in weird and wonderful ways. He attributed this perhaps to his time volunteering at Manchester’s RSPCA where he became increasingly bothered about the treatment of animals. He also suggested that he had more recently realised how often his childhood experience of growing up with his sister Jenny—who is autistic—and her unique view of the world, appeared in his writing one way or another. His story, Fly faces these experiences head on.

Lastly, I was interested in the role that Manchester and the university had played in his writing.Having studied film, English and drama at the University of Manchester 10 years ago, and choosing to stay for another seven years, Hartley noted that, during his time here, he didn’t venture much away from the Oxford Road Corridor. But when he decided he would be settling here after graduating, he began to explore the city. He realised the diversity and complexity of the city and the events going on around it. He met plenty of older writers and joined Manchester Speculative Fiction Group, who still meet often and perform at events such as Verbose at Fallow Café. The city has much to offer for writers of all kinds and is well worth exploring.

I very much appreciated David Hartley taking time out of his day to meet with me, and being so open and honest with his answers to my questioning. I really recommend both seeking out Spiderseed and his spoken word event in Stretford Sip Club, Speakeasy, the next event being on the 3rd of March, and the writer’s workshop beforehand.