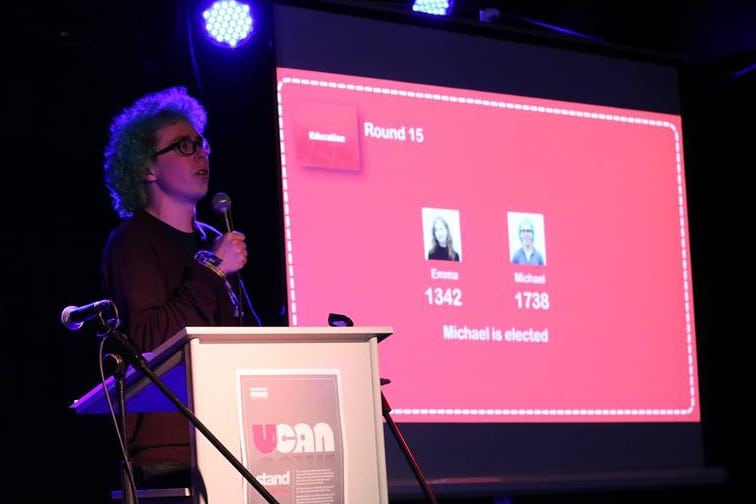 Michael on the evening of the 2016 Exec elections. Photo: The Mancunion

A new Education Secretary has started her tenure at the Students’ Union, following the sudden resignation of re-elected officer Michael Spence.

Michael Spence served as Education Officer at the University of Manchester Students’ Union from July 2015 and was re-elected in March with 1,738 votes.

He ran on a platform of continuing to fight against additional course costs and subject closures, campaigning for better course representation, and introducing ‘Education Surgeries’.

It was recently announced he would not continue in the position “after a period of reflection”.

Emma Atkins, who came second to Spence in March’s elections with 1,342 votes, was offered the position soon after. As the resignation came so late in the academic year, it was decided a by-election would be “impractical”, according to the Students’ Union.

Atkins, who ran under the slogan ‘Game of Loans’, promised more communication and information sharing between departments, workshops to learn life skills, and improving the value for money of education at Manchester.

“Emma has a clear mandate from our students to take up the role and will do so with the other officers from 1 July 2016”, said the Union in its official announcement.

“During his time at the Students’ Union, Michael has achieved great things in office. In a challenging year for Higher Education, he has played a key role locally and nationally in forming a response to the consultation of the Government’s recent Green Paper and the changes being proposed.

“Emma is due to graduate in German and Spanish and has been involved in a number of educational related activities with the Students’ Union including outreach work teaching English to parents of pupils in schools.

“The rest of the team are looking forward to working alongside Emma as they prepare to embark on the academic year ahead.”