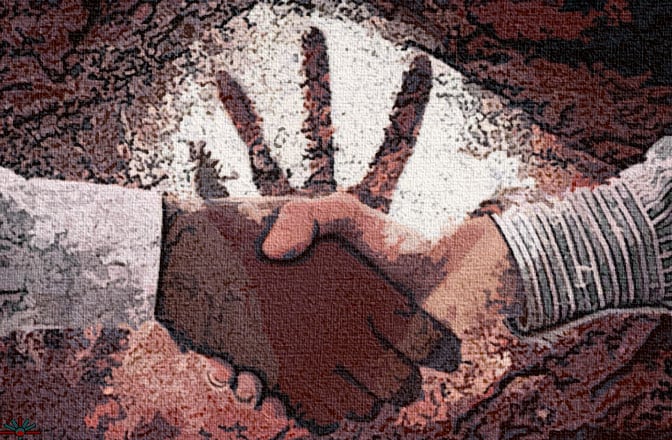 Is art the answer to racism?

Although the abolition of slavery in Britain was rendered successful in the early 19th century, minority ethnicities have never quite been able to break down the social constructs of our society. They have been the subject of continuous racism.

Take, for example, the shooting of Trayvon Martin back in 2012; a case which immediately sparked black people around America—and then the world—to take action against anti-black racism. The Black Lives Matter Network was thus formed.

Since then, we’ve seen a constant stream of crimes attracting the media which surround racial hate; including officer-involved shootings in the USA, many of which involved deaths of African Americans.

It’s not even just those from ethnic minorities that have been at the brunt of so-called “racial attacks”. The aftermath of the Brexit vote lead to the graffiti vandalism of a polish community centre in Hammersmith.

Racism is blatantly everywhere. The question is, though, how do we solve it?

Adrian Piper is a successful black artist born in New York. Her work addresses issues such as ostracism and racism. One of her most poignant pieces of work is her video installation “Cornered” (1988) where she declares to everyone “I’m black”. She proceeds with an argument culminating in the question ‘Should we accept the racist status quo or begin to live differently?’ It’s clever. It’s powerful. It pushes you into a corner and makes you pick a side.

It’s not just American artists that have got a hold on Black art either. The British Black Arts Movement was founded in 1982. It’s a political art movement that was inspired by anti-racism and feminism across the UK. It sought to raise awareness of the issues that surrounded (and which still surround) gender and race. The Other Story (1989) was the first retrospective exhibition of British African, Caribbean and Asian modernism. It was extremely successful in publicising ethnic barriers in the art establishment and continues to inspire many artists to this day.

More recently, however, there’s been a wave of contemporary artists whose art shows the position of a modern society inflicted by racial injustices. Their art has caused awe amongst all.

At the Venice Biennale in 2015, artist Adam Pendleton hung his large-scale installation of black and white paintings blazoned with the words “Black Lives Matter”.  He describes that “The political dynamic isn’t new. What’s new is the language that is at once a public mourning, a rallying cry and a poetic plea.”

Kerry James Marshall is one of the few black painters to permeate western art. His success is largely due to the fact that he only paints black figures. Born in Alabama, he uses different types of media to successfully comment on the history of black identity in the western world.

Art can’t change the world overnight. But it can make people talk and reflect upon how they feel. If people can start engaging with the new type of art we’re seeing, then maybe one day it will become more of just a visual representation. Maybe it will be a reality.

To help reach this, the education of minority art is something that artists are pushing to see happen. By promoting the history of black people, Mr Marshall hopes to create a future that will see black figures the norm on gallery walls.

British artist Sonia Boyce, MBE, is also seeking to turn this around with her AHRC-funded research project, Black Artists and Modernism. School curriculum’s still ignore minority artists and this has shown to have a significant effect on the amount of black and ethnic minority students accessing art in higher education. Boyce hopes to overthrow this with her aim to ensure that the Black story is “constantly embedded in teaching and thinking”.

Art will always be the best representation of time that we have. When future generations look back to the early 21st century, they will see the struggle and complexities of minority races still trying to breakdown the social constructs that invisibly, yet inevitably, exist.

Slavery may have been abolished close to 200 years ago, but that was only the start in a very long period that will hopefully see the equality of all races on earth. Art is the medium that binds the story together and is, seemingly, our only hope to prove that one day we will all matter.