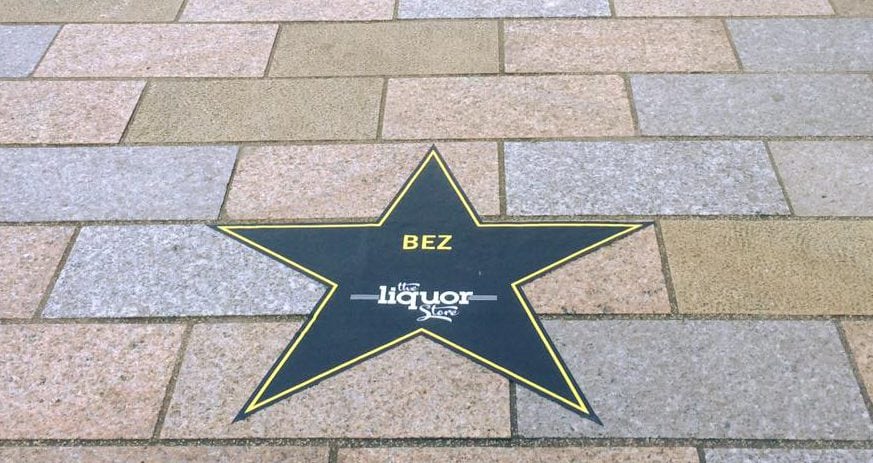 Manchester’s First Street has become home to 20 stars on the pavements, honouring some of the city’s most revered residents.

The city’s answer to the Hollywood Walk of Fame, ‘Star Walk Manchester’ is part of a promotional campaign ahead of the opening of new bar, ‘The Liquor Store First Street’, a sister business to the Deansgate establishment of the same name.

The 20 favourites featured in the installation were selected through a poll run by the bar’s management. The resulting top 20 represent the diversity of Manchester, from its heavily industrial past, to artists like L. S. Lowry, as well as more recent additions the city, such as the late comedian Caroline Aherne.

Liquor Store co-owner Doug Waldron commented on how honouring the creators of the city’s legacy was an important part of the Liquor Store’s expansion.

“Manchester is at the heart of everything we do at the Liquor Store and with First Street being an artistic breeding ground, located opposite the famous Hacienda building, it seemed fitting to open our new bar by celebrating some of the city’s most prolific stars.”

Demonstrating the breadth of Manchester’s contribution to the world, the icons represent a number of fields ranging from sport to the arts. Figures such as Paul Scholes of Manchester United, acclaimed actor Maxine Peake, and director Danny Boyle, the man behind the opening ceremony at the London 2012 Olympics, all being celebrated.

Manchester’s rich musical history is, naturally, represented especially strongly, with Ian Curtis, Morrissey, the Gallagher brothers, and iconic manager Tony Wilson all to be found in the project. The University of Manchester also maintains a strong presence, with the inclusion of poet Lemn Sissay, Chancellor of the University, and Physics fellow Brian Cox.

Emmeline Pankhurst, a pioneering figure of Britain’s suffragette movement, also appears in the installation, following the announcement in January that she will be honoured by a new statue located in Manchester, the city of her birth.

Unfortunately, Star Walk Manchester is not a permanent fixture. Manchester’s pedestrians will only be able to admire the installation until Monday 10th October, following the opening of the new branch of The Liquor Store on Saturday 8th October.

The full list of featured stars is as follows: