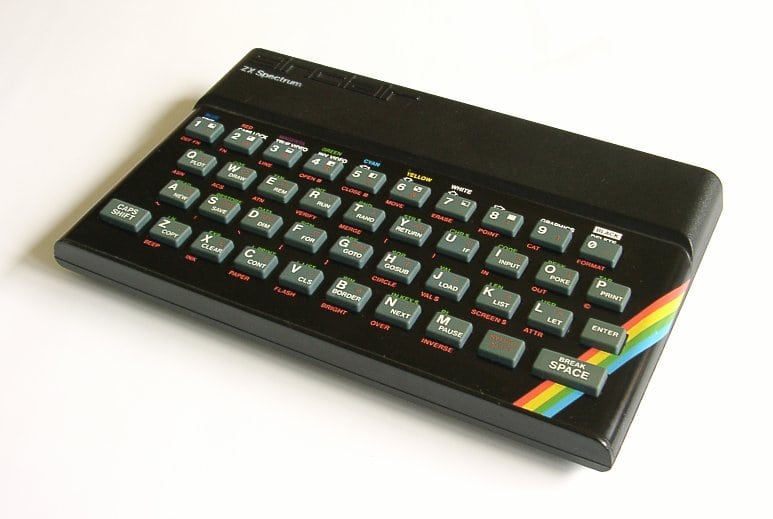 Here at the Mancunion, we try our best to keep on the pulse of new games and any news that comes from the world of gaming. I would like your permission, however, to step back for a bit and have a look back to what I would call the most interesting decade in gaming for the UK: the 1980’s.

While the US was lording over by the Atari 2600, the UK and most of Europe were getting involved in the home computer. Computers were no longer the size of the Manchester Baby and could start doing slightly more than number addition. Early prophets boldly predicted that every household in the country would someday own one and that computers and programming were the next big thing.

Home computers started becoming available in mail order “complete assembly required” kit form in the late 70’s, where only the die-hard hobbyists would go through the struggle. That was until Clive Sinclair came along. Clive Sinclair’s vision for home computers was a very philanthropic one. He wanted to make cheap, easy to use home computers that you could learn to program on. This was no more evident than in the ZX Spectrum. An incredibly affordable home computer (£175 in 1982) designed for the masses. It even came with a hefty manual on how to make programs for the device. The ZX Spectrum took off straight away, becoming the first mainstream home computer in the UK.

It was about this time that the BBC created the Computer Literacy Project, an initiative to teach computer programming to the masses. They partnered with Acorn and came out with the BBC Micro. A home computer released in 1981 designed with expandability and ease of use in mind. Accompanied by a myriad of peripherals and government subsidisation for education, the BBC Micro soon found its way into British schools around the country.

So, the year is 1982, Thatcher rules, there are two hot new home computers on the market and a sudden enthusiasm for learning how to not only use these computers, but make programs for them. Even the government is subsidising computers in schools to help educate schoolchildren. Out of everything you could program, what does a young, impressionable audience choose to make? The answer is video games, of course it’s video games.

This drive in computer literacy accelerated British video game development at a cracking pace and made it somewhat of a cottage industry, which was more than welcome in a recession hit 1980’s Britain where other, more traditional industries were failing. Programming was suddenly somewhat in vogue and an entire culture developed around it. There were magazines that printed reams of code for video games that, once painstakingly typed in by hand, became yours to jiggle around and poke at to see how it worked. The BBC aired The Computer Programme, complete with demos on how to use your new BBC Micro. Some (slightly unscrupulous) publishers even allowed bedroom programmers to send in their newly made games and, if good enough, would even publish them. There was opportunity abound to learn and perhaps get your foot in the door in video games here.

Both the ZX Spectrum and BBC Micro could run programs in one form or another of BASIC, a programming language where the clue is in the name as to how easy it was to learn. Both the ZX Spectrum and BBC Micro were literally designed to learn how to program on. This hype over the hot new trend, coupled with how easy it was to use them, led to a surge of great British born games. The ZX Spectrum had classics like Manic Miner, All or Nothing and Jet Set Willy while the BBC Micro had the legendary Elite and Starship Command, and that is still discounting the vast amount of great arcade game ports made for both of the systems. Of course there was also a lot of tripe released, like any generation of video games, but it was British tripe. It was homegrown, bedroom reared tripe inspired by these home computers that wouldn’t have ever seen the light of day were it not for the ZX Spectrum and the BBC Micro.

While the Spectrum and BBC Micro were both successful in their own rights, it was the ZX Spectrum that took the lead in the UK. Even if it floundered against the likes of the Commodore 64 state-side. Being considerably cheaper than its rivals and easy to code for, the ZX Spectrum was the home computer of choice in the UK. Sinclair even received a knighthood for his efforts. But to declare a “winner” somewhat defeats the point. The point I want to make here is how influential the 1980’s were not only in video game culture, but in British programming. This period was the stepping stone for many developers to get into the industry. Remember Elite: Dangerous? David Braben made the original, Elite, on a BBC Micro. You like Goldeneye? Tim and Chris Stamper, founders of Rare, got their start on a ZX Spectrum. Even the British powerhouse Codemasters got their start in this era. It is thanks to home computers like the ZX Spectrum and the BBC Micro that the British IT and video games industry is what it is today.

Fast forward 30 years or so and some of that 1980’s give-it-a-go-yourself pluck can be seen to be having somewhat of a renaissance. The Raspberry Pi, a bare bones, credit card sized computer designed to help promote the teaching of computer science in schools (Sound familiar?) has surpassed 10 million sales and the BBC Micro lives on in the Micro Bit, another small computer which will soon be given to every 11 year old in the country, courtesy of the BBC. Perhaps we might see a new generation of inspired programmers making great British games in the near future.