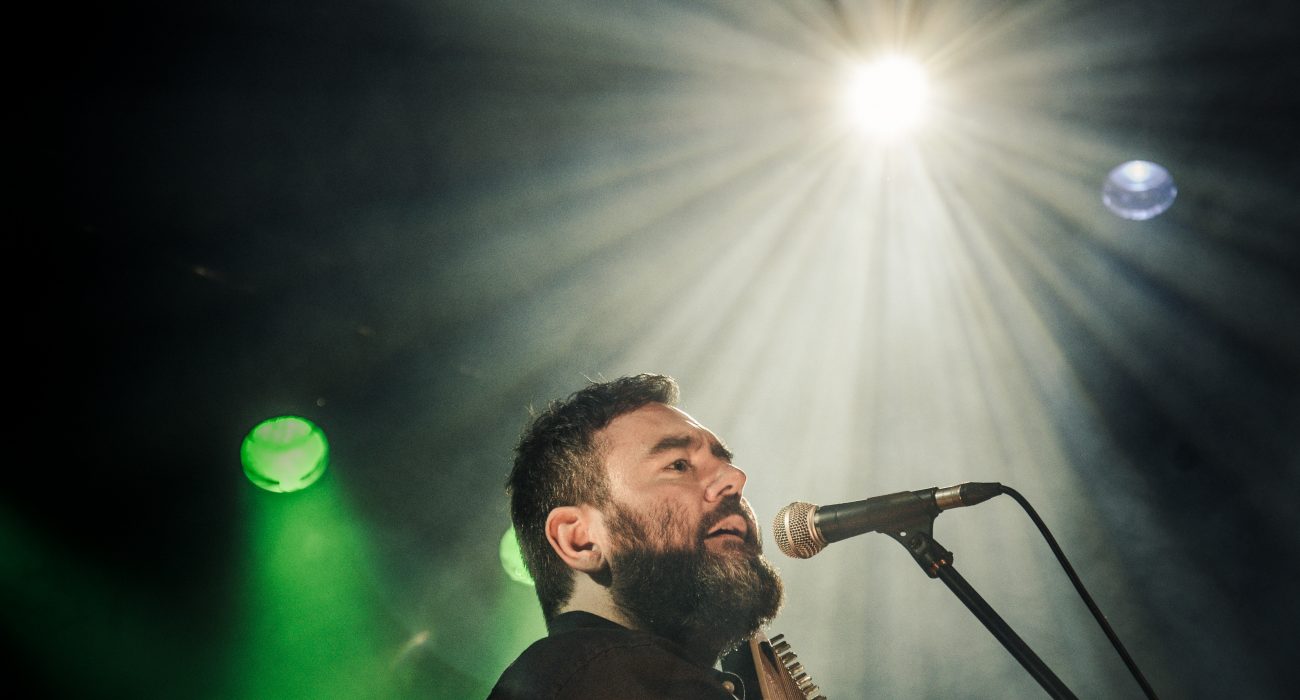 So that was Arab Strap’s last big weekend. In the late 1990s and early 2000s, Aidan Moffat and Malcolm Middleton crawled out of the pub and made sordid, frank music under the name Arab Strap. Over Middleton’s instrumentals—united by theme and by their slow pace, but ranging from folk to post-rock to throbbing electronica—Moffat muttered and crooned of drugs, bad sex, and drunken debauchery until, after a decade, they amicably retired the project.

Ten years on, Arab Strap have returned for five nights only. They come to the stage backed by a choir of bagpipes, and it’s a much bigger stage than the band played in their first life. So is the line-up, expanded to a seven-piece with the inclusion of violins and trumpets. Moffat, taking to the stage in a faded polo, baggy shorts and trainers with a can of cider in hand, appears the only thing that hasn’t changed. Well, that and the unusually high concentration of bearded Scottish men—what did I expect, you might ask, and that is a good question.

The expanded line-up creates a fuller, more robust sound than anything the band recorded, which comes as both a blessing and a curse. At times, it’s a bit too much—in the first half-hour, Middleton’s intricate guitar work and Moffat’s vocals are all too often crowded out by instrumental bombast, meaning tracks like ‘The Clearing’ lack the impact they deserve.

It doesn’t take long for everything to click, though: by the time they perform fan-favourite ‘New Birds’, the band have adopted a more nuanced sound, opening up space for Moffat’s spoken-word tale of temptation and old love—played out, as always, down the pub. The subtler instrumentation showcases the depth of Moffat’s songwriting: at his best, he is simultaneously grim, sad-eyed, witty, and tender, allowing him to forge a compelling emotional connection with the audience. After all, you don’t pack out the Ritz after a decade’s absence solely on the back of snarky misanthropy. When backed up by judicious instrumentation, it has a revelatory effect: downbeat disco anthem ‘The Shy Retirer’ is enriched by its violin backing, and ‘There is No Ending’, a popular wedding song (Moffat assures us this is true), provides a celebratory fanfare for the set’s finale.

The set wanders through Arab Strap’s history, from the hungover pulse of 1998’s Philophobia to the warm, lush swansong of 2005’s The Last Romance. At one point, the band is reduced to the original duo and they draw song requests from a ballot box left at the merch stall, rewarding the fans that waited a decade for their return with some very deep cuts – the joys of having built up a cult fanbase with no commitments to shut up and play the hits.

Having said that, there is just the one hit. Debut single and set closer ‘The First Big Weekend’ was once praised by Radio One’s Steve Lamacq as ‘the most perfect pop song ever’, and it’s hard to disagree—the wistful, warts-and-all account of a weekend out in Glasgow is irresistible. With its build from a spare acoustic opening, via an insistent lo-fi dance beat, to the euphoric refrain “Went out for the weekend, it lasted forever/got high with our friends, it’s officially summer”, it was the highlight of the night and, frankly, the weekend.

“It’s quite odd being confronted with your past self,” Moffat remarks early on. “To tell you the truth, I don’t think I’ve changed a fucking bit.” Ten years is a long time, but Arab Strap have retained everything that made them compelling the first time around.