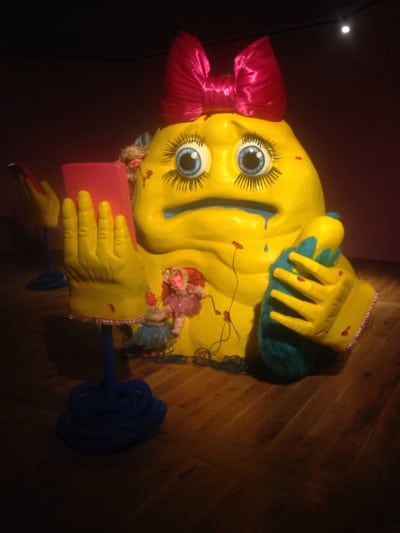 Since opening its doors to the public in 2015, HOME Manchester has truly expanded its artistic horizons, building on the well established cinema audiences it garnered back when it was known as the Cornerhouse, and providing a platform for the most ambitious and unusual artists to showcase their work in the fantastic exhibition space it boasts alongside its theatre and cinema screens.

Out of the more peculiar exhibitions it has hosted since its inception, Rachel Maclean’s brash, original and slightly terrifying new exhibition, Wot u 🙂 about? surely takes the crown as one of the most exciting.

Acclaimed 1987-born Scottish artist, Rachel Maclean, received her BA in Drawing and Painting from Edinburgh College of Art, and will represent Scotland at the 2017 Venice Benniale.

Her newest work vividly explores the concept of happiness and self-esteem, even infusing it with a subtle commentary on the nature of technology as a means of validation. In the social media-focused world we live in, much of the artistic and televisual critique of technology we are exposed to is often generic and a little tired in its message.

Yet, Rachel Maclean’s mixed media approach and use of garish colour palettes helps to mimic the gaudy, wholesome aesthetic of children’s television, creating something altogether more unsettling and creative than we’re used to seeing.

The exhibition itself contains a range of different mediums. The wall hanging exhibits, ‘We Want Data!’ provide our initial introduction to the bizarre setting Maclean has created. Perhaps the most prominent piece was the 30-minute short film ‘It’s What’s Inside That Counts’ being projected onto three separate screens, drawing from the audience’s first encounter with this unnerving world.

Combining the bold and sickly sweet visuals of her physical pieces with undertones of nightmarish fantasy violence, the film examines the overarching concepts of transitioning between childhood and adulthood, and happiness as a commercial product — themes which are carried throughout the entirety of the exhibition.

The collection of individual 3D sculptures are yet another manifestation of this theme. They take the form of large yellow children’s TV-style monsters, visibly decaying and rotting as if to suggest the negative impact of attempting to achieve acceptance and be yourself as a teenager, yet constantly being plagued by the relentless pressure to act in a certain way by those around us.

They may be ideas we are familiar with, but Wot u 🙂 about? is a true accomplishment in terms of bringing unforgettable visual novelty and cerebral twists to a well-established topic, so be sure to catch it at HOME while you have the chance.