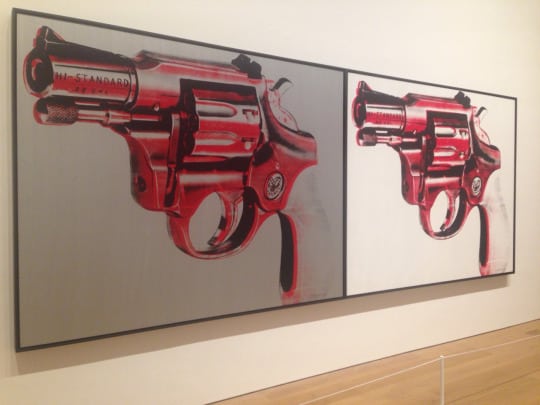 The Whitworth Art Gallery has been host to a range of interesting and widely-discussed exhibitions since its renovation and reopening in early 2015, but perhaps none more hotly-anticipated than Artist Rooms’ new Andy Warhol exhibition, presenting a plethora of his works, many of which have never been seen before in the UK.

I attended a preview to the exhibition in which art dealer, curator and longtime friend of Warhol, Anthony d’Offay introduced the works he kindly donated to the Tate, now on loan to the Whitworth. He explained, as is evidenced in the works displayed, the extent to which Andy Warhol’s near-fatal assassination by playwright and radical feminist, Valerie Solanas, in 1968 affected the tone of his work. Warhol was ultimately pronounced dead as a result of this attack, and subsequently revived, so it is unsurprising that ideas of mortality and death feature so heavily in his work in the wake of the event.

With this core theme in mind, one of the most recognisable items from the collection was his 1981 piece, ‘Gun’, depicting the exact model of revolver used in his attempted assassination. His familiar striking screen print style is as visually resonant as ever in this piece, reminding us once again why his pop art techniques became such a hallmark of 20th century counter culture. Continuing this theme in a far more visceral manner is Warhol’s self-published photograph of the shocking scars etched across his torso following the bullet wounds he garnered as a result of his 1968 attack. The gravitas of the event is vividly manifested throughout much of his later work, and many of the pieces on display in the exhibition.

The thematic diversity of Warhol’s work does not end here, however, with other clusters of work instead focusing on more complex and grandiose ideas about America, its politics and religion, with pieces such as ‘Are You Different?’ casting a spotlight on the issues surrounding Warhol’s own sexuality and the way it conflicted with his heavily Catholic background.

Naturally, his screen print ‘Dollar Sign’ pieces make an appearance — capturing Warhol at perhaps his most iconic, exploring ideas of consumerism and capitalism in 20th century America. The varying tones and different concepts explored within the exhibition act as an excellent, all-encompassing representation of the multitudinous facets of Warhol’s artistic career, and the influence of significant life events on his world views. Thanks to the carefully-considered curation by Anthony d’Offay and the Whitworth, people of all ages and backgrounds now have the opportunity to see some of Warhol’s most important, poignant and stirring works of art right here in the heart of Manchester.