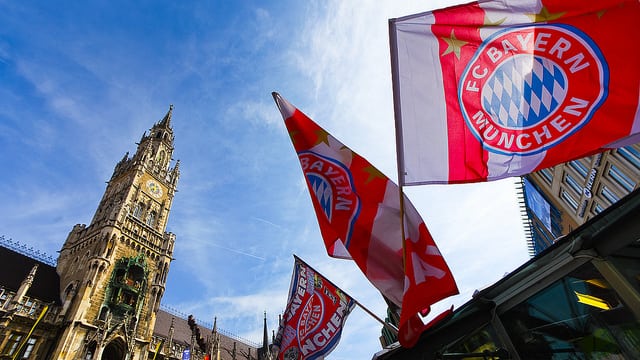 Josh Jenkins will be looking at the best European leagues each week – this week: Bundesliga

Game of the season so far: Bayer Leverkusen 2-3 RB Leipzig

The 54th Bundesliga season is on its way to becoming the most fascinating in many years. It has only taken eleven games to – not just get Germany talking – but the rest of the footballing world talking too. The astonishing rise of Rasen Ballsport Leipzig (you’re not fooling anyone Red Bull), Hamburg’s seeming descent into the footballing abyss, and a 29-year-old manager doing wonders at Hoffenheim have all contributed to the League’s intrigue.

Perhaps even more remarkable, the spotlight has been taken away from powerhouses Bayern Munich and Borussia Dortmund. Usually when these two play each other, like they did last week, the game steals the attention away from the rest of the league. But not this year. Everyone was talking about Leipzig and how they produced a scintillating comeback to beat Bayer Leverkusen and rise to the top spot.

The ascent of RB Leipzig is even more eye-catching when examining their short history. The Club were formed in 2009 after drinks company Red Bull controversially purchased the playing rights of the fifth division side SSV Markranstädt – in a move every bit as controversial as Wimbledon being bought and relocated to Milton Keynes. Since then, they have gained four promotions in just six seasons.

Devastating on the counter attack and with a defence that has only been breached nine times this season, they sit at the top of the table, three points above powerhouses Bayern and the rest of the chasing pack.

In their short time at the top table they have already created Bundesliga history. Never before has a team gone eleven games without defeat in their first season after winning promotion to the Bundesliga — the previous record was held by MSV Duisburg who went ten unbeaten in 1993. Leipzig are also the first team from East Germany to play in the top tier since Energie Cottbus were relegated in 2009. They buck the trend in every possible way.

With a unique management structure in place, their head coach Ralph Hasenhütt was only appointed in the summer after then manager Ralf Rangnick moved to the role of Director of Football. With a more hands on role than one would expect from a Director of Football, Rangnick’s thirty-three years of experience in the game have been vital in aiding Leipzig to the top of the table.

As the only other unbeaten team in the league to date, Hoffenheim have also been grabbing the spotlight so far this season. Managed by a twenty-nine-year-old tipped to be the next Jose Mourinho, their ‘we’ll score more than you’ mentality has been a real hit. The decision to appoint Julian Nagelsmann for his first senior coaching role certainly raised eyebrows. Many in the Germany media merely dismissed it as nothing more than a publicity stunt, but they’re being made to eat their words!

Nagelsmann has helped Hoffenheim to get over the losses of talisman Roberto Firmino and influential winger Kevin Volland. The goals of summer signing Sandro Wagner have certainly helped numb the loss. Sebastian Rudy also appears to have been transformed under the new boss. Excelling in both the defensive midfield and right-back positions, his superb form earned him a call up to the Germany squad during the recent internationals.

Like Leipzig, Hoffenheim are also a remarkable club, but for different reasons. Representing a village of just 3000 people in south-western Germany, they play their home games in the nearby Rhein-Neckar-Arena in Sinsheim — the stadiums capacity is ten times larger than the population of Hoffenheim.

With it still being early days in the season and with another twenty-three games to go, it will be tough for both Leipzig and Hoffenheim to maintain their positions in the top five. They both face tricky away games this weekend at Freiburg and Monchengladbach respectively. Also, Bayern will certainly not be happy with what is for them, the lowly position of second. Also, Dortmund finally seem to be playing the attacking football that has been craved since the days of Klopp again — evident from last week’s win over Bayern and the eight goals scored against Legia Warsaw on Tuesday. But if the two continue the way they are, then this season has the potential to be the most exciting and most historic Bundesliga season in a number of years.