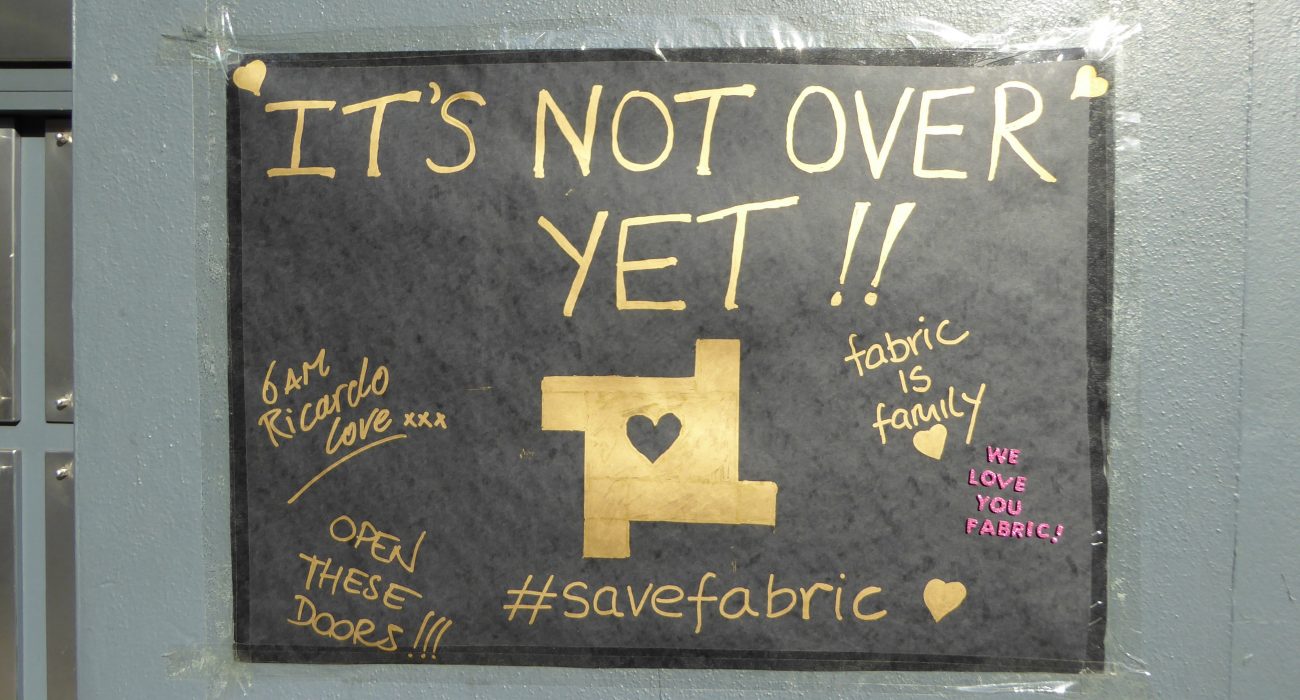 There may be some readers who are too young to remember having read anything that does not relate in some way to Brexit or Trump. To those people this may come as a surprise, but this article concerns something entirely different, and in all regards is about a far more shocking event: Fabric will be reopened.

And in just the utterance of the phrase ‘Fabric reopens’, the drug market re-emerges from the depths and begins to grow stronger. This is sad news, as the announcement some weeks ago that the UK wanted out of Fabric all but decimated any trade value that drugs had prior. An explosion of graphs, after the initial revoking of Fabric’s license, showed share-prices calling it quits and jumping off the cliff edge in the most slapstick and carefree of manners. Fabric was then unravelled, the jig was up; the war on drugs had been won.

This war, dating back to the beginning of time itself, seemed to be finally over. As we know, the conflict originally arose long ago, in Biblical times, when Eve ate drugs off a tree with the only excuse being that a talking snake, that was also Satan, told her to do it. Such was the strength of the drugs.

However, rumbles of the conflict re-emerged, as the idea gained momentum that the permanent closure was not in fact permanent, and that some form of ‘soft closure’ could be negotiated. This seems to be the standard operation nowadays — the leftists and liberals were not happy with people having opinions differing from their own and believed that the wrong decision had been made.

One novelist, claiming to be Scottish, yet named Irvine Welsh, went so far as to suggest that “It’s not a war on drugs, it’s a war on people. The war on drugs is a war on you. It’s a war on alternate lifestyles. It’s a civil war —the State against the citizens.” But then again, the novelist will be likely to have an overdeveloped imagination overwhelming his perception of the truth. It is also likely that, as a Scottish person, he will have an overdeveloped partiality to drugs.

Accusations were put forward that those in favour of saying goodbye to Fabric were misinformed and had been fed false claims about how the club was damaging to the UK. In fact, even the present writer became embroiled in the accusations of falsity when left-wing radicals cited a prior article on Fabric’s closure. They highlighted some small inaccuracies, namely that the club never purported to be “a laser quest arena,” nor did a night at Fabric ever entail “dolphins and humans merrily having it off with each other whilst on a melange of substances.”

Moreover, Islington Council’s claimed to invest the £350 million per week saved from the Fabric wear and tear allowance into the NHS.  Those rallying against the decision to revoke Fabric’s license said that this claim was, for various reasons, fanciful at best.

But surely over-analysing the actual claims that were made as to Fabric’s closure is simply a diversion strategy. Even worse, it is a strategy that conveniently ignores the fact that it was originally decided that Fabric was to be closed! In my eyes, Fabric’s closure means Fabric’s closure. No ifs, no buts, and certainly no “you have completely falsified your statistics regarding how many tigers had to be released into the club by the authorities as a deterrence against illegal drug taking.”

Many started attacking the legal process itself by which the license was revoked just because things did not go their way. Maybe the decision to close down Fabric did not quite get the popular vote, but the decision was nonetheless made, and should have therefore been supported by all self-respecting citizens. News alert: That is how democracy works. Or, well, it is not exactly quite how democracy works, but it is how things go.

As it stands however, those in power have shamelessly softened and are now allowing the club to reopen on the grounds that security procedures are tightened. Significant among the changes is the new rule that only those over the age of 19 will be able to enter and that IDs will be scanned by a machine. To ensure that they work on the machine, a man with a towel will be on hand to wipe clean your IDs and indeed any other cards from whatever states they were previously in. There will also be lifetime bans for those who are caught taking drugs, buying them, selling them, or using them as seasoning on any foodstuffs. Those caught making snow angels in illicit substances will be escorted out of the UK.

Additionally, the level of surveillance is set to increase. In terms of standard surveillance, one hundred golden eagles will be in rotation on club nights, flying above the crowds whilst using their highly accurate eyesight to identify anyone taking drugs. They will then use their speed of descent, mighty talons, and sharp beak to attack and eat the miscreant.

Regarding covert surveillance, an F-117 Nighthawk stealth reconnaissance aircraft will sit undetected in the centre of the dance floor.

All this just seems like typical Fabric bureaucracy to me, and I for one will be starting my ‘#SaveLuxuryApartments’ campaign right away.