7th of December at Albert Hall

It’s 21:30, and quips about whether Peter Doherty will even appear have become legitimate concerns. His support, Jack Jones of Welsh band Trampolene, started his set of hilariously surreal spoken poetry (topics ranging from ketamine to Poundland) by reassuring fans that Peter was here, in a not-so-subtle reference to the Libertines frontman’s infamously unreliable past. Regardless, the crowd is restless.

Doherty eventually appears and one thing’s certain: he’s drunk. As he stumbles to the microphone and begins mumbling acoustic ‘She Is Far’ from latest album Hamburg Demonstrations, one fan exclaims, “exactly how I like him!”. This is the unique appeal Doherty has: fans don’t want him sober and totally coherent – they want a performance, and Doherty, launching into fan-favourite ‘Albion’ and joined by his band (including Jones and Babyshambles bassist Drew McConnell), is happy to oblige.

Excluding one unfinished anecdote, he doesn’t talk to the audience, instead joking with each band-member, attempting to play glockenspiel (used spectacularly in ‘I Don’t Love Anyone’), drumkit (playful in ‘The Whole World Is Our Playground’) and violin to various degrees of success. Jones comes across as the proud son vying for a father’s approval and the sense of comradeship within his entourage is obvious.

Libertines song ‘You’re My Waterloo’ is a real highlight. A beautiful song anyway, but in this dimly lit, intimate venue it feels ethereal. ‘Hell to Pay at the Gates of Heaven’, a contrastingly upbeat tribute to the Bataclan attack victims is one of Doherty’s strongest performances of the night. Between his own songs, Doherty causes fervour, teasing the opening of classic ‘What Katie Did’ and covering multiple tracks, notably a fantastic medley intertwining The Velvet Underground’s ‘Ride into the Sun’ and Oasis’ ‘Don’t Look Back in Anger’. A two-line cover, startlingly, is of 50 Cent’s ‘P.I.M.P.’

Occasionally, the noodling threatens to kill the mood, but this danger is quickly extinguished as an encore featuring ‘Black Boy Lane’ and ‘Up the Bracket’ causes all hell to break loose as a mosh pit forms. The evening concludes with an intense, unintentionally acapella version of ‘Fuck Forever’ – Albert Hall’s curfew had been reached – but Doherty, clearly delighted with a brilliant crowd, has one more surprise, as he crowd-surfs in a throwback to the ‘good old days’ of early Libertines gigs.

Was Doherty in control throughout? Possibly. This was a messy, chaotic, unstructured gig, no more evident than when he decided to throw his mic stand into the crowd, initiating a minor brawl for memorabilia. It was unnecessary, childish, potentially dangerous and something we don’t see enough of anymore in an age of health and safety. This is rock ‘n’ roll. And nobody is more ingrained into its spirit than Peter Doherty. 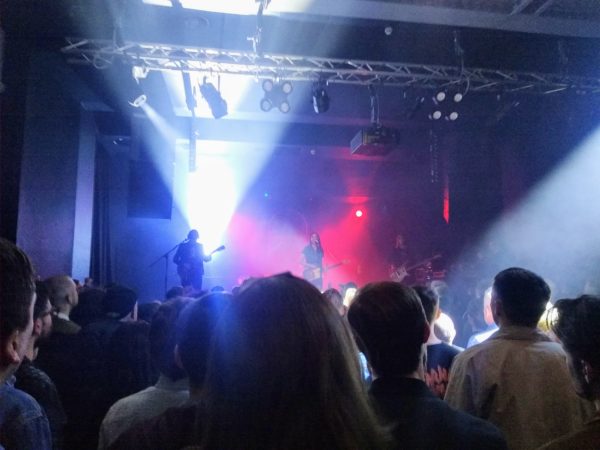 From Reeling to The Ronettes, The Mysterines show their quality at Band On The Wall