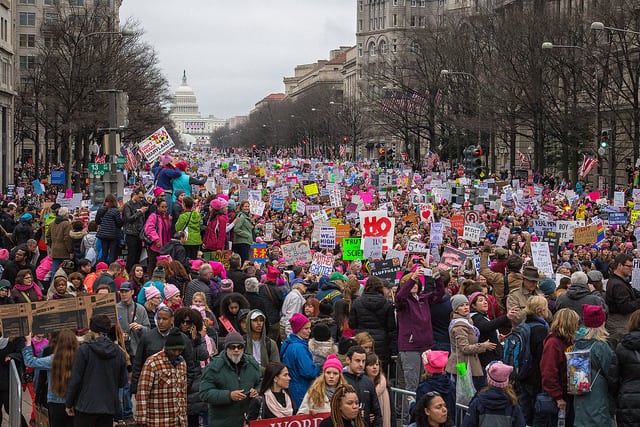 With an estimated 4.8 million people marching worldwide, the Women’s March on 21st of January brought women from across the globe together in protest, following the inauguration of President of the United States Donald Trump.

The March aimed to unite women across the USA and “stand together in solidarity with our partners and children for the protection of our rights, our safety, our health, and our families – recognising that our vibrant and diverse communities are the strength of our country.”

500,000 people marched in the flagship Women’s March on Washington, D.C., and sister marches took place on all seven continents, with over 400 marches in the USA and around 200 elsewhere in the world.

Shaun McGovern, a student from Maryland, was at the march in Washington, D.C.: “I study middle school science and social studies education at Towson University, near Baltimore, so many of the policy promises of Trump’s campaign would have a direct and profound negative impact not only on me, but on all of my students and their families.

“The march and everyone who participated were all incredible…it was amazing that so many people could feel so passionately about something and demonstrate for it without any violence or malice. The march was definitely a rallying event for anyone who cares about the environment, healthcare, and reproductive rights, among other issues, and healed some of the hopelessness I felt after the election.

“However, although I saw some signs about Black Lives Matter or LGBTQ rights, the crowd was majority white, and wealthy enough to travel to D.C. Moving forward, I want the movement to give more of a leading voice to women of color, immigrants, and the LGBTQ community so that we can finally truly guarantee liberty and justice for ALL in the United States.”

Much has been made of the marches and their impact in the news and on social media, including criticisms of its lack of intersectionality, but the organisers of the March are keen to stress that the work does not stop here and that much more can be done.

Launching their ’10 actions for the first 100 days’ campaign, they stated: “Thank you to the millions of people around the world who, on January 21, came together to raise our voices. But our march forward does not end here. Now is the time to get our friends, family and community together and MAKE HISTORY.”

With that in mind, here’s a round-up of some great events in Manchester that you can get involved with in 2017 to continue the fight for women’s rights and to ensure your voice is heard, supporting gender equality and equality for all:

The Wonder Women Festival is an annual artistic festival celebrating women and supporting women’s rights, held here in Manchester, where the Suffragette movement was famously born. The organisers have announced the first acts and performances to take place from 2–12th of March 2017.

According to the website, “Wonder Women 2017 promises to be as radical a programme of cultural events as the principles upon which the campaign was founded. Through boundary-pushing, experimental and diverse forms of performance, film, debate, talks, workshops and exhibitions, Manchester will celebrate those that won the fight for votes for women and the activism that continues to underpin feminist issues of our time.”

Events include: an International Women’s Day talk by Marika Sherwood and Peggy Mulungo at the Working Class Movement Library, comedy duo LipService’s ‘Exploding Women’ in the university’s own Stopford Building, and a night of techno at ‘Synthesis: All female Techno DJ’ to be held at Texture Manchester, with Oriel and Kerrie on the bill. Check out the website for details on lots more events planned.

On the weekend of the 4–5th March, the Manchester Media Group is hosting the second annual Women in Media Conference, celebrating successful women in the media and empowering students to take their first steps to their dream media career. Speakers such as BBC Breakfast’s Steph McGovern, Youtubers Grace Victory and Lucy Moon, Guardian Northern correspondent Nazia Parveen, and award-winning radio producer Kate Cocker are sure to make this conference, held at the People’s History Museum, a hugely inspiring and successful event. For further information on speakers and to buy tickets, check out the website or join the event on Facebook.

At the People’s History Museum, which celebrates and exhibits “ideas worth fighting for,” a new exhibition opens on the 25th of February (during LGBT History Month) depicting the long-fought battle of LGBT+ rights, ‘Never Going Underground: The Fight for LGBT+ Rights.’ According to the event page, “this unique exhibition is curated by members of the local LGBT+ community. It details the development of an LGBT+ movement, showing the internal and external struggles, the different party political approaches to equality, and the social and historical context of the last sixty years of activism. This is the complex and compelling story of a long and often bumpy journey.”

The Contact Theatre is hosting the Queer Contact Festival, which is in its ninth year, from 10–18th of February. Their website states that it will be “a diverse and inclusive festival proudly celebrating Lesbian, Gay, Bisexual and Transgender arts and culture in Greater Manchester as part of LGBT History Month… [with] a packed programme of theatre, music, dance, cabaret, comedy, spoken word and visual art at venues across Greater Manchester.”

The Mancunion will be previewing these events and many more in the coming weeks.