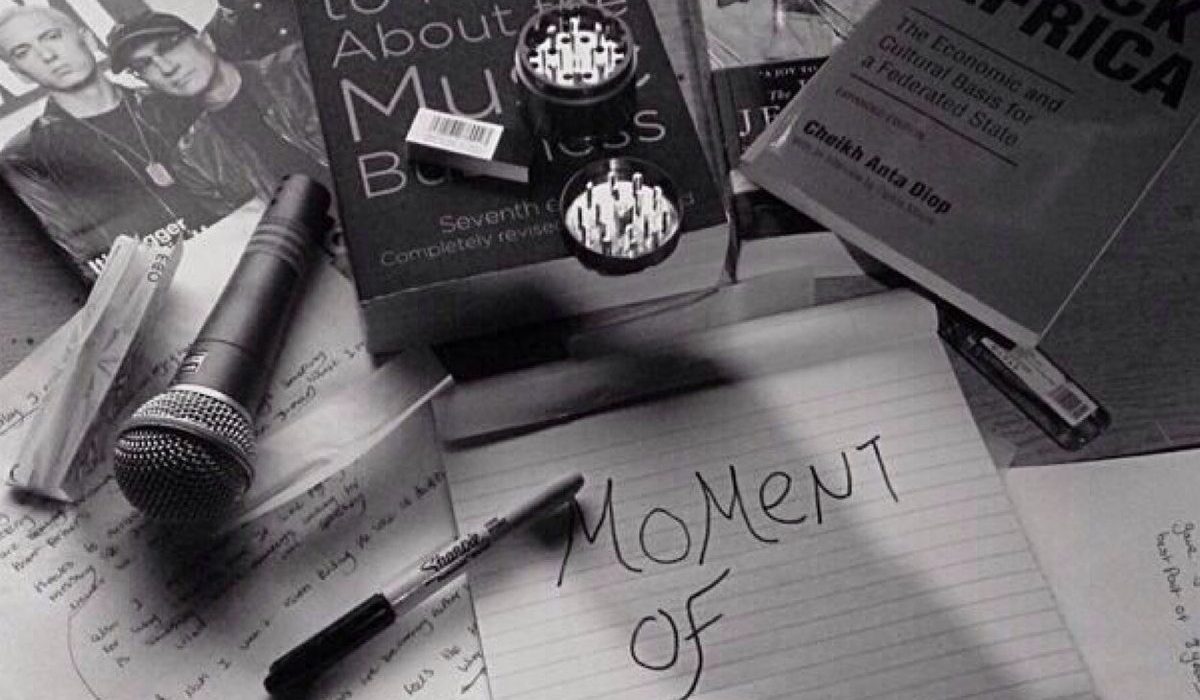 “I think my reputation within the scene’s changed. I get recognised a little bit now which is pretty funny and I get kind of flustered,” local Manchester rapper J. Chambers remarks on the success of his Merchant of Manny EP last July. The politically-charged MC has been a rising figure on the Manchester hip hop scene for the last four years. Following the success of his 2014 EP Moment of Silence, he supported huge names like Akala, Dead Prez and Talib Kweli. I spoke to him backstage at Band On The Wall before the pre-release show of his next EP Moment of Silence II: The Road to Perdition.

“The reception for Merchant of Manny was really good. I was kind of surprised because prior to that most of my stuff had been traditionalist hip hop, the samples are very boom bap. And Merchant of Manny, although it may not seem like it to the outside ear, internally with me and my team it was quite experimental. It was still lyrically what [my fans] expected but then sonically it was different.”

Moment of Silence II: The Road to Perdition involves a change in lyrical themes. “This new project is a continuation of the first Moment of Silence. The first one I wrote when I was depressed, and after Merchant of Manny dropped and everything started fizzling out, I went back into that way of being quite depressed and stuff. I was making these songs with [producer] Dyno and it was very therapeutic as I’m the type of guy that’s not a very emotional guy so I don’t like to talk about my feelings — it just manifests itself and comes out within the music.” Like many politically conscious artists, Chambers had noticed, “a lot of my music reflects the world but it doesn’t reflect myself, so I’m not really talking about myself too much [in past releases]. This project, you get to know me inside out really.”

Chambers is sure to maintain good relations with his fans and supporters, though it’s hard to imagine many artists like him being able to do this and much more without social media. He reflects on this, saying “most of my relationships with supporters and fans is based off face-to-face. I make sure I speak to people and I’m active on my pages so when people message in or ask for music, I’ll send them little exclusives and just keep people within the circle. I imagine without Facebook, we could still do that but it would be by the means of bringing them to my studio or whatever. So I think I could still be sufficient without the internet but my reach wouldn’t be as great.”

His beliefs extend further than just his music as he aims to use the power of education. “I’m in the process at the moment of setting up workshops using hip hop as a platform for better understanding the English language within GCSE English. I’m in the process of getting funding for that. I work in a college as well. It’s kind of mad — working with young people, it’s something I’ve always enjoyed doing and it’s reflected within the music, wanting to make a change and changing the way things are starts with changing the young people because they’re going to be the citizens of tomorrow so it’s a way I can continue the message of my music — as arrogant as that sounds!”

The conversation turns to more topical issues. The socially conscious person he is, I wonder if he has much of an opinion on the widely debated issue of cultural appropriation. His views are mixed. “Do I think that cultural appropriation exists? Yes. For example, a white person saying the n-word would piss me off, a black person saying the n-word would piss me off, but a white person using it in the sense of slang is kind of — just because of the society we live in, that would be classed as cultural appropriation because they’re taking a word that really shouldn’t be used in that context. But in terms of hairstyles and clothing, I think some of the stuff’s a bit sensitive.” He says he has no problem with white people with dreadlocks, using the example of women with weaves to show that culture is a two-way “melting-pot” system.

But he certainly thinks there’s a problem of appropriation within history and music. “There’s a lot of whitewashing within British history, like when I was in school, the only thing we were taught about [race issues] was Martin Luther King’s ‘I Have A Dream’, we weren’t taught about anything else. And then as you get older, you start reading more, you find out that black people didn’t just come over on the Mayflower, we had black Victorians and people like that. There’s loads of little bits that’s kind of appropriated within history that we’re taught.”

On the music side of the issue, “someone like Slim Jesus, who’s this Mormon kid who makes drill music, so like American gun-gangster-drug music. But he admits that he’s a Mormon and believes in that and says ‘I just do this [music] because I get paid money to do it.’ That’s appropriation. Because you’re taking culture and an art form that it respected and you’re devaluing it and you’re not doing it in a format that the people who started it want it to be portrayed in. And because of that music, he’s not the person who suffers the consequence of that appropriation. So for him pushing that up to the mainstream and showing all these middle-class suburban kids and their parents ‘this is what happens in these communities’, their perception of people who actually dwell within those communities changes. But he’s not affected by that because he’s outside of that community.”

Despite being a solo artist, he uses the term ‘we’ a lot when talking about his music, crediting the producers and management team behind him. “We’ve got a lot more support now. I’m trying to move away from doing as many support shows and doing more of my own things to kind of make everything more self-sufficient and etch my name in Manchester,” he says of his current goals while the future is certainly looking bright. “We drop a single on 6th February, then we have another single dropping after that, the project should be coming out [in March] on Medication Recordings with is [local collective] Virus Syndicate’s label . My manager’s trying to set up a little tour, we’ve got some European dates on the cards as well which is looking pretty cool. So yeah just growth, just taking things to the next level.”

Moment of Silence II: The Road to Perdition is scheduled for release in early March.