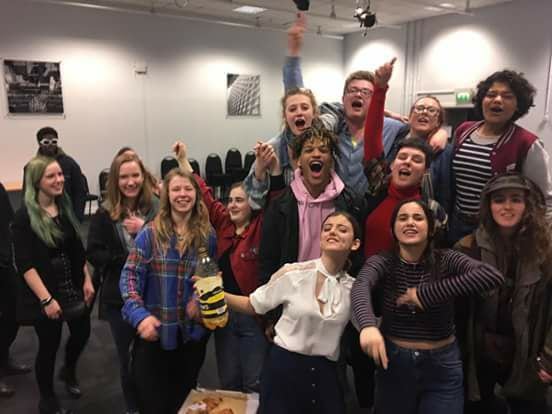 As some of you may know from the team’s relentless posting on every social media website, on the 29th and 30th of January, the University of Manchester entered a student team (Roma Havers, Damani Dennisur, Alle Bloom, Liv Barnes and myself) into a national poetry championship called Uni-Slam.

It was held in DeMontfort University and after taking several photos of graffitied walls to put on our Instagram, we went in to register. After a few workshops and an underwhelming lunch from Spar, it was time for our preliminaries. After four performances each from UCL, Leicester, Dublin, and Manchester, it was announced that both the latter teams were through.

We spoke to Dublin, and naturally they wanted to go for a pint, on a Sunday, in Leicester. We eventually found a small, quiet pub full of regulars who just wanted a quiet night out, and screamed over their small talk. Obviously, we were asked to leave. Alle, only had to smell the cider and hear an Irish accent and she was inebriated, which was fun as we had another hour of preliminaries to watch.

The other team from Manchester named Salford Speaks were performing against Goldsmiths, Sheffield, and Loughborough. Despite Salford not making it through, it was clear to see that they made an impression on both the audience and the judges.

The semi-finals were at the Curve Theatre. We had a few drinks the night before, so our rehearsals were nicely accompanied by the sound of Damani dry heaving. For this half of the Semi-Finals, we were up against Exeter, Leeds, Glasgow, and Sheffield. Before our performances, I could not help but feel sick with nerves. None of our performances were similar to the groups that went before.

However, when Damani stepped on stage, he performed it completely differently anything we have ever witnessed him do. I don’t know if it was the threat of blowing chunks all over the judges or whether something was put in his drink, but Damani completely brought something new to his performance which was well needed.

Roma and Alle followed with a poem about being sisters separated due to university, which again gave a nice contrast. Liv Barnes (as seen on the BBC) performed a new poem about having walls up in a relationship, but with a twist: the character puts up walls to hide the fact that they are not a good person, at all. To finish our round, Roma performed ‘You Smell Different’ — a plea for a friend to be honest about the suffocation and abuse they suffer from in their home life.

A standout performance in the whole competition came from Sheffield — a deeply ironic piece about the best piece of poetry ever created, reminiscent of Tenacious D’s ‘Tribute’. It brought out my witch laugh, which isn’t a good thing, but a compliment regardless. We finished in first place in the Semi-Finals, with Exeter coming in second.

The other Semi-Finals saw two teams get through. Birmingham, who combined comedic poetry with interesting messages, and added performance elements such as beginning with their backs facing to the audience. And Goldsmiths, a group of five incredibly accomplished poets, did what they do best, performing incredibly high quality poetry to the audience.

The finals were at seven, and by then I had been thoroughly drained by the colander of poetry. In the final, we had Damani’s ‘Mr Pissed at Politics’ which our team has been reciting for the past few days, Roma’s ‘Blood in the Water’, a hard-hitting middle finger to distant family members, and Liv’s ‘Pubs’, in which we re-arranged the microphones to look like a bar that she stood behind. (It does not count as a prop! We were given five mic stands, nobody told us what we could and could not do with them!)

We finished off with ‘Art is Dead’ a piece featuring the whole team. It was intended to be three minutes and we finished at around the four-minute mark. We each embodied a character, I was the person who banned art, Roma was a covert rebel, Alle was a political protester, Damani was an art addict and Liv police enforcement. At the end of the day, whether we went over time or not does not matter. We had come to Uni-Slam with the message that slam poetry is a space for variety and exploration of the form. We did not come to Uni-Slam as winners, and I’ve never been in a competition, so the fact that we did not win does not mean a pig’s ear to me.

We showed everyone how Madchester does it, and we did what we wanted to do. The rules of Uni-Slam state that the time limit is three minutes with a ten second grace period, and looking back, I would not have cut anyone’s part of the group poem to fit inside that criteria. It is difficult to mark the subjectivity of poetry, so it is best to do what the fuck you want and hope people enjoy it.

Goldsmiths were incredible, and worthy winners. They featured poets Laurie Ogden (whose final poem we’re still shaken from), Tommy Sisson (award-winning international wordsmith), Sara Hirsch (2014 Hammer & Tongue finalist) and Jack Emsden, who has no Facebook page for his poetry so I can’t steal his bio from there. However, I can say that he has a cracking poem about a TV show regarding Pigeons — both unique and entertaining.

This team will be performing at Hammer & Tongue in the finals. They certainly are ones to watch.
If you’re feeling gutted that you missed such a great weekend of poetry, fear not! The teams from Manchester and Salford are running a night at 256 Bar, Fallowfield, at 7pm on the 17th of February in order to showcase all the pieces performed in the slam.