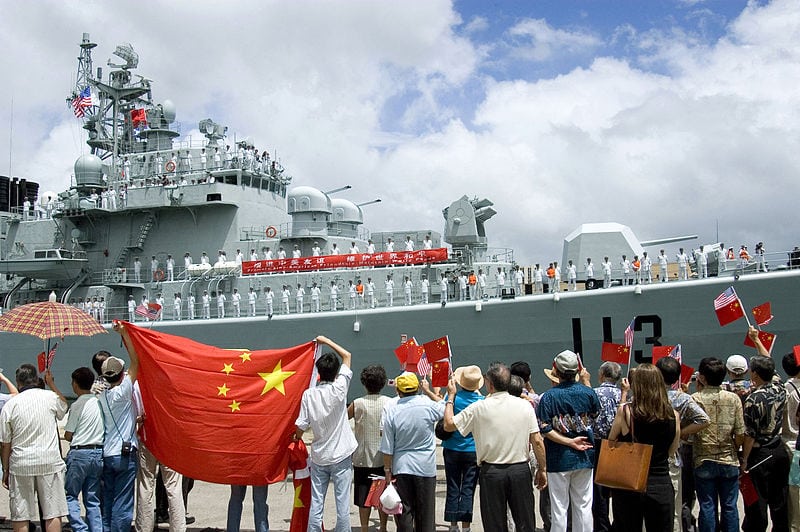 In its aggressive use of foreign policy, the Republican Government is in turn making an indirect yet powerful impact on domestic affairs, imitating the authoritarian processes that the Chinese Communist Party use to maintain their power over the population and state.

Chaos ensued after an executive order designed to severely restrict Muslim travellers from entering the US was signed into power by President Donald Trump. Protests of thousands of people followed the detention of eleven people who had attempted to enter the country from Iraq and other barred countries at New York’s John F. Kennedy airport.

In 2015, then-Governor Mike Pence tweeted that a state of similar affairs was “offensive and unconstitutional”. However, nodding and applauding along, the Vice-President has clearly changed his public opinion on this matter since his and his party’s unexpected entrance into power. What could be construed as nothing more than a pressured political flip-flop also seems like a cunning political strategy to strengthen Republican control over the White House.

President Trump claimed the move intends to “keep terrorists out” of America. If this is truly the primary objective of the order, then it certainly can be said that, despite its severity, it lacks in rather glaring areas. The seven countries affected by the ban do not encompass many of the largest Muslim-majority countries, including Pakistan, Indonesia and Saudi Arabia: the very same countries which have also proved some of the worst sources of terrorism and terrorists in recent years.

Perhaps the real aim of this executive order is exactly what it achieved: to stir up chaos in the US itself. America could be making use of an aggressive line of foreign policy to impact domestic politics, in a similar style to China. Since rejoining the international community and global economy under Deng Xiaoping in the 1980s, China has gone on to take an ‘assertive turn’, escalating territorial disputes and taking tougher stances in diplomatic negotiations, as seen in the Copenhagen Climate Change Talks in 2009.

In militaristic avenues, China insistently claims territory over most of the South China Sea, through which an estimated £2.5 trillion worth of ship-borne trade passes annually: a third of the world’s shipping. An economically vital area for the potential superpower, China is aggressive in its claim over the marginal sea against its rivals, neighbours Brunei, Malaysia, the Philippines, Taiwan, and Vietnam. In doing this, they have reached so far as to ignore and reject the 2016 ruling of a United Nations tribunal against their extensive maritime claims.

This aggression is not merely an act to accrue economics. The Senkaku Islands, an archipelago in the South China Sea controlled by Japan since 1895 after being found to be ‘nobody’s land’, can be considered a case in point. China only launched their claim over the islands once evidence of the possibility of oil reserves surfaced. However, the evidence is uncertain and, even so, the largest of the oil reserves would be relatively tiny given the island’s size.

Beyond any aim to acquire oil, the real primary objective for the Chinese government in this dispute is to stir up nationalist sentiments in their own country to combat a crisis of governmental legitimacy. Given the combative history between the two countries, it is important for the Communist Party to be seen by the population to be fighting Japan over territory, in efforts to motivate Chinese people to rally behind its government and to colour any opposition as unpatriotic.

Chinese nationalism heavily relies on the ‘national humiliation’ of past Japanese invasions, particularly the Second Sino-Japanese War and the bloodthirsty Rape of Nanking. Through their Propaganda Department, the Communist Party convert this anti-Japanese sentiment into pro-Chinese nationalism to maintain public support, presenting themselves as a patriotic force, protective of its people and territory. State propaganda calls the Senkaku Islands ‘Diaoyu’ and says they have always been Chinese.

A protective patriotic force is also exactly how the Republican Party desires to be seen. They too have a crisis of legitimacy: for the 2020 election, having lost the 2016 popular vote tremendously. To maintain their stranglehold on power, Republicans want to rally people against a common ‘enemy’ of foreign countries and people. They know it works: after all, why else would primary voters have responded so well to the promise to “build the wall”? Why else would Trump, fittingly, publicly rail against China’s sea disputes after labelling them “our enemy” throughout his campaign?

This order was intended to be divisive. As the partisan gap grows the political centre ground will vanish, all of which plays into the hands of the Republican Party in their efforts to build support for 2020. Many fear that the attempted imposition of the order risks multiplying foreign radicalisation. A terrorist attack involving Middle Eastern perpetrators would only strengthen the mandate and support of a Republican Party with these policies. For many US politicians, this is all just political strategy. 2016 was lucky: they do not want to leave it down to luck next time.

If President Trump truly does believe that China is the enemy of the United States then he certainly has no qualms with learning from his enemies.