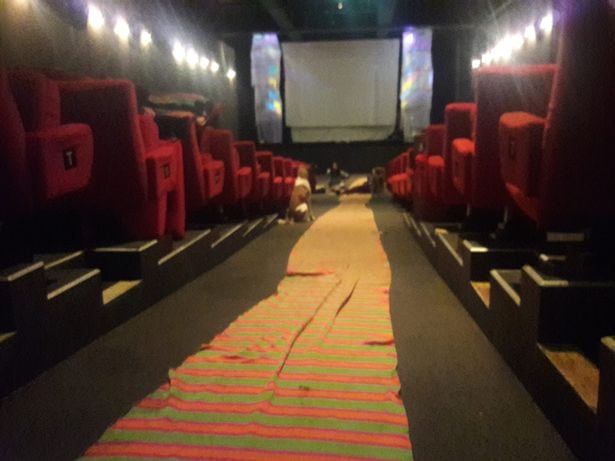 The now defunct Cornerhouse cinema, which first opened its doors in 1985 and closed in 2015 after a merger with Manchester’s Library Theatre Company to create the much-loved cinema, theatre and art space, HOME, has been transformed into a temporary art gallery by a group of squatters, many of whom are homeless.

The derelict Cornerhouse cinema building is one of many buildings throughout the city to have been inhabited by squatters in recent months, but the first to be used in such an inventive and rousing way.

Many have suggested that recent years have been some of the worst in modern history for rising homelessness and people living in poverty in the UK. At a time when Manchester’s streets are lined with people struggling to find work, lacking a warm bed and roof over their head that most of us take for granted, it is truly inspiring to come across stories of Manchester’s homeless population channelling creativity and positivity to turn their experiences into something personally enriching, and engaging for others.

Whilst it is yet unclear as to whether any action will be taken by local councils and land owners against the movement, for now it appears many locals, homeless or otherwise, are enjoying the display.

The group identify themselves as Loose Space and are made up of approximately twenty members. They are said to have brought in and installed their own audio-visual equipment in order to be able to host film screenings, art workshops and music.

The building is allegedly due to be converted into new flats, a hotel and restaurant in the future, but has been empty for some time since the opening of HOME just several hundred yards away on First Street. The group’s innovative use of the space for displaying a whole range of art and facilitating creative projects is a surely a testament to not only their own productivity, but also the building’s ongoing legacy as an enduring symbol of Manchester’s arts scene.