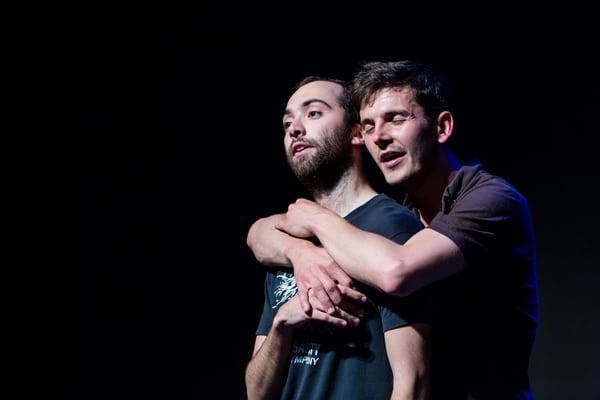 When Eurohouse begins, there is a sense that this is going to be a piece about the audience.

French Bertrand Lesca and Greek Nasi Voutsas introduce themselves, encouraging the audience members to speak to the strangers next to us and to all hold hands with each other. This energy is felt straight away, and we feel like we are part of a community.

However, the performance is about a lot more than just us in the room. It is about coming together and being aware that a theatre is a place that unites people from all over the world, particularly within the European Union.

The portrayal of the relationship between Lesca and Voutsas is an intimate and touching representation of the EU, particularly of the rapport between France and Greece. The two men come on together, doing a dance with acrobatic elements several times throughout the piece, where they literally have to lean on each other for support. They hold hands while they sing a French song, and wear the same trainers.

However, soon we realise that Lesca is in charge, almost abusing Voutsas – he gives him sweets, but after Voutsas has eaten them, Lesca demands them back.

When he is unable to return them, Lesca takes away his water and drinks the whole bottle.

The politics of the weakened economy in Greece, the facts of which are later projected onto the screen, are also powerfully and interestingly depicted when Lesca takes Voutsas’ t-shirt and jeans, putting them on top of his own clothes and leaving Voutsas stripped down to his boxers.

When he demands that he takes off the boxers as well, Voutsas leaves the room, and the audience witness Lesca’s failed attempt of doing the acrobatic dance without him, obviously implying the importance of the role of Greece within the EU and the dependence of the EU countries on each other, as well as the idea of trust between them.

Overall, the raw, real feeling of the piece completely strips back theatrical illusion – leaving only the two men on stage. Lesca operates the lights as well as the music, being in charge of pretty much the whole production.

The result is that we are made to feel sympathy for both men, as the complicated relationship between the countries is effectively reduced and contained within the dynamic of the two of them on stage. What makes this even more striking is the feeling that we have established a relationship with them – through direct interaction and eye contact, showing us that the issue is relevant to every single one of us.