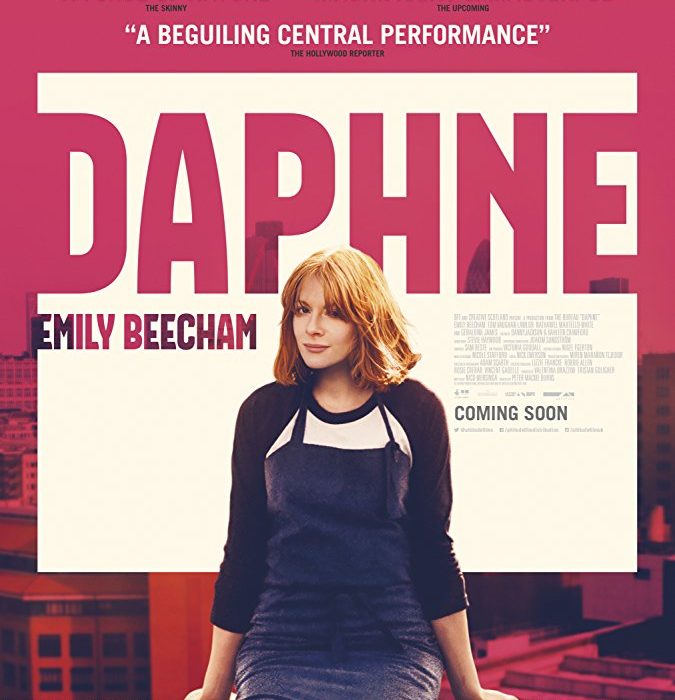 After a cinematic year dominated by masculinity — whether challenged in Dunkirk, ridiculed in Free Fire or celebrated in Transformers — it’s refreshing to sit down and be rewarded by a genuine and earnest female presence. While Wonder Woman’s success at the box office looked male-dominated cinema square in the face and demanded it move, her character never felt as tangible or true as Emily Beecham’s Daphne.

A disillusioned, thirty-something Londoner, Daphne is a junior chef who drinks to avoid the stupidity of daily life and dabbles in psychology, healthy cynicism, and Slavov Žižek. “You had to Google him, didn’t you?” Daphne asks of both her boss and the audience, firmly establishing her character as wilfully, yet healthily pretentious and, later, nihilistic. Once Daphne witnesses an act of violence, she comes to realise that her scepticism and motivated detachment has bred a feeling of emptiness. Though the focus on such a passive and neurotic character removes some of the narrative thrust the film needs, Daphne works as both an ode to the well-read, cynical intelligentsia and a warning that life is ultimately about making connections.

Proceeded by skillful rooftop shots of a drunk or hungover Daphne meandering around London that lend the film some visual splendour and establishes her isolated role within the sprawling city space, the connections that our protagonist does succeed in making are a mixed bag. It’s obvious that Beecham is the film’s best performer, with many of the supporting players struggling to keep up with her piercing realism. Scenes intended as improvisational banter are frequently in danger of becoming too awkwardly British, though thankfully the most prevalent supporting presence, Nathaniel Martello-White’s David, is likeable enough to forgive his clunky missteps.

Though Peter Mackie Burns’ feature debut could easily be mistaken for a particularly well-produced episode of television, the shooting manages to find a balance between filmic and practical. Daphne’s style is simple without being clinical, and frequently manages to find some unexpected beauty in the grime of backstreet London, the flour and sweat of the kitchen and the peaceful solace of Daphne’s squalid and homey apartment. Nico Mensinga’s scripting is suitably sharp, full of natural monologues and competition, colourful language and sarcasm, it made for easy watching knowing that, if the cinematography fell short of stimulating, the dialogue was always in safe hands.

Despite wishing the film to explore the seediness of London a little more, it manages to subtly navigate race and class relations that pertain in modern Britain. The man involved in the critical moment of violence is an Asian shopkeeper, and the film successfully, but not forcefully, highlights the violence faced by working-class migrants. Though it loses some of this edge throughout the subsequent narrative, themes of connectivity and cultural divides culminate wonderfully in the film’s well-earned final moments that play so convincingly, it’s hard to imagine the film ending in any other way.

Daphne’s slow and occasionally uncaring pace often clashes poorly with the slow awkwardness of her supporting performances, but Beecham is biting, and strangely likeable enough to hold attention. Her contempt and self-destruction may prove grating for some viewers, but taken as a deconstruction of the pessimistic intellectual it’s largely successful. Beecham and Burns work hard to construct Daphne as endearing and substantial character, despite her emptiness, to invariably fulfilling results. A great character study before a great film, Daphne introduces an exciting new talent whilst effectively challenging the smug neuroses of embittered intellectuals.