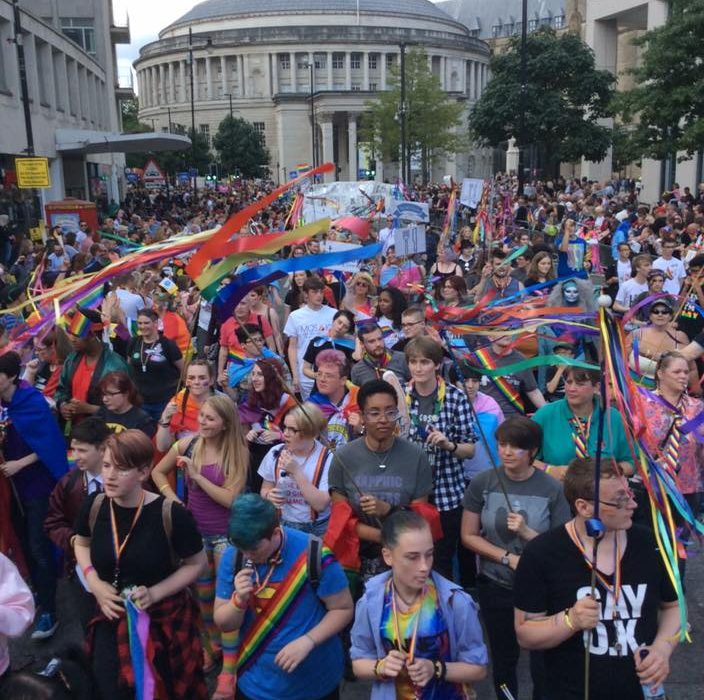 Compared to the dim, greying afternoon that Manchester’s spitting skies offer outdoors, The Proud Trust centre is bright and inviting; turquoise painted walls wear multi-coloured posters and murals, tables and chairs are positioned all around the room in wait for the in-built cafe’s customers, and a welcome sign next to the door invites — at length — anyone of any orientation, gender, race, or faith to come through the doors. You would never guess the rainbow-themed interior from the outside, almost like a secret, until you find yourself transported into this quirky, fun, and safe space that is a second home for many that frequent it.

The Proud Trust is one of the only one’s of its kind. It was the first purpose-built LGBT+ centre in Europe and, due to being council owned, The Proud Trust has managed to keep going where similar centres have had to be closed down due to funding issues on private tenancies.

The idea for the centre started in the seventies and our very own university (the then Victoria University of Manchester) had a big hand in helping the centre at the grassroots of the project. “Lots of people who fought for LGBT equality had phone lines and campaigns from their own houses,” Dr. Ali Hanbury, the centre manager informs me. “As things were progressing the university actually gave them some space on Waterloo Place, just opposite where the tin can building is now.” There they could conduct meetings, focus groups and organise protests and campaigns for their rights, which, at the time mainly focused on gay and lesbian issues. “As the project expanded they started looking for more space, they got another basement on Bloom Street on what is now the village. It wasn’t the village back then, it was mainly run down, old, industrial buildings, a few bars, but it was quite rough. There was street prostitution, raids on the bars that did exist, it was all very behind closed doors.”

The initial building of the centre itself came up against a host of issues, all stemming from openly allowed discrimination against LGBT+ people under the government of Thatcher. “The local council were keen to support the centre,” Ali tells me, however it was private landlords they faced problems with. “The law back then didn’t protect LGBT people. It was perfectly fine for the landlord we approached to say that he wasn’t selling his building to gay people.”  With private landlords being able to turn away tenants based on their sexual orientation, the centre fought to be built on council owned land, in which they succeeded. The building plans that took place in the mid to late eighties, however were then protested against by a local church. Because these disagreements were based entirely on what the building would be used for, rather than the actual building itself, the plans still went ahead, and the centre, being the first of its kind, opened up to the public in November 1988.

Around the same time, James Anderton, the chief of police in Manchester, made some wildly homophobic comments about the HIV/AIDS crisis. “He was being really abhorrent. Thatcher at the time saved him from losing his job and then introduced section 28 to say that no local authority could promote homosexuality,” Ali tells us. In response to this public and powerful hatred, Manchester hosted the “Never Going Underground” march in 1988, the UK’s largest ever gathering for LGBT+ rights of the time.  By the November of the same year the centre was open and they hosted a grand opening party to celebrate the success.

“Manchester was at the forefront of a lot of LGBT campaigning and activism,” Ali states. “We still have really strong and supportive links through the university. We’ve got about fifteen groups that meet here, alcoholic recovery groups, a BME project called Rainbow Noir; we also have an office for the lesbian immigration support group as well as an inter-faith group. We even had an LGBT disabled pride here over the pride season!” Clearly people from all different walks of life are engaged with what the centre has to offer. For many it’s a source of hope when they have no-one else to turn to. Kept away from the village itself, the centre runs little risk of publicly outing those who aren’t out yet and are perhaps struggling with the process.

“We’re quite unique for a LGBT charity” Ali admits. “We have a lot of women staff, BME, disabled, and trans members of staff. That’s not always reflected in other LGBT organisations.” This range of diversity means that those who come to the centre seeking support are likely to find someone to talk to who has had similar experiences and offer some empathy. “We have dedicated projects such as lesbian and bisexual groups as well as young men and one-to-one trans workers as well as a trans youth group.” Being able to openly talk to young people about the way they are feeling and what understandings around sexual orientations as well as gender identities are is something the centre aims to tackle. The centre just released a book aimed at primary school children called “Alien Nation” which discusses gender identity and has been received really well.  “We have quite an extensive training program where we work with professionals who may be in contact with LGBT children such as children. We’ve even given talks at the university to nursing and medical students.”

Ali and I discussed whether the national curriculum is failing LGBT+ youth in schools by not representing them enough. “I think the issue is that a lot of schools would deny that they do have problems with homophobia, biphobia, or transphobia,” Ali tells me. “However what we do know is that there is a massively heteronormative and cis-gendered script that schools enforce in their curriculum. By only including LGBT discussion in sexual health lessons it hyper-sexualises it, that’s really problematic. If in English lessons we spoke about how Shakespeare had same sex relationships, that would be useful. We have just been government funded to work with the education system to run a project called the rainbow flag award. We are working with around 270 schools to take a whole school approach to LGBT education. We look at cross-curriculum stuff, school uniform policies and major school policies.”

To celebrate the thirtieth anniversary of the centre’s opening next November, The Proud Trust are hosting a very exciting array of celebrations over the next 12 months, entitled ’30 Years Queer’, kicking off on the 30th November this year. “It’s all about raising the profile of the centre and celebrating all our great work and the fact that we are still here!” Ali exclaims. “The centre has been under threat through its history and people campaigned to keep it open, so it’s important that we still get to be here.” The celebrations will include different fundraising events, as the centre is hopeful to increase in size. People are taking part in half-marathons and round-the-world bike rides, there will be parties and nights out hosted by ‘Shit Lesbian Disco’, of course there will be Pride in the summer, a walking history tour of the city connected to the centre, and even a street party on the actual 30th anniversary next year, as well as an after party.

30 Years Queer celebrates everything that the centre has faced and stood up for, all the discrimination and pride its history entails, all the struggles its members have fought against, and everything it still seeks to change now. With such a brilliant range of diversity and challenges it’s tackling, the centre is an extremely necessary part of the Mancunian cityscape and has always been. Manchester has been at the forefront of LGBT issues and rights in the UK for decades and to celebrate this and make sure this doesn’t change, we need to protect and support organisations like The Proud Trust. Whether you wish to volunteer at the centre’s cafe, fund-raise for them, or simply learn more about the centre, you can find the group on Facebook, visit their website, ring on 0161 2220766, follow their twitter, or send Ali an email at [email protected]. If you would simply like to make a donation, you can do so at www.localgiving.org/donation/theproudtrust.