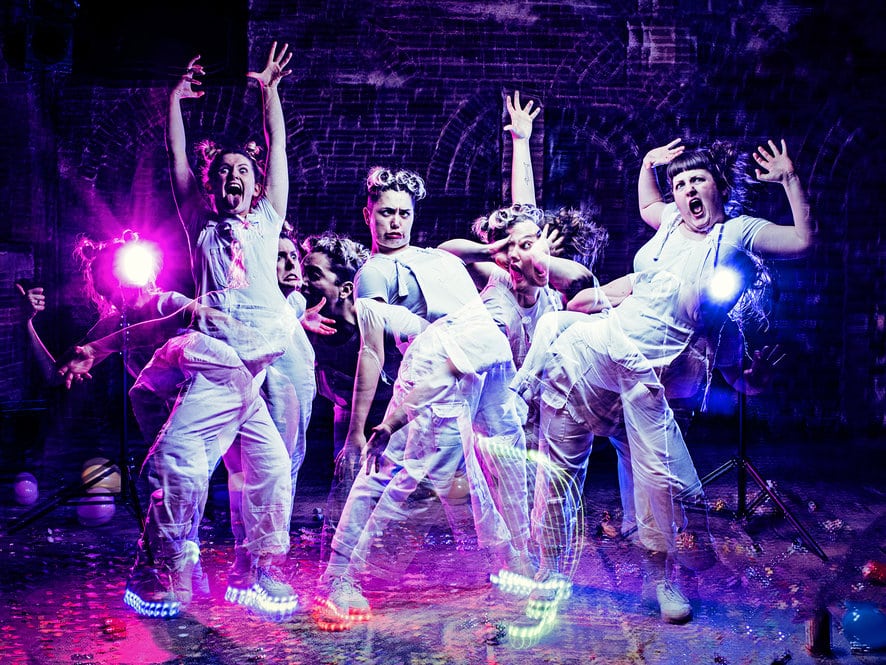 Review: We Are Ian

As you walk into the theatre, immediately you are bombarded with the sound of rave music combined with a flashing, neon: “We Are Ian”. Taking a seat, you are apprehensive of what is to come. 45 minutes later, dancing on the stage with your fellow audience members, it takes a moment to process the pure crazy genius that you have just encountered.

The three actresses, In Bed With My Brother’s Kat Cory, Dora Lynn, and Nora Alexander, begin the piece with a mad dance to classic bass beats, showcasing their stunning light up trainers, stopping only to listen to Ian. Represented by a glowing light bulb suspended from the ceiling, DJ Ian Taylor becomes an almost God-like figure, rhythmically pulsating with light as he speaks. His “followers” listen to his every word, as do the audience, captivated by this simple use of staging.

Following Ian’s stories, the three women take the audience on an oddly beautiful journey through the Manchester rave scene in the eyes of Ian. The best thing about this show is the way they make the audience feel involved, teaching us dance moves — specifically the hot potato and waterfall fingers —, giving us “drugs” (biscuits), hugging us, and just generally sharing the party with us.

However, there is a poignancy to the story as we begin to hear Ian cry, upset that the good times are over. Blaming Margaret Thatcher, we see video clips of her, merging with clips of workers and factories. In front of this, the three actresses continue their repetitive dance, over and over again, as the clips introduce Ronald Reagan before including images of Theresa May and Donald Trump, alluding to the idea that nothing changes politically.

All the while the women are dancing to the point of exhaustion, the audience have a genuine concern for them until they eventually collapse on the stage, physically unable to move.

The actresses have a beautiful dynamic, creating crazy, clownish characters, which an audience develops an amazing connection with. Their pure determination and energy are applaudable in themselves, without even commenting on the fantastic acting that is occurring. Cleverly choreographed, together they create a rapidly fluid piece, dragging the audience along with them.

In Bed with My Brother manage to fuse together dance with politics to create an immersive piece of theatre which highlights the lack of political change since its setting. At just 45 minutes long, this piece certainly leaves the audience begging for more.