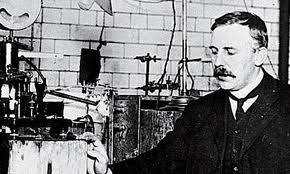 100 years after first splitting the atom in a milestone of nuclear physics, the work and life of Manchester alumnus and Nobel Prize recipient Ernest Rutherford will be celebrated with the opening of a new exhibition.

The new guided tour of one of the University’s most significant scientific spots is set to offer visitors unprecedented access to the laboratories where this ground-breaking discovery was made.

One of the University’s Heritage Heroes, Rutherford began his scientific research in Canada, developing theories which would lead to him being awarded the Nobel Prize in Chemistry in 1908. Often called the father of nuclear physics, his work led to the discoveries of the now well-known concepts of radioactivity, such as half-life and the different varieties of radiation.

Following his relocation to Manchester in 1907, he began work on his hypothesis of atom structure, revealing the small nucleus at the centre containing charge, which would be confirmed by the infamous ‘splitting’.

The 1917 experiment that resulted in the split involved an artificial nuclear reaction – the first of its kind – between helium and radioactive alpha particles, and also led Rutherford to discover the proton, the subatomic particle which carries the atom’s positive charge.

This discovery has been credited by Professor Sean Freeman of the university’s nuclear physics department as having “created the modern field of nuclear physics right here in Manchester”.

The pop-up exhibition, entitled “Rutherford’s Manchester: the birthplace of nuclear physics”, will take place in the Rutherford Building. In the Rutherford Room, which was once the private research room of its namesake and still contains his original laboratory bench, visitors will hear about the history of advancements in science and computing made at the university by its more than 20 Nobel laureates in science, and learn more about Rutherford’s life and the impact of his work. A current science PhD student will guide visitors through the exhibition, which features replica scientific equipment, interpretation panels and archive photographs. Today the Rutherford building is home to university administration, meaning that this guided tour offers its attendees a unique opportunity to step inside one of the university’s most historic sites.

Although one of the most famous, Rutherford worked here alongside other researchers who made significant contributions to the field of nuclear physics — the Geiger counter, a device for measuring radiation, was co-invented in Manchester by Hans Geiger. Later on, another Manchester researcher would discover another of the essential component parts of the atom — James Chadwick, whose research would form the foundation for the construction of the American atomic bombs which would end the Second World War, discovered the neutron in 1932.

Following its inaugural viewing last week, guided visits to the Rutherford Room will be held monthly (with the exception of January), and a place can be booked through the university’s history and heritage website.

The centenary of Rutherford’s breakthrough has also been marked this year with the announcement of a government fund of £100 million, intended to entice international scientists to travel to the UK to conduct research.

Speaking at the scheme’s launch in July, Universities and Science Minister Jo Johnson spoke of Rutherford as “one of our most distinguished scientists,” going on to stress the value of the work carried out in the UK by talented immigrant researchers, such as Rutherford himself.

“The Prime Minister has made clear she wants us to be a country that attracts the brightest and best minds,” Johnson added. “Rutherford and his immense contributions to science exemplify our vision of a Britain that is open to the best minds and ideas in the world, and stands at the forefront of global collective endeavours to understand, and to improve, the world in which we live.”