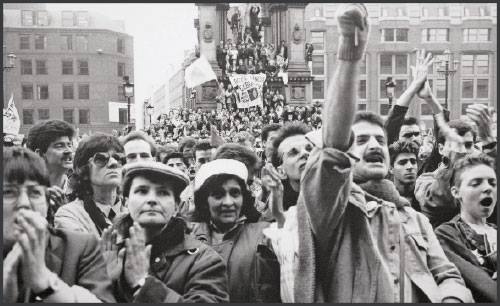 Manchester and the history of HIV/AIDS

The progress we have made with HIV in the past few decades has been nothing short of miraculous. Thanks to advances in modern medicine, people who are living with HIV go on to live happy and healthy lives. Regular testing to know your status is the best way to combat HIV transmission, and early diagnosis and treatment ensure that a person living with HIV will become undetectable and will not transmit the virus – the medical concept of Undetectable = Untransmittable or U=U.

The LGBT community was affected in countless ways by the AIDS crisis, and a worldwide mobilisation of this community and our allies were ultimately what pulled us through it.

Manchester has always been a unique city in terms of its community, and this is especially true with its LGBT people. This month is LGBT History Month and it’s important to remember the decades of progress and fighting Mancunian activists have made against HIV.

As HIV began to emerge throughout the United Kingdom, fear and uncertainty about how it was transmitted led to widespread panic. Sensationalist media reporting only made this worse, stigmatising those living with HIV as well as anyone vulnerable to the disease. It was often colloquially known in the tabloids as the ‘gay plague’.

In a 1987 editorial, The Sun newspaper openly called for the deportation of all gay men from the UK. Uncertainty about how HIV was passed on initially led health authorities to adopt disproportionate and sometimes draconian infection control measures. In 1985, one man diagnosed with HIV was quarantined against his will at North Manchester General Hospital.

In 1988 the Conservative government introduced ‘Section 28’, a clause of the Local Government Act forbidding the ‘promotion of homosexuality’ and ‘pretended family relationships’ in schools and local authorities. In practice, this prohibited any discussion of services for homosexuals and marked the first anti-gay legislation for over 100 years.

At this time, the Chief Constable of GMP was James Anderton. Known by the moniker “God’s Cop” and infamous for his old-fashioned views, Anderson stated publicly in interviews that he believed homosexuality should never have been legalised, and that those with HIV were “living in a cesspool of their own making”. Anderton was known to order raids on gay bars and his tenure as Chief Constable marked an all-time low point in the relationship between the police and the LGBT community.

In the late 1980s and early 1990s, the combination of HIV/AIDS, Section 28 and James Anderton meant that many LGBT people felt under attack, galvanising the community and fuelling waves of protest and direct action across Manchester. The first meeting about HIV took place in 1984 at The Thompsons Arms leading to the formation of Manchester AIDSline in 1985, one of the first HIV-specific organisations in the country.

The helpline offered support and information about HIV to thousands of callers. In 1988 tens of thousands of people rallied in Albert Square against Section 28, the largest demonstration in the country. Activists from this demonstration would go on to form the Manchester branch of ACT UP.

In 1994 campaigners from Manchester MESMAC set up Healthy Gay Manchester, an organisation dedicated to improving the sexual health of men who have sex with men. HGM launched a free condom and lube distribution scheme in Greater Manchester that became a model for the rest of the country. In 2000, HGM merged with the Manchester Lesbian and Gay Switchboard to become the Lesbian and Gay Foundation which is now LGBT Foundation.

Operating since 1985, Manchester AIDSline was succeeded by George House Trust. GHT is today the largest HIV charity in the North West and is currently the main provider of services to people living with HIV in Greater Manchester. George House Trust along with the LGBT Foundation, Manchester City Council, the NHS, Brook Manchester, the BHA and the Manchester World AIDS Day Partnership – a collective of organisations that marks World AIDS Day every December 1st by showing solidarity with all those living with HIV and remembering everyone who has lost their life to the virus.

Launched this LGBT History Month, the ‘Let’s Talk About Sex’ exhibition documents the stories of people across Greater Manchester involved or affected by campaigns on sexual health and HIV prevention sparked by the AIDS crisis. Providing a fuller picture of this story, it also features video testimonials from those involved that can be found in the North West Film archive pods at Manchester Central Library.

Events are still happening across Greater Manchester for LGBT History Month that is well worth checking out, as well as those ran by the UoM LGBTQ+ Society.