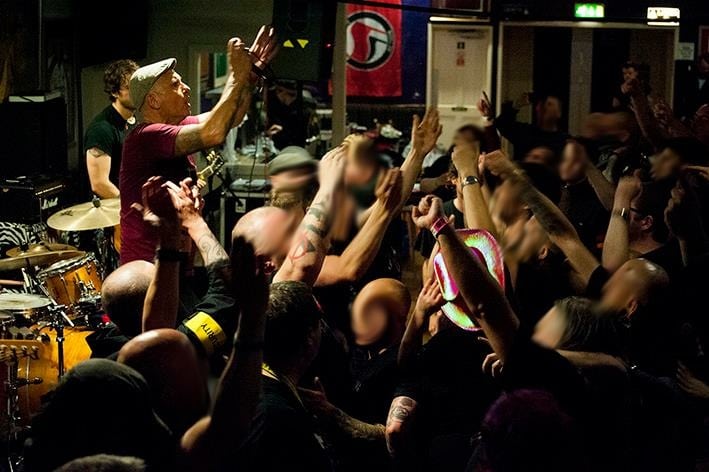 0161 Festival: an interview with the founder of Manchester’s anti-fascist festival

This week I sat down with Joe, the main organiser and founder of 0161 Festival, and anti-fascist and anti-racist music and cultural festival that is celebrating its 5th anniversary this June. We discussed the birth of the festival, how it’s changed over its lifetime, and what we can expect in the future.

Joe was originally the main organiser for the event. “We started out five years ago now, doing benefit gigs throughout Manchester and then we decided to do the whole thing, a weekend-wide one. Now it’s got bigger there’s a committee of us just organising.”

Joe tells me that the aims and objectives set out for the festival were to “combat injustices as well as racism, fascism and xenophobia in various guises, as well as uniting divided communities.”

“We organise groups and events to bring people together and to raise money for antifascist organisations throughout Europe, community organisations, both in the UK and abroad, and specifically over the past couple of years, we’ve tried to engage overall communities and spread what we’re doing, regardless of the music you’re into; whether you like hip hop or drum n bass, punk, hard-core, whatever, then we’re all united under the anti-racist banner and to then further that, to do theatre, sports, poetry, art, all sorts of stuff under the banner of the 0161 Festival.”

I was interested in what specific causes had been supported with the money raised from the festival so far.

“Over the years, we’ve made money for the anti- fascist groups in Manchester, the first couple of years we made a loss, it’s how things work, starting a festival it was something that we dealt with, and what was more important to us than losing money over the last couple of years was to ensure that we had the stepping stones to grow and empower more people.”

“There was a squat that was burned down that we raised some money for, also our friends in Poland and Russia that we gave money to, along with an anti-fascist football club in Belarus, a country where it’s very difficult to be left wing. And the point is now for us to go forward to not only raise money for groups but for us to go into communities and help people create new things, create new projects whether that’s art or music, to combat injustice and to move forward, creating a more free culture for everyone involved.”

Over the last five years the festival has grown considerably. “The first couple of years we had about 300 people turning up which was great, but not too many people are into punk or hardcore music, or the culture surrounding lots of anti-fascist events.”

Joe felt that the festival was essentially just “preaching to the converted”, which a lot of left-wing politics is, “so we realised we needed to attract people with different views, to bring people together and demonstrate how we’re all similar. We’ve realised we need to work more on community action, involving more local kids and encompassing more sport and art, so people think of 0161 Festival as a ‘cultural festival’ rather than just a music festival, where it runs maybe seven or ten days a year but throughout the year, we’re still doing things and the name of 0161 Festival is there.”

There is still more to come though, and Joe believes that the festival has far more to offer in terms of development. “We wouldn’t want to put a limit on ourselves- the aim is just to keep going, encompass as many things as possible. We’ve has a really good past couple of years where a lot of organisations and groups have come to us and been like ‘Yo I wanna do this and do this,’ rather than us all working in our own little circles, we should encompass them all into a bigger circle, and all work together. We want to get our own space, to get our own venues that are run by the people rather than companies or corporations, and to do that across Manchester.”

The 0161 Festival website talks a lot about combatting the ‘cliquey’ nature of anti-fascist events. I was interested in whether Joe believes the festival has been successful in doing this, as well as making a more inclusive event.

“I would hope so, I’d like to think that we have. This year we have two hip hop and drum and bass after parties, and also a night that’s doing old school and reggae and acoustic nights and a lot like that. Being anti-fascist should not be weird or out there. It should be a general point of view, and we’re trying to keep the same people involved as well as bringing in young people. I was flyering the other day, and gave one to a couple lads and they were like ‘Woah I’ve never heard of it before’, you can do that to two kids who look completely different but believe in the same thing and get a positive reaction.”

The next big aim for Joe is to bring the festival to a student audience. “It shouldn’t be a closed, cliquey thing” he says, “being antifascist is a normal thing to be. If you look at Germany Spain and Italy, they have huge mass movements and counter-cultures, especially with young people. Here it’s not as big and it’s about knocking down those walls and divisions between cultures and uniting the people.”

You can buy tickets for the upcoming 0161 Festival, as well as find out more about the lineup and the festival in general, on their website here.