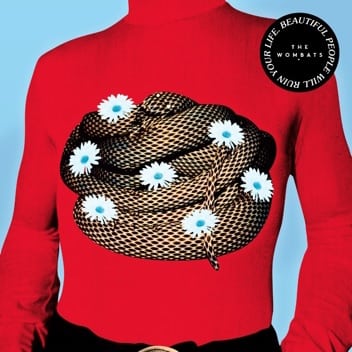 Review: The Wombats – Beautiful People Will Ruin Your Life

Liverpudlian rock trio The Wombats’ latest release Beautiful People Will Ruin Your Life is a collection of songs that seem relatively unambitious.

The Wombats are one of those indie bands from the good old days that have managed to stick around through thick and thin. From their post-punk revival on their debut, to the synth-heavy tricky third album “Glitterbug”, they’re a band that have consistently demonstrated their ability to change with the times.

But now on Beautiful People… what made the band so innovative and exciting has been watered down to something that, although professional and polished, just isn’t that interesting.

It comes as no surprise that ‘Turn’, ‘Cheetah Tongue’, and ‘Lemon to a Knife Fight’ were the first three singles to be released from the album as they’re arguably the only songs that make any attempt to be — for lack of a better word — fun.

‘Black Flamingo’ released just days before the album dropped, runs in a similar vein to the other singles. “I wanna love you but it hurts, hurts, hurts” is a particularly potent lyric from the song that pretty much captures my feelings towards this album.

The main concern here is that for me, these singles were ‘growers’. I had to listen to them several times over before I could conclude that they weren’t that bad an ominous foreshadowing for the rest of the album.

Therein lies the issue with Beautiful People…. Nothing picks me up and shakes me about in the way that songs on their earlier projects did. There’s no ‘Moving To New York’ moment, no euphoric ‘Tokyo’ anthem, and no reflective, heart breaking ‘Greek Tragedy’.

On the first listen I didn’t find myself being wrapped up in any sort of feeling other than just “meh”. In fact, only on my third attempt braving the album could I identify a few decent non-single tracks.

‘Ice Cream’, which appears almost at the end of the album is probably the most reminiscent of what I like to call classic Wombats. With an abundance of strange metaphors and a bass line that sounds like the lovechild of The Cure and “AM” era Arctic Monkeys, it stands out effortlessly against an otherwise forgettable series of songs.

‘Black Flamingo’, with its fuzzy guitar riffs is also a redeeming feature that wouldn’t go amiss on previous projects. There’s a point in the song that seems to rediscover the soaring qualities that The Wombats are more than capable of producing but the rest of the album plateaus from there on out.

As a band with its members now in their thirties, it comes as no surprise that the once youthful frenzies have been replaced with more mature takes on themes of isolation and modern romance. This shines through, but not necessarily in a good way. What they’ve gained in maturity, they’ve seemingly lost in wit and charm that made their lyrics so interesting. Lead singer Matthew Murphy just seems tired and apathetic. Whilst band growth and maturity is unavoidable and frankly needed, it feels regressive rather than progressive.

To their credit, this isn’t a bad album. The production and overall performances are sharper than ever and there are moments that come close to rectifying the mixed bag that is the album in its entirety.

It just lacks a certain something that made the last three releases so iconic. There’s still everything that made them great, but this shift in direction may alienate some fans. I’m sure that this isn’t the last we’ll here from the trio but my goodness I hope this is the last underwhelming project they put out.