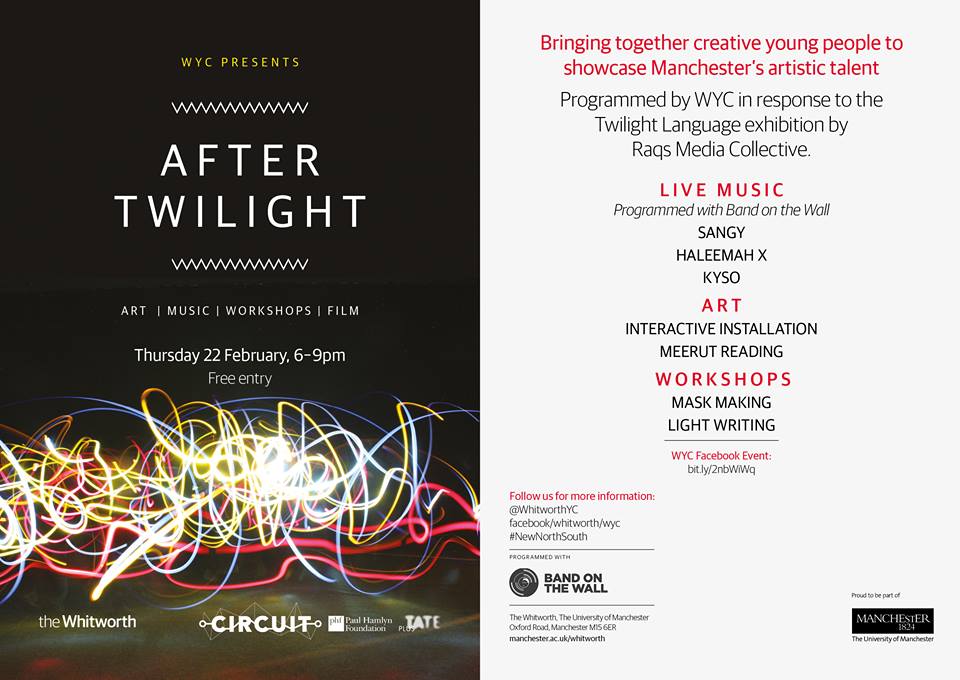 On the 22nd of February, the Whitworth opened its doors for an evening of art, music, film and workshops organised by Whitworth Young Contemporaries (WYC) in collaboration with Raqs Media Collective and Band on the Wall.

The event presented an artistic response to the current Raqs Media Collective Twilight Language exhibition at the Whitworth, which makes up part of Manchester’s New North South programme.

According to the Whitworth’s Youth Engagement Coordinator, Sally Thelwell, the event “came out of a project to engage more young people from the South Asian community”, an aim which is particularly relevant given the gallery’s position amidst Rusholme, Moss Side and Hulme – areas of Manchester which are renowned for their richly diverse populations.

Thelwell admitted that the Whitworth often “struggles to get young people from these communities to come to our events or to visit the gallery” therefore changing this reality was central to the stimulating evening of empowering drama, music, workshops and installations. To spark this change, Thelwell recounted how the WYC “employed two young artists [as curators]: Lubna Ali and Matilda Glen” who the Whitworth supported “to deliver outreach workshops in the community with local youth groups Youth on Solid Ground in Whalley Range and Hideaway in Moss Side.”

Young people were put firmly in the centre of the evening with the opening performance of Meerut by members of the WYC group. They read a script created by the young Manchester activist group, the Red Megaphones, in 1932. The performance called for public attention to the cruelty perpetuated by British Colonialism in the case of the Meerut Conspiracy Case whereby trade unionists were arrested for organising an Indian railway strike.

The members of the cast claimed that the play continues to be relevant eight decades on, as “human struggle has not ended.” Cast member, Ruby Sherwood Martin, claimed that “the exploitation that continues to occur in sweatshops as a result of capitalism’s dominance” is a modern issue highlighted by the performance. The group performed the piece standing on the steps leading to the Mezzanine gallery space to replicate how the Red Megaphones performed standing on steps in public spaces to render the message accessible to all, so “working class people could hear the message”’ being portrayed.

The theme of youth empowerment continued in the breath-taking performances of young talents from KYSO of the Hideaway group, who put together a series of acts ranging from singing, to dancing, to beatboxing. In an interview with the group, young dancer Asal Roostaei informed me that “everyone has a talent and KYSO helps you find it”. The founder of KYSO, Kemoy Walker told me how he established the group “in 2012 in response to the Government cuts in Manchester which left nothing for young people.” Through providing a support network for nearly 100 young people in Moss Side, the group “represents a diversion away from negativity” and an opportunity for self-expression to young people who often “get told they’re not worth anything.”

The young musical talent continued with performances from Manchester-based poet-rapper Haleemah X, who announced to the audience with a heavily ironic undertone: “I listen to people’s stories and make them my own, as my life is kind of dry!” Her songs bring to light the often taboo subjects of abusive relationships and their impact, body shaming and the issue of weird ex partners, which resulted in an unusual yet powerful combination of pathos and empowerment. Fellow up-and-coming Manchester musician, Sangy, followed Haleemah’s performance with a selection of his “underground rap” which presents an intimate insight into his coping mechanisms in life.

Thelwell described how whilst “music is always really important, it is also really important to [the WYC] to have a wide spectrum of arts, and of course not forget about the exhibition that is the basis of the event”, in this way in the background to the musical performances there were opportunities to interact in light writing and mask-making workshops.

The evening also included the interactive installation If the world is a fair place then… curated by Lubna Ali and Matilda Glen, which gave visitors the opportunity to leave a message in a time capsule to be opened in ten years’ time, and a film-montage of artwork from the WYC outreach programme with youth clubs Hideaway and Youth on Solid Ground.

Overall the WYC event, After Twilight put a spotlight on the young South Asian talent that often does not receive the recognition it deserves. Both young and old, new and regular visitors came together in the Whitworth for a night of activism and celebration of diversity presented through the lens of art, music and performance.

The Whitworth Young Contemporaries’ next event shall be ‘Lament’: a film produced by Thirty Pound Gentleman in response to Steve McQueen’s Ashes. 15th March 7-9pm.

For more info about WYC find them on Instagram: @WhitworthYC