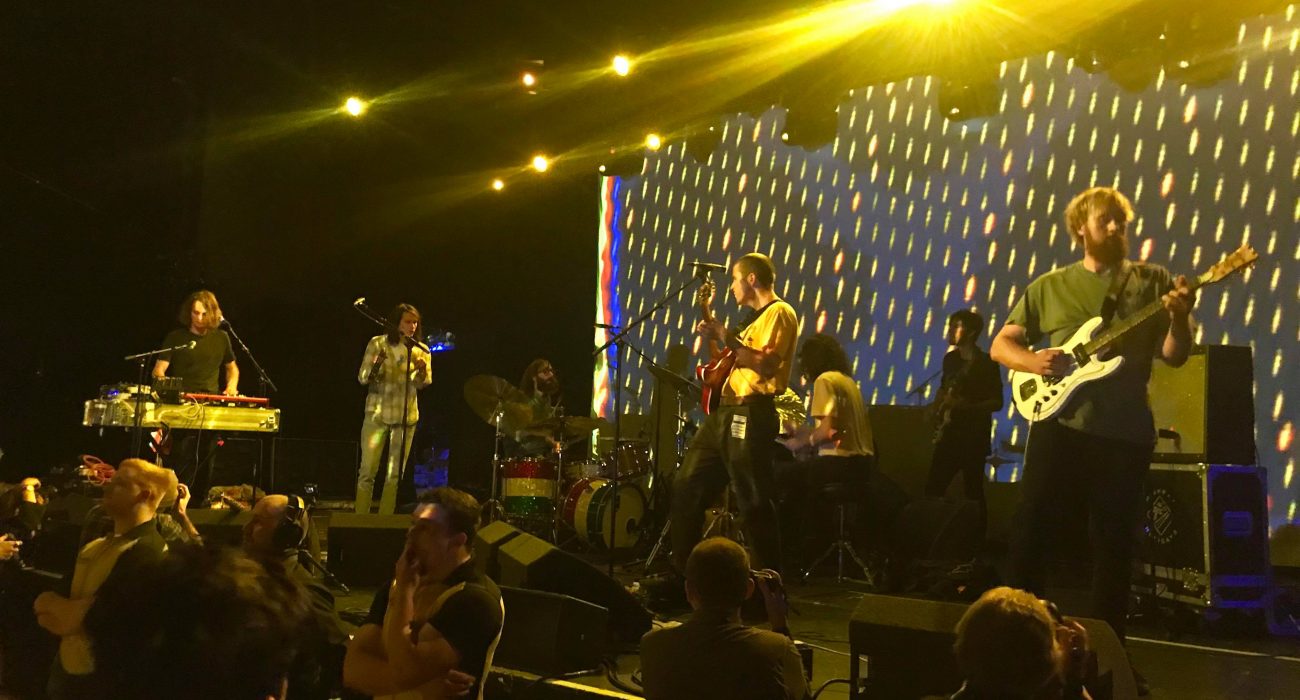 Melbourne made, seven-piece psychedelic, acid and experimental rock band King Gizz summoned every mystical creature and black magic practitioner you could think of at their sold-out Manchester Academy gig last Thursday.  Upon first listening to King Gizz, I was instantly plummeted into a world of mysticism, dark corners and psychedelia – something I have not felt so intensely since my days of obsessing over the Grandfathers of such rock including Black Sabbath and Rainbow.

Frontman Stu Mackenzie undoubtedly embodies the role of the Wizard. A feverish wizard who is leading his 6 other musical virtuosos through the bizarre and mysterious lands of King Gizzards. Stu’s stage presence was second to none with his tendency to throw and bend his upper half completely over during his face-melting guitar solos. His impulsive movements across the stage are coupled with his ability to play over 3 instruments, all of which were exhibited to the fervent crowd during their 2-hour set.

However, Stu is certainly not alone in his talents. Each of the 7 members are clearly multi-instrumentalist gurus who play a pivotal role in defining King Gizzard’s sound, unsurprising given their admirable ability to have written five albums in 2017 alone.

However, what really struck me with awe was the tight timing and slickness of Michael Cavanagh and Eric Moore on drums. The decision to position both drummers facing each other was incredible as it not only highlighted that they were effortlessly mirroring each other but also added far more intensity to their presence, creating a powerhouse of noise at the centre which resonated outwards.

King Gizz put on a 2-set show that transported its 2,600-capacity crowd to a different land with the highlights being ‘Crumbling Castle’, ‘Open Water’, ‘Lord of Lightening’ and ‘Gamma Knife’. The musical range of King Gizzard is outstanding and was displayed throughout the array of songs they played from each album, influences clearly deriving from progressive and garage rock to folk and even hints of a middle Eastern origin, all while paying homage to the lyrical thematic style of Ronnie James Dio embellished with riffs to the complexity of Tony Iommi.

There is nothing superficial about King Gizzard and the Lizard Wizard. Their entire image as 7 eccentric male Aussies with a burning passion for music comes as a package. You get the trippy vision tapes, you get the perfectly executed performance and you get to lose all your possessions in the mosh pits. A sign of a good gig, am I right?