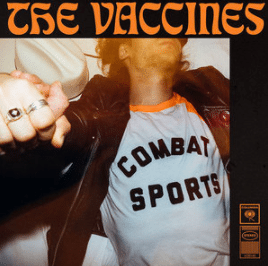 2015’s English Graffiti was a bold attempt by The Vaccines to reinvent themselves. It was an attempt to ditch the sun-drenched indie riffs for a deep, fuzzy, almost futuristic sound, but unfortunately, it didn’t really pay off.

Now seemingly aware of this mistake, The Vaccines have gone back to basics, leaving behind this over-saturated production in favour of what made them so likeable in the first place. Rather than rely on a sense of grandeur and trying to escape the ‘indie landfill’ stereotype that plagues so many mainstream bands from the last few years, Combat Sports harks back to their nostalgia-driven roots with confidence.

Opener ‘Put It On a T-Shirt’ has all the jangly guitar tropes of some 1960s doo-wop tune, but with a modern burst of energy, and is full of the nonsense lyricism that front man Justin Hayward-Young is known for. Single ‘I Can’t Quit’, which wouldn’t sound too out of place on their debut (or even an early Strokes album) is a reconnection to The Vaccines’ trademark hazy guitar slashing and swooning back-up chanting that is just dripping in angsty summer vibes.

There’s even moments where the band dip their toes into synth-pop with ‘Your Love Is My Favourite Band’ and ‘Maybe (Luck of the Draw)’, which are much more successful experimentations than any of the tracks found on English Graffiti. Of course, there’s also the obligatory slow-jam with ‘Young American’ smack bang in the middle of the album which gives us a nice dreamy break from the action.

The latter half of Combat Sports is nothing short of classic Vaccines vigour. The thumping, fuzzy whirlwind of ‘Nightclub’ packs a heavy punch, with Young delivering a fierce chorus designed to be screamed back at him during live performances. ‘Out On the Street’ is both lyrically and sonically addictive, making excellent use of Young’s vocal range and upbeat guitar melodies to create the best track on the album.

With the whole album clocking in at just over half an hour, Combat Sports sees The Vaccines performing at their best in years. It’s nothing short of a brilliantly polished reincarnation of the sunny charm that was absent from their last LPs. Whilst they’re not exactly reinventing the wheel here, the return to their classic nostalgic soundscape is welcomed with open arms.