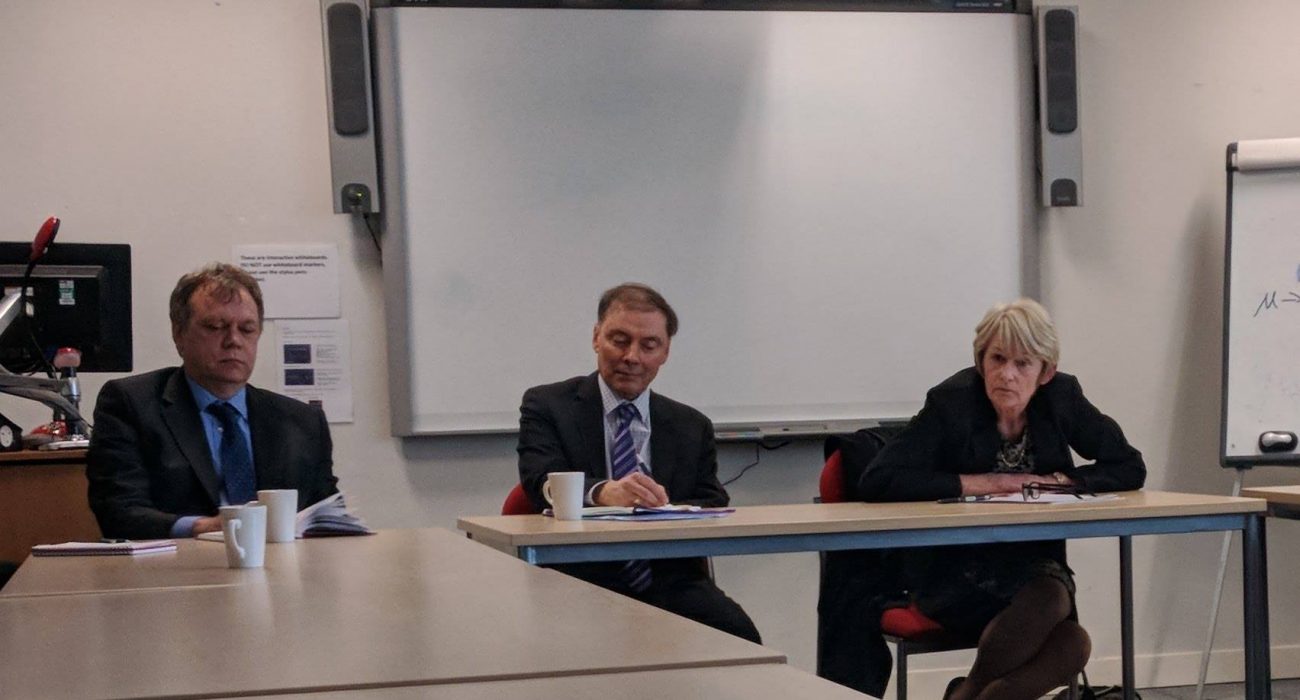 A degree is all we need to give you, say University

Following a question about the university’s ability to provide a satisfactory education during the pension strikes, Professor Clive Agnew (Vice-President for Teaching, Learning), told students “we have taken advice on this and the contract is to deliver a degree, that is the focus”.

Students report that this was followed by an outraged cry of “not an education?” from the audience, which was unanswered.

Students from the School of Social Sciences were invited to attend an open meeting on Monday 16th April, which was attended by senior university management including Vice-Chancellor Dame Nancy Rothwell. The meeting was an opportunity for students to pose questions to a panel about the university’s management of the University and College Union’s recent strike action.

Reddin told The Mancunion “I can’t say exactly what was going on in Nancy Rothwell’s head after that, but it is clear that she wanted to move on quickly. She knew he [Agnew] had said something wrong”.

The response reflects a larger concern that students might receive an overall degree, but that their educational experience has been extremely negatively impacted by the industrial action.

Students reported that the meeting attracted a large turnout, with attendee Louisa Rae Reddin suggesting “there are a lot of angry students. I think the turnout overwhelmed the panel; they weren’t expecting so many people”.

The Students’ Union representative Jack Houghton told the panel that the SU were pushing the university to cover the cost of graduation gown hire. This suggestion was reportedly met with sniggers from dissatisfied students, but Professor Agnew expressed his support, telling students “I’m actually quite keen to support that”.

One student asked the panel: “If there is a short fall for money for wellbeing that should be dealt with anyway. As much as students don’t want their education to be commoditised, the tuition fees that you charge have made it so, and this situation that we are in. Students are consumers”.

The student went on to state: “The Consumer Rights Act of 2015 states that services must be performed with reasonable care and skill, yet our services have yet to be performed, despite numerous requests to have lecturers rescheduled. It is the university’s responsibility to keep their staff happy, to deliver the product they have sold to students. The University of Manchester have failed to do this…will you be resigning from your post as Vice-Chancellor, and if not, can you please explain why you think it is appropriate for you to continue in your role”.

Rothwell responded, telling students “I may want to comment in the contract we have entered into with students in a moment…I wasn’t planning on resigning, no”.

She explained that reimbursed fees would not go back to students as individuals due to fees usually being paid through loans.

She continued: “This strike is not something we wanted, this pension deficit is not something we or I wanted, but as I have said throughout, our staff have a right to take strike action and we have not imposed on them a requirement to reschedule that teaching”.

A university spokesperson told The Mancunion: “The University appreciates that some students have been affected by the industrial action which has taken place and that understandably those at the meeting were concerned about the impact on their studies. We are in discussion with our Students’ Union about how we best deploy funds from the strike to support students and will reach a decision which takes all relevant factors and views into account. The views of students, submitted to the Students’ Union, would be welcome as part of this dialogue”.

Professor Luke Georghiou also responded to a request for comment, saying a statement would be released shortly regarding how the university will take student views into account.

Dorian Loetzer, one of the student leaders of the ‘Take Action! UoM’ group, told The Mancunion: “It seemed the university was more preoccupied with saying what they “cannot” do, rather than what they can. This was specifically felt when they commented on how students are yet to give them alternative solutions to the ones being suggested by the Students’ Union, implying that it is up to the student body to do their job for them, all the while not giving the student body the necessary information to perform that task”.

Reddin reported that there was an overwhelming feeling of dissatisfaction after the meeting. Dorian Loetzer also told The Mancunion: “We were quite disheartened by the meeting with some of the university leadership yesterday…discussions were kept short and isolated, there was little opportunity for follow-up, and answers were vague”.

Students were also critical of the Students’ Union’s role, with Reddin suggesting that they had been no real contact for students during the strike action, and that the idea of the university funding graduation gown hire being enough compensation was not enough.

Communities Officer Jack Houghton told The Mancunion that the decision to push for compensation to go towards graduation was the result of a survey sent out to students. The results apparently indicated that this was a top priority for students.

He continued to say: “I urge every single student who wishes to work with us on getting the best deal for students to come forward and meet us at the student union building. The SU wants as many opinions as possible, so we can continue to work with the university on getting a fair deal”.

Looking forwards, Loetzer said “Take Action! will continue to pressure university management using all the avenues available to us and will plan more escalating steps in the coming weeks. We encourage all students to find us on Facebook to inform themselves and get engaged”.

Vice-Chancellor Dame Nancy Rothwell is holding a series of open meetings across the university over the week. To find out more, visit the Take Action! UoM Facebook group.