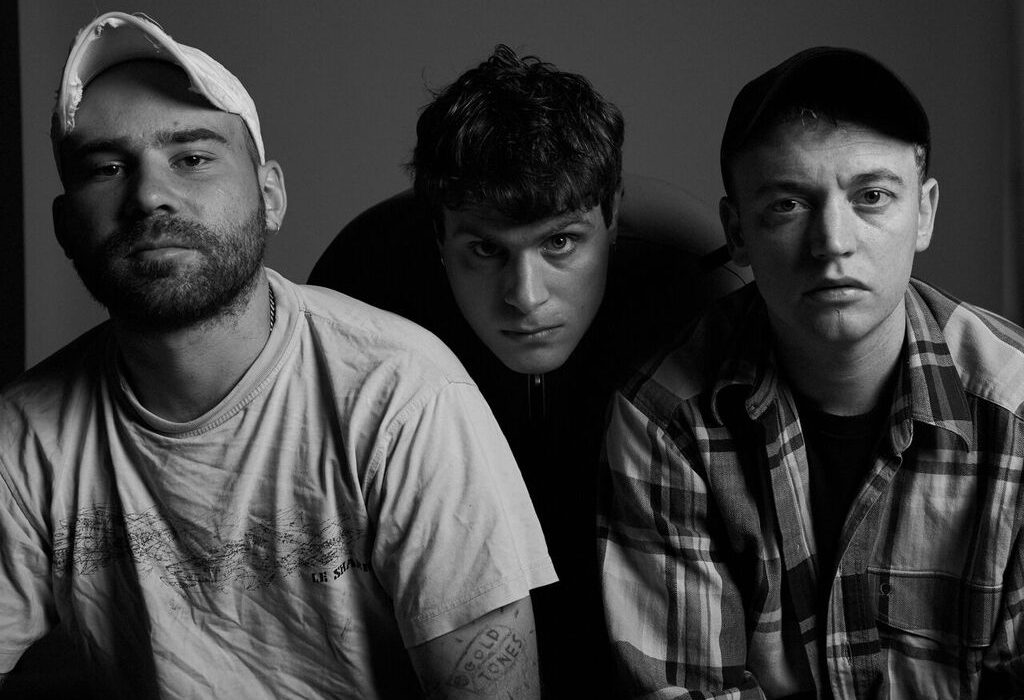 Everybody should have heard of DMA’S by now, the alternative rock trio from Sydney. They are rapidly gaining popularity at home and here in the UK with their guitar-heavy bangers and more tranquil tunes. Their latest single releases have offered a diverse array of sounds which have had fans buzzing, with ‘Break Me’ being as rowdy a track as ever for the boys. ‘In The Air’ provides a more mellow approach, which is the slightly more predominant vibe on their latest album, For Now, than it was on their previous release, Hills End.

One thing which remains consistent throughout DMA’S’ tracks are the melodic and engrossing tones of the singer, Tommy O’Dell. With their second album For Now released 27th April, I chatted with Tommy about the album, their tour and festivals, what is next for DMA’S and Chinese food…

Your new album, For Now, is out this Friday [27th April]. It’s sounding brilliant so far, how would you describe it yourself?

Maybe just a little bit more polished than Hills End. There’s more of an emphasis on production, less layering of guitars bit more minimal. Definitely, the vocals are pushed further upfront than the last record. So kind of maybe a bit more pop-y and less garage-y.

I think that’s the vibes we’re getting. What are your favourite tracks on the album?

I like ‘Time & Money’. We wrote that song throughout sound-checking early on in the Hills End tour. Then when we got back to Sydney and we had some time, we kind of refined it, kept the original demo drum beat and just re-recorded from there. I don’t know, something about that tune just strikes a nerve with me more than the others I guess.

Your UK tour starts this Friday [27th April] in Nottingham and you’re heading here to Manchester on Saturday [28th April]. Are you excited to be back in the UK?

Yeah, last time we were here I think it was like November with The Kooks, so it’s good to be back and doing our own shows and kind of just seeing how the record gets received when we play it live.

Your new album’s perhaps a little more mellow than Hills End, how do you think that that will impact the atmosphere at gigs, would make it a little different?

Yeah, it may do. I feel like when we have jams, the new songs in the rehearsal room take on a bit of a rockier edge than what the record does. Hopefully, there’s not too much of a disparity sonically between the tunes. Johnny [DMA’S’ guitarist]’s going to be playing the synth in some of the tunes this tour. So definitely a slight mood change, but if we write the set list in the right way then I think it should kind of work for our benefit.

What tracks can we expect this time on tour?

Probably like just under half new songs and then the rest old ones. We’re playing ‘Do I Need You Now?’, ‘Time & Money’, ‘Dawning’, ‘In The Air’, ‘Warsaw’, ‘For Now’, ‘Break Me’, so we’re playing a fair few, to be honest. It’d just feel weird coming out on a new tour [after having toured Hills End for a long time] if we didn’t come out and give the new songs a go. Hopefully, people don’t get the shit and want to hear old songs, but we’ll try to mix it up [laughs].

So you’re playing a number of festivals in the north over the next few months, [Reading &] Leeds Festival Radio 1 Stage – congrats for getting so high up the bill there – Neighbourhood Weekender, and you’re headlining Liverpool Sound City festival this following weekend [5th May].

Yeah, that should be good, I have some family from Liverpool so it’s nice to go back and play there and hopefully go watch my football team play, cause I think we’re playing on the Saturday and they’re playing on the Saturday too. Yeah, it’s all exciting, Neighbourhood Weekender has got quite a good bill. So it should be good. We love playing festivals, you kind of have to keep it short and sharp and energetic which is always good. Yeah, we’re all excited.

With that many northern festivals, you really are making an impression in the north. Having a look at all the upcoming shows [on tour], all of the ones that have sold out so far are in the north, I think that says something.

[Laughs] Yeah, I guess our sound has just resonated with some other Northern bands, you know, that kind of music.

Speaking of which you’re also supporting Liam Gallagher at Finsbury Park in June. What do you guys make of your frequent comparisons to Oasis? Do you agree with it?

Yeah, I agree with it definitely. When people say that’s our only influence I guess I don’t agree with that, but we’re definitely influenced by Oasis and a lot of those bands. I think it’s a good thing to be honest and to be supporting Liam Gallagher at Finsbury Park is mega, so yeah, I think it’s a positive thing for sure.

So where’s next for DMA’S? Are you guys keen to ‘break America’ as they say?

I don’t know, I haven’t really thought about it, to be honest. Just tour this record, see how it goes, hopefully, come back towards the end of the year and do another headline tour, play bigger venues, continue to write music on the road. Just keep plodding along, I think.

With the album being called For Now, are you suggesting that we might have to wait a little longer for new music?

[Laughs] No! No, it’s funny you say that, nah. For Now is just… when we first demoed the song ‘For Now’, we hadn’t – [laughs] – we hadn’t finished it, so we thought we’d just call it ‘For Now’ and that name stuck as a song title. Then I thought to hang on a minute, For Now, is actually a pretty cool record name. So we just had a few different ideas floating around and I think For Now was the coolest out of the bunch. But no, it doesn’t have any weird meaning [laughs].

I know you guys kind of have some interesting song-writing tactics, I saw that Johnny tweeted a little while back that when you were writing –

What’s he up to tweeting?

Well I actually, just yesterday, saw him [on Twitter] excited to be watching The Jeremy Kyle Show.

[Laughs] Oh yeah, he’s got his own persona online, hey I don’t know. I don’t know what he’s up to, I can’t keep track.

He was saying that when you guys wrote ‘Melbourne’ [on Hills End], the line ‘I will give you what you need’ was originally something like ‘I will always eat Chinese’?

Yeah no, that’s not true. Mind you we did turn that chorus into [sings] ‘and I will always eat Chinese’ in sound check as a laugh. But no, we didn’t originally write it like that. Well, I hope we didn’t anyway, pretty sure we didn’t. I do like Chinese food though, we all do.

Don’t we all? Well really good luck with the tour.

For Now is out now. Catch DMA’S on tour in numerous UK cities this April and May.