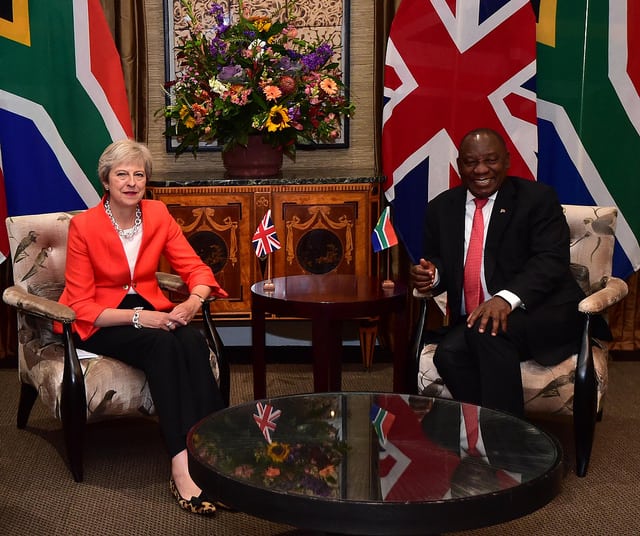 Theresa May’s recent trip to Africa saw her visit Kenya, Nigeria and South Africa, in order to recuperate relationships outside of the EU in the wake of Brexit. A perfectly legitimate course of action in the face of the terrifying economic isolationism on the horizon, however this trip was not just a coffee and a catch up. Rather, it was a calculated search for an easy replacement to the EU trade partners, preferably this time one which doesn’t demand as much in return. The Conservatives are seeking to retain dominate the economies of the Commonwealth and reap for themselves the benefits of new and innovative science and technology industries.

The openness with which government spokespeople described it as a mission to open up African markets for UK businesses smacks of a cynicism which denies, from the start, a genuinely egalitarian global partnership. This is despite the fact that Brexit provides the UK with the opportunity to expand trade outside of Europe, not only to distribute more evenly the benefits that globalisation provides but to deepen the cultural dialogue that should be the result of international trade and labour migration as well. Yet, perhaps unsurprisingly, this is not the attitude that the Conservatives and government departments such as the Department for International Development (DFID) have taken.

This is because the word ‘global’ has become skewed; fair trade, diplomatic equality, and ‘special relationships’ have become the preserve of Western Europe and America. The burgeoning relationships with Nigeria, South Africa, and Kenya are not replacements for the ties with the EU. The UK is not taking its African partners seriously, as it does with Western Europe, America or Australia, because international trade is still inextricably intertwined with imperialistic ideas of race and global hierarchy.

As is evident in a lack of commitment by May to change the system for Nigerians and Kenyans to attain work or study visas in the UK. This process is currently incredibly complicated and can be expensive. It has been raised by a number of African leaders, in particular the Kenyan President Uhuru Kenyatta, as an impediment to an equal and genuine partnership. However, despite the solidifying of all the agreements which benefit the UK, this particular sticking point has been glossed over. Arguably, the Conservatives are seeking to keep the friends in need at an arm’s length, willing to feed them with scraps but not to invite them to the dinner table.

The economic details of the new ‘partnerships’ announced in the wake of May’s visit reveal how the British government are prioritising their own financial gain regardless of the implications for those nations it claims to support in the Commonwealth. In Kenya DFID will be donating funding to a number of research projects whilst the Department for International Trade (DFIT) are supplying a “one stop shop of UK excellence and support”. A surprising gift given the UK’s lack of technological renown; it is doubtful anyone is particularly looking for British guidance when it comes to innovation. This quasi-missionary venture is clearly an attempt to be a mentor, which is perhaps not so much harmful as just patronising. When looked at alongside the refusal to equate with more open borders or study opportunities in the UK, the venture leaves a bitter aftertaste.

The rhetoric adopted towards the newly exploited African markets is deeply paternalistic and heavily rests on the idea that any interactions between the UK and African countries, namely those in the Commonwealth, is and always be, a form of international aid. For example, once major aspect of the renewed partnerships with African economies is the opening of new High Commissions in countries that up until now Britain has had little diplomatic interaction with, such as Lesotho and Eswatini. As well as the opening up of embassies in Chad and Mauritiana. However, the money for these is being taken out of the fixed Foreign Aid budget, despite it being borne out of our own necessity for partnerships outside of Europe. Furthermore, there is a distinctly military dimension to much of the future collaboration, the government are spending even more of the foreign aid budget on funding anti-extremism programs in Nigeria and Kenya.

Whether this paternalism is always intentional isn’t always easy to discern, but the British government, especially under the Conservatives, are finding it hard to shake an imperialistic tint to their actions. This points to the aforementioned skewing of globalisation which seems to excuse the UK being able to pick up or drop its African fellows as and when they chose, having the power in the global hierarchy to decide who reaps the benefits of growing economies.