Love for the Streets: Hidden Behind the Headlines

Love for the Streets threw their biggest party yet, all in the name of helping Manchester’s homeless
Societies

Some might think that throwing a twelve-hour festival in one of Manchester’s most popular nightclubs might be a bit too ambitious for a group of recent graduates and students looking to raise money for charity. The prospect of then holding this less than a day before the start of the university term might also have raised doubts. Love for the Streets, however, would disagree.

What was most impressive about Hidden: Behind the Headlines was the sheer scale of the production. It wasn’t just your typical club night with a few DJs and a couple of people helping out behind the bar. No, Love for the Streets had managed to secure a grand total of thirty one acts to play across the three rooms of Hidden. Not only that, but in true festival style there was a whole host of alternative entertainment for everyone to enjoy. 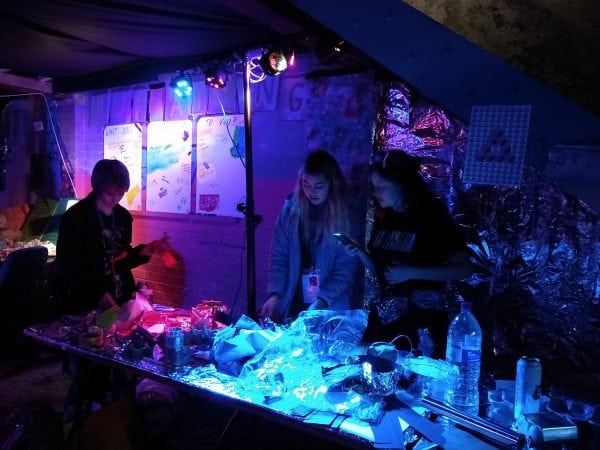 Avid readers of The Mancunion might remember our review of Funraising’s Brazilian Wax club night. They made an appearance once again, providing everybody with as many feathers, pipe cleaners, recycled card, and googly eyes as they could possibly want, resulting in some very funky headgear and a beautifully decorated display answering the question ‘what does Utopia mean to you?’. Love Specs, who raise money for charity by selling some very cute heart shaped glasses, were also on hand to glitter everybody up. Those that started feeling peckish during the twelve hours were also catered for, quite literally, by a range of curries and wraps. Forgot your waviest of garms? No worries, Fallow Garms spent the first half of the evening upstairs, leaving you to peruse their collection.

Of course, you can’t have a festival without music, and you could tell that Love for the Streets had put a lot of work into their line up. Consisting of a very funky mix of genres, from hip-hop to house to jungle, the mixture of live music and DJ sets certainly kept things interesting. Highlights included Phoebe Valentine of B.L.O.O.M, Manchester’s all-female DJ collective, Top Cat, and Kornel Kovacs. Despite the prospect of early morning university for some, there were some very questionable dance moves all the way up until 4am.

Born just over a year ago, Love for the Streets has enjoyed phenomenal success, engaging students in charity work and connecting them with Manchester’s homeless population, all through a variety of events, including conscious clubbing, art exhibitions at the Whitworth, and talks such as ‘Let’s Talk Homelessness: Looking at LGBTQ+ and Women’s Issues’. They’ve also been featured in Eventbrite’s Generation DIY, a series of short films looking at some of the UK’s most influential young promoters – all of whom are under the age of twenty five.

Their ultimate aim is to inspire more students to start volunteering using a commitment curve process. This starts with engaging with an event such as Hidden: Behind the Headlines, joining the online community that engage with homeless charities, and finally volunteering. According to research done by the Department for Digital, Culture, Media, and Sport (DCMS), 24% of young people between the ages of sixteen and twenty four currently formally (as part of an organisation) volunteer at least once a month, and now Love for the Streets are making it even easier for students to get involved. If you’re interested in getting to know more about the work they do, you can get involved through the Student’s Union or by messaging them on Facebook.