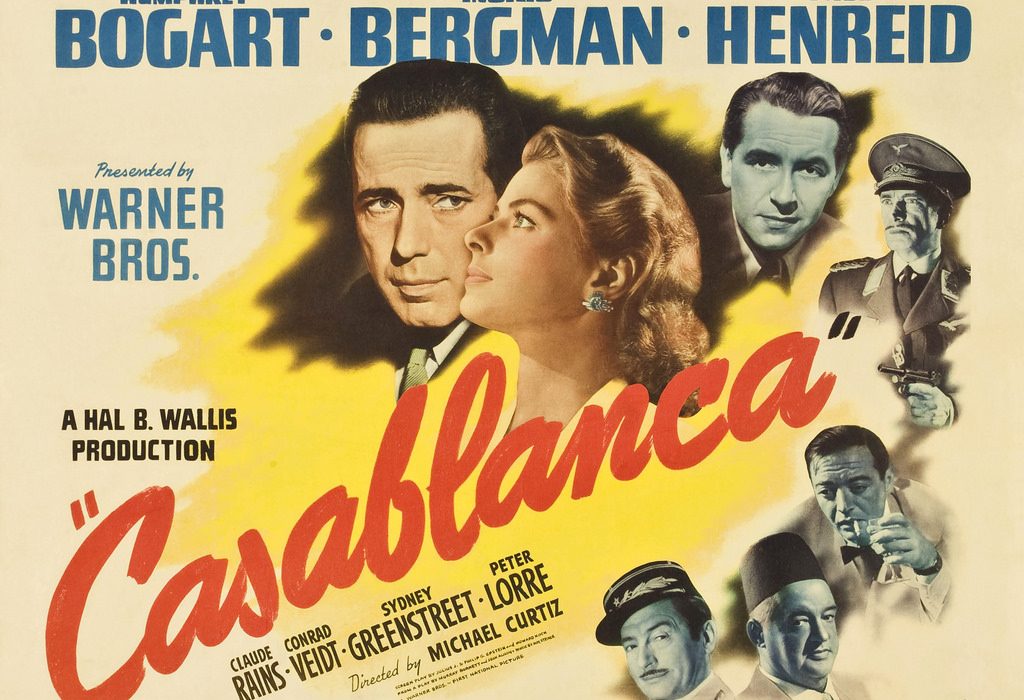 Casablanca is one of those films that should be taken seriously, yet enjoyed. At first glance, the film may be seen as just another lovey-dovey tale of a damsel in distress. Upon closer inspection, Casablanca is a romantic fantasy that has made an everlasting impact on the genre of romance and, most importantly, cinema as a whole.

A-list actors such as Humphrey Bogart, Ingrid Bergman, and Peter Lorre star in this 1940s Hollywood classic. Set during the dark, early days of WWII, the film starts off with the main protagonist Rick Blaine (Humphrey Bogart) running a nightclub in the titular city of Casablanca, Morocco.

Blaine is the type of character who carries around a heavy bag of melancholy and nostalgia with him everywhere, reminiscing about the ‘good old days’. Smoking cigars and drinking alcohol, Blaine drowns his sorrows to the thoughts of his lost lover whilst listening to the sensational masterpiece of  ‘As Time Goes By’.

Then, Blaine is forced to abandon his daydreams when his lost lover becomes found, by appearing at his nightclub one day. Ilsa Lund, played by the iconic actress Ingrid Bergman, steps back into Blaine’s life alongside her husband, Victor Laszlo. Faced with the nostalgic memories of a man she once loved, against a loving husband she now adores – which man is Ilsa running off with at midnight?

If romance isn’t your cup of tea, then you will be delighted to hear that darker themes such as the war, past versus present, sacrifice and loyalty are consistent in the film. All of these themes bind into one to make Casablanca an all-time classic. Its original release in 1942 gave the people of America and its allies hope and optimism towards winning WWII.

By using heroic characters such as Rick Blaine, the film demonstrates how there is light at the end of the tunnel by fighting for what you believe in. Even today, it is hard to ignore Casablanca for what it stood for and how its meaning remains to be relevant in the 21st century.

Casablanca is available to buy on DVD and Blu-Ray.