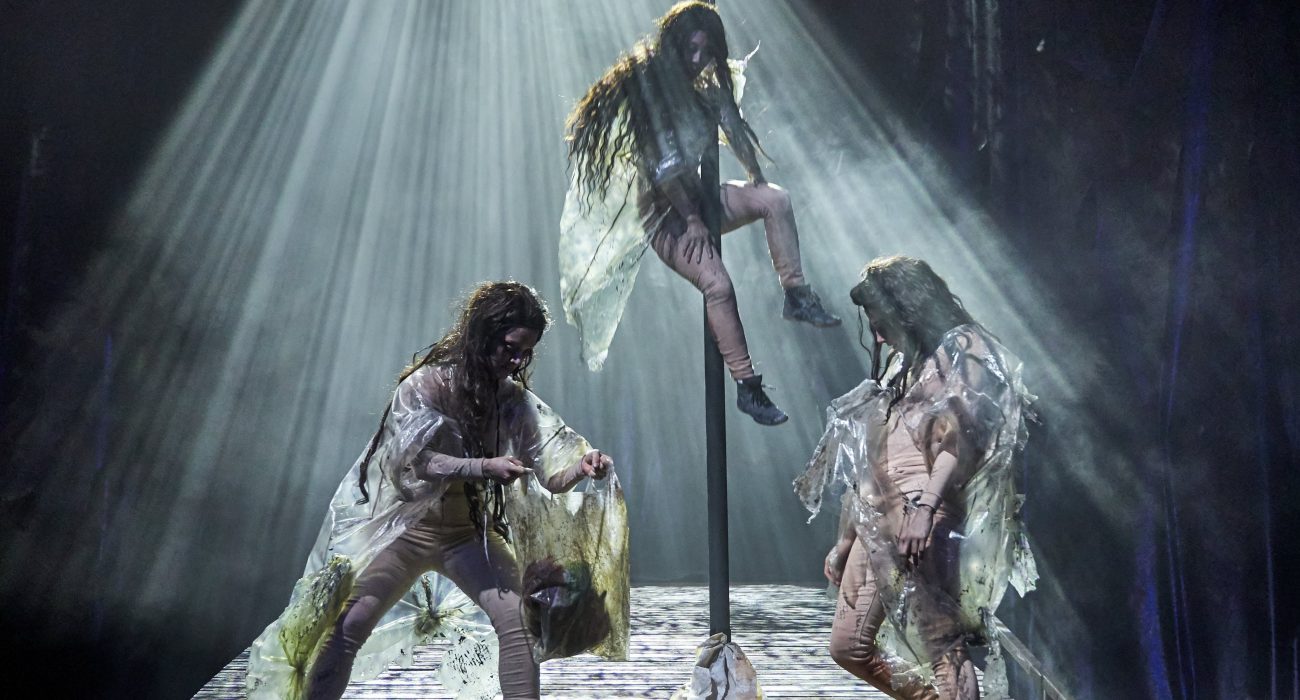 Rufus Norris’ visually impressive creation has visited theatres across the UK and Ireland, complete with a whole new cast, and perhaps proving to be a version of Shakespeare’s classic tragedy that favours style over substance.

Rae Smith, the creator the ‘War Horse’ set, designed once again a breath-taking set which as usual, doesn’t disappoint. We’re instantly drawn into the world of Norris’ ‘Macbeth’ as the witches appeared from a seemingly hidden alcove in the drawbridge-like set piece that dominated the entirety of centre stage. The dark and almost shadow-like witches flittered wildly across the stage before ascending up three poles with ease and assuming a rather impressive acrobatic position, all before the famous opening lines of the play.

Michael Nardone’s Macbeth and Kirsty Besterman’s Lady Macbeth provided an interesting dynamic in their portrayal of the power-driven relationship. However, neither manages to quite stand up to the overwhelming scale of the set they are working with. On multiple occasions their characters seem dwarfed by the enormity of the set, making some of the most poignant moments of the play lack intensity and drive – especially in the well-known dagger monologue.

Despite this, one of the stand out scenes for me, was the banquet scene in which Macbeth is confronted by the ghost of his deceased best friend Banquo (Patrick Robinson). Nardone’s portrayal of a man who truly believes what he sees, leaping around the stage in pure fear as Robinson’s Banquo ominously strides across the space, created a very moving scene and was essential in the audience having any connection with the character.

Another touching moment in the production was the scene after Lady Macbeth’s suicide, most ‘Macbeth’ productions only allude to her death when she throws herself from a rooftop. However, in Norris’s reimagining we see the set spin to reveal a far bloodier death – Besterman is slumped again a wall covered in blood. Nardone’s reaction to this is perfectly timed as he goes over and embraces the body of his dead wife, creating a real moment of tenderness, and showing just how broken Macbeth has become.

Overall the production contains a few poignant moments but the masterful set design overshadows all action taking place, the first half lacked pace and although it picked up in the second act it just wasn’t enough and I left the theatre feeling disappointed in what I hoped would have been a stellar performance given the reputation of the National Theatre.