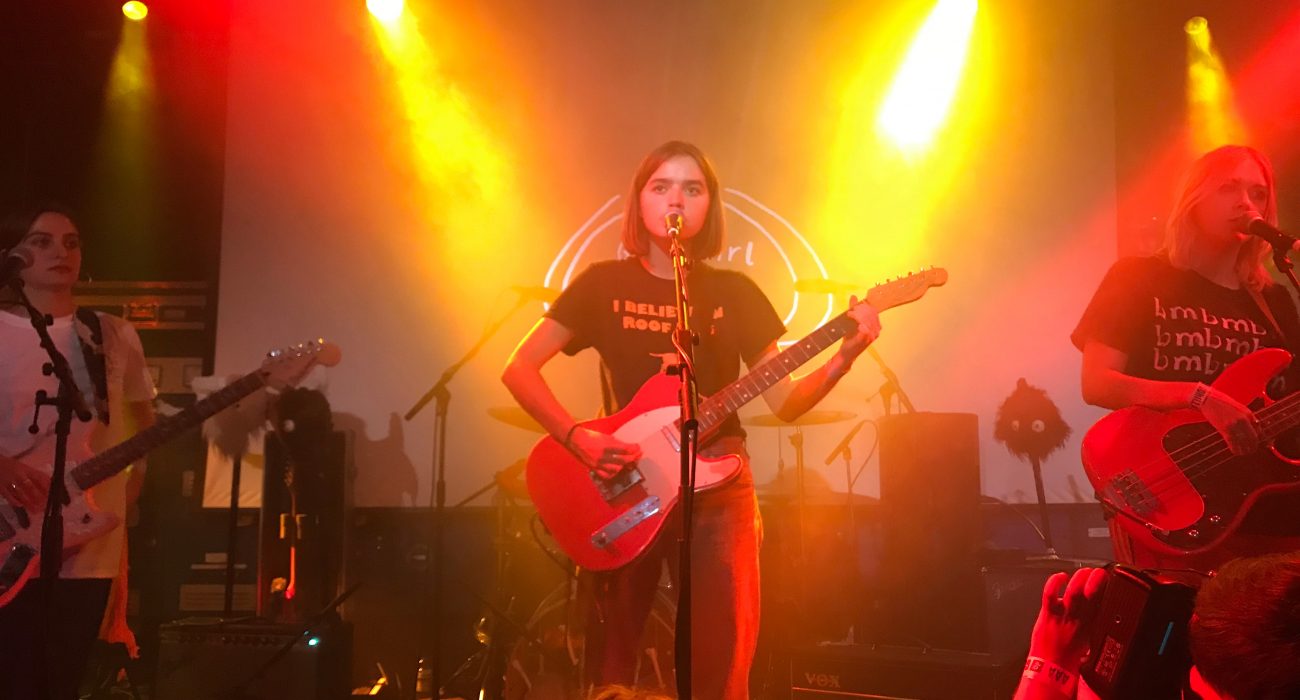 Consisting of four girls, the band have drawn attention to themselves with their interesting music on topics ranging from the UK’s political climate to creepy men looking at them on the train. As well as this, the band also have ambiguously amusing alter egos which they are known by: singer/guitarist Lottie ‘Clottie’ Cream, guitarist LED, bassist Naima Jelly, and drummer Rosy Bones.

The supporting acts for Goat Girl were rather more weird than wonderful, with American-based hip-hop/rap artist Sneaks providing the crowd with some incredibly wacky tunes along with some great dancing and amazing stage presence. Despite playing completely the opposite of the type of music you would hear from Goat Girl, she still managed to get the crowd very excited and geared up for the main event.

After the jagged prelude of ‘Salty Sounds’, Goat Girl came on stage in their true grungey fashion playing their murky and politically sparked song ‘Burn the Stake’. The setlist continued in an order almost identical to that on their acclaimed debut. Although they could have been slightly more courageous with their setlist, they do have an incredible flow of songs on their album so it’s hard to fault them for sticking with this order.

It did seem to take a couple of songs for the quartet to really get into the gig. Lead singer Lottie ‘Clottie’ Cream carried the band, however, and guided the crowd as the set progressed. Cream definitely seemed to enjoy the gig ever so slightly more than her fellow Goat Girls with the rest looking, admittedly, fatigued on stage.

However, the quality and sharpness of Goat Girl cannot be faulted for a second, especially due to their music being so finely tuned with never a note wrong or timing off. This makes their songs such as ‘The Man with No Heart or Brain’ even more impressive to hear live considering the time changes and complicated guitar riffs throughout. Seeing them play live makes it even more evident just how musically gifted this young group of girls are.

One standout song at the gig had to be ‘I Don’t Care Pt.1’; this song stands out if only due to the amazingly harmonious vocals from Lottie ‘Clottie’ Cream and lead guitarist LED. Other standouts include ‘Mighty Despair’ and ‘Country Sleaze’, which brought the gig to a riotous ending and left the crowd begging and cheering for an encore. Sadly, the crowd did not get what they wanted. Perhaps it would have made for a better ending to play their cover of ‘Tomorrow’ by Bugsy Malone, and then an encore of ‘Country Sleaze’.

All in all, Goat Girl are an incredibly talented and somewhat understated girl band who perfectly reflect this in their live performances. Seeing them play at Gorilla was an absolute privilege.