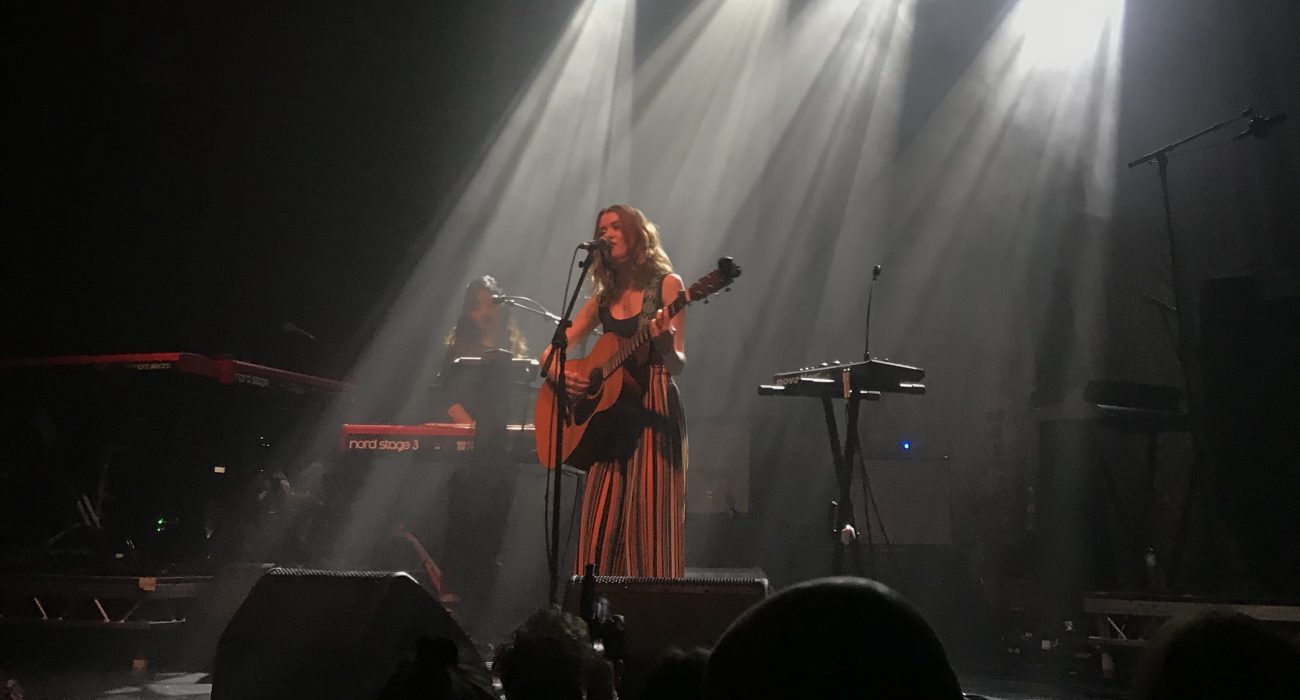 Maisie Peters is a singer-songwriter who oozes style, charm and confidence.  She also supported Tom Walker at a sold-out O2 Ritz, as their thriving tour of Europe continued.

At the mere age of 18 it is quite remarkable the maturity Maisie bestows in both her performance and song-writing. She gets a lot of this inspiration from her “own life, friend’s lives and other people’s music”. An example of this was a song “about being pied off by your driving instructor” — somewhat humorous in topic but intrinsically a powerful musical interpretation of unrequited love that hits deeper than expected. This is typical of Maisie’s music in general — something possibly ‘cheesy’ instead becomes soothing emotional melodic lines and clever poetics. It goes way beyond that classic ‘teenage romance’ trope.

Sincerity laces Maisie’s songs. Upon asking her about the importance of it in a piece of music she responded: “the biggest songs and those which last the longest are those that sound sincere”. She continued to explain how during the compositional process she considers “if a song is necessary in the world”, and if so concludes that “someone’s going to need that; proving a mark of a good song”. It is this awareness and interaction with the real-world that consequently roots her charming honest sound. Therefore, if it’s those kinds of songs that truly last the longest then she is most certainly one to watch.

Performing to a sold-out venue of 1500 would surely be nerve-wracking for most young artists, but not for Maisie. Speaking about this, she described a technique of “not thinking about anything” — what I would call ‘getting in the zone’ to some extent — to overcome any potential jitters. Backed by the talented multi-instrumentalist Christina, this mentality did not shut her off during the performance. Maisie was utterly engaging with the music and audience. She had a comforting and stylish confidence throughout emotional renditions of ‘Worst of You’, ‘Best I’ll Ever Sing’, and others.

This same likeable personality was reflected off stage, as she spoke with intelligence and an easy sense of humour. This likability also translates onto the platform of YouTube, on which she harbours nearly 40,000 subscribers. This online fan base proved a catalyst for the start of her journey, “falling into more stuff from there”, carving a musical career pathway of which she now “wouldn’t wish to do anything else”. With millions of streams on Spotify, Maisie described the sensation as being “distantly impressed with yourself, but also kind of incredulous”, feeling “super grateful to everyone that listens”.

These streams look set to continue with the recent release of ‘In My Head’ (featured on Spotify’s New Music Friday playlist). The song has already racked-up over 500,000 listens. It stands as an introduction to her new 6-track EP Dressed Too Nice For a Jacket, dropping November 2nd this year.

Voice, personality and intelligence combine to make Maisie a unique and compelling singer-songwriter. She wears her heart on her sleeve, gifting listeners with honest, natural music that’s sure to stick in your mind. The future looks incredibly promising for the 18-year-old and I can’t wait to see what’s coming next.