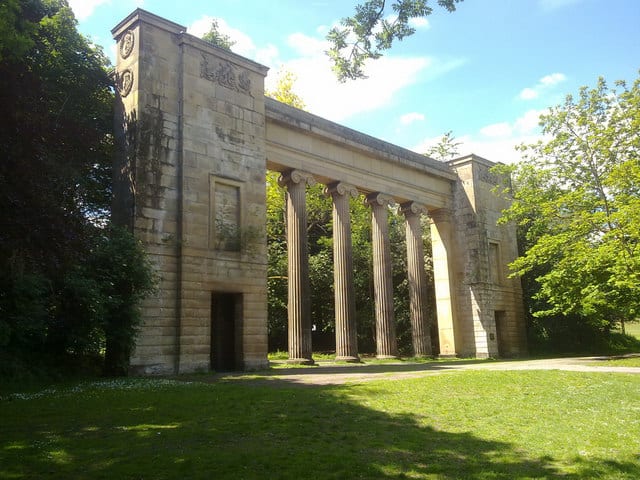 On the off-chance you manage to escape the Oxford Road bubble, swapping the linear path of the Magic Bus for the effortlessly winding Metrolink tram, there is an enchanted stretch of nature that calls from far across the metropolis.

Most only know it during its chaotic incarnation as “the place where Parklife’s at,” yet this betrays what is otherwise an oasis of tranquillity. Cleaner air and greener pastures await the exploring student in Heaton Park, whisking them far from the monotony of their daily concrete reality.

Turning a corner, next to a lake, a grand, neoclassical façade stands in the park. Far from the polished buildings of the city centre, this monument to the past is like a ruin. It’s an abstract thing, something that you can’t really imagine really exists when you read up on its history. Something a bit magic, like Stonehenge.

The Colonnade dates back to 1822, when Francis Goodwin designed it as the façade of the Old Town Hall on King Street. As we see all around us, gargantuan  structures of every type of brick and stone were erected around the city centre, showcasing the growing population, prestige and prosperity of the 19th Century ‘Cottonopolis‘. Soon, the Old Town Hall fell into obsolescence and Waterhouse’s 1877 Gothic town hall replaced it, embodying a city of a new order.

Town Halls are the grand civic sculptures that tell the stories of our cities; the story of the Colonnade is something of a story of the 19th Century in Manchester. After the public campaign to prevent the demolision of the Old Town Hall was successful, each of its elements, from the sandstone volutes of its ionic columns to its largest slabs of stone, were carried north toward Heaton Park.

In 1912, its stones were carefully reassembled in its current place, in a realm far detached from its previous setting of thick smog, punctuated by the sound of horses’ hooves and pressing civic matters.

The Colonnade is currently bordered by a modern and generic black metal fence, which can be seen as the 21st Century’s mark on this structure. Members of the local community have said the decaying structure has been left to rot, while the council claims it is exploring ways to fund the restoration of the dangerous old façade. Maybe one day we will breathe a new life into this once magnificent structure, and the shroud of the black perimeter fence will be lifted for good.